Pakistan has freed an Indian fighter pilot captured after his plane was shot down in Pakistan-administered Kashmir. 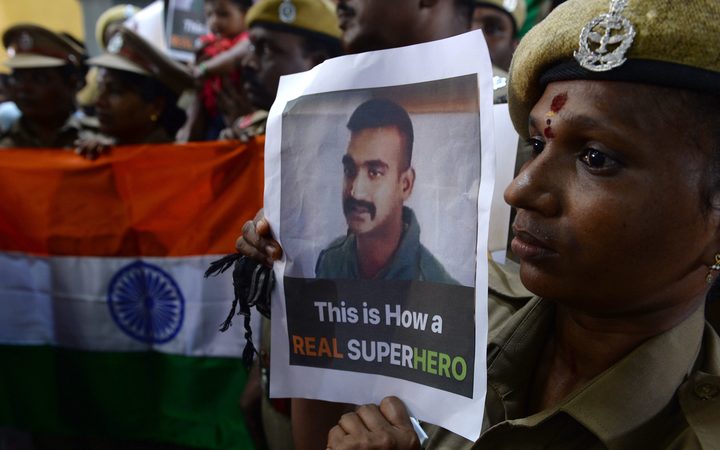 Indian security forces pose with the national flag and pictures of Indian Air Force pilot Abhinandan Varthaman during an event to pray for his return Photo: AFP

Wing Commander Abhinandan Varthaman was handed over to Indian officials near a border crossing with Pakistan.

Minutes earlier, the pilot said on Pakistani TV that he was "very impressed" by the Pakistan army.

India and Pakistan - both nuclear powers - claim all of Kashmir, but each controls only parts of it.

The pilot is being hailed as a hero in India, with fireworks being set off in the capital Delhi.

Crowds carrying banners and garlands had gathered on Friday at the symbolic Wagah border crossing - the only legal crossing between India and Pakistan.

The nation is proud of your exemplary courage.

Our armed forces are an inspiration for 130 crore Indians.

What does the pilot say?

In what appeared to be an edited statement aired on Pakistan TV, the wing commander described how he was shot down and rescued from an "agitated" crowd by Pakistani soldiers.

"The Pakistan army looked after me really well, they are very professional," the pilot said while in uniform, adding that he saw potential for peace.

What led to this moment?

Tensions between the two countries have escalated sharply in the past few weeks.

On Tuesday, India carried out air strikes on what it said was a militant camp in Pakistan in retaliation for a suicide bombing that killed at least 40 Indian troops in Indian-administered Kashmir on 14 February.

A Pakistan-based group said it carried out the attack - the deadliest to take place during a three-decade insurgency against Indian rule in Kashmir.

Pakistan - which denies any involvement in the 14 February attack - said it had no choice but to retaliate to the Indian raids with air strikes on Wednesday. That led to a dogfight and the Indian fighter jet being shot down in Pakistan-administered Kashmir.

What caused the tensions?

India and Pakistan have fought three wars since independence from Britain and partition in 1947. All but one were over Kashmir.

Tens of thousands of troops remain positioned on either side of the border in the disputed region.

The aerial attacks across the Line of Control (LoC) dividing Indian and Pakistani territory are the first since a war in 1971.

At the height of the tension Pakistan closed its airspace, disrupting major air routes. Partial operations have now resumed at four main airports, with the full resumption of flights expected next week.

"As a peace gesture we are releasing the Indian pilot tomorrow," Mr Khan told Pakistani lawmakers in the National Assembly on Thursday.

On Wednesday he pushed for talks with Delhi to prevent the risk of a "miscalculation" between the nuclear-armed neighbours.

What happened to the pilot?

Pakistan's military spokesman said that Pakistan fighter jets had carried out "strikes" - exactly what they did remains unclear - in Indian-administered Kashmir on Wednesday.

Two Indian air force jets then responded, crossing the de facto border that divides Kashmir. "Our jets were ready and we shot both of them down," Maj Gen Asif Ghafoor said.

He said that one Indian pilot was in the custody of the Pakistani army.

Images then circulated of Wing Commander Abhinandan Varthaman's capture, which were condemned for what appeared to be a physical attack at the hands of residents in Pakistan-controlled Kashmir, but also praised because of the actions of the Pakistani soldiers who intervened to create a barrier.

Pakistan's information ministry published - but subsequently deleted - a video showing the blindfolded pilot, who could be heard requesting water, just after he had been captured.

In later footage, he could be seen sipping tea from a cup without a blindfold.

India's foreign ministry later issued a statement demanding the release of its fighter pilot and condemning the images, describing them as a "vulgar display of an injured personnel".

The pilot's family have not yet commented on the events.