The UN has expressed concern about the fate of some 200 families reportedly trapped in the last tiny area of Syria still held by the Islamic State group. 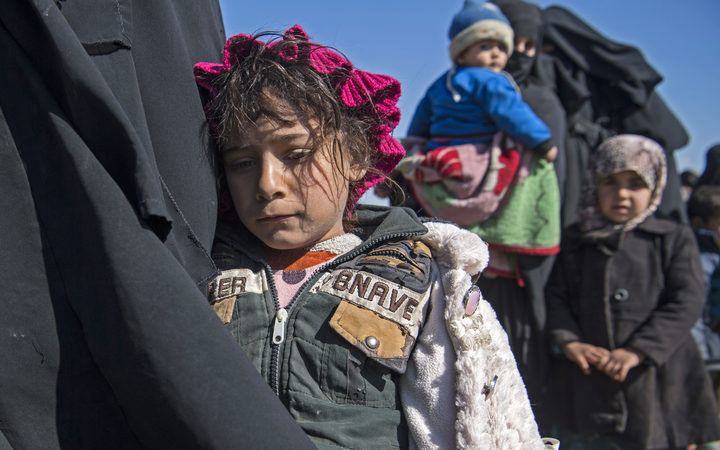 Some 20,000 people have fled Baghuz in recent weeks. Photo: AFP

Human rights chief Michelle Bachelet said they were apparently being prevented from leaving by IS militants.

They were also being subjected to intense bombardment by US-led coalition and allied Syrian forces, she added.

On Tuesday evening, dozens of lorries reportedly arrived on the outskirts of the IS enclave to evacuate civilians.

The Syrian Observatory for Human Rights, a UK-based monitoring group, cited its sources as saying wives and children of militants would be taken to an undisclosed location as part of a deal with the coalition.

Earlier, it reported that a request by militants to be given safe passage to the opposition-held Syrian province of Idlib or neighbouring Iraq had been rejected by the US-backed Syrian Democratic Forces (SDF) alliance.

SDF spokesman Mustafa Bali appeared to dismiss such an idea on Tuesday morning, insisting the militants had "only two options - either they surrender or they will be killed in battle".

"We are working on secluding and evacuating civilians and then we will attack. This could happen soon," Mr Bali was quoted as saying by AFP news agency.

Five years ago, IS controlled 88,000sq/km (34,000sq/miles) of territory stretching from western Syria to eastern Iraq.

It proclaimed the creation of a "caliphate", imposing its brutal rule on almost eight million people and generating billions of dollars from oil, extortion, robbery and kidnapping.

Now, an estimated 300 militants and hundreds of civilians are surrounded inside about 0.5sq/km (0.2 square miles) of land in the Baghuz area, which is in the Middle Euphrates River Valley, near the border with Iraq.

"Civilians continue to be used as pawns by the various parties," Ms Bachelet said.

"I call on them to provide safe passage to those who wish to flee, while those wish to remain must also be protected as much as possible.

"They should not be sacrificed to ideology on the one hand, or military expediency on the other. If protecting civilian lives means taking a few more days to capture the last fraction of land controlled by [IS], then so be it."

Although no-one has reportedly made it out of Baghuz in the past three days, some 20,000 civilians have been taken by the SDF to a makeshift camp for displaced people at al-Hol, in Hassakeh province, in recent weeks.

Among them are the wives and children of IS militants and many foreign nationals, including the British teenager Shamima Begum, who was 15 when she ran away from her home to join IS four years ago.

The International Rescue Committee (IRC) said on Monday that at least 62 people had died on their way to al-Hol, two thirds of them children under the age of one.

Exhaustion and malnutrition were the principal causes of the deaths.

Ms Bachelet also said she was alarmed by an upsurge in attacks and civilian casualties in Idlib province, where a takeover by a jihadist group linked to al-Qaeda, Hayat Tahrir al-Sham, has jeopardised a truce brokered by Turkey and Russia in September.

The Syrian government's bombardment of a demilitarised buffer zone, which runs along the frontline in Idlib and areas of northern Hama and western Aleppo provinces, started to escalate in December and has further intensified in recent days, according to the UN.

At the same time, there has been an increase in fighting among rebel and jihadist factions, and also in the use of improvised explosive devices (IEDs) in areas they control.

On Monday, at least 16 civilians, including women and children, were reportedly killed by two bomb explosions in the Qusour district of Idlib city.

The second blast appeared to have been designed to kill those, including medical workers, coming to the aid of victims of the first.

Another nine civilians, including four women and two boys, were meanwhile reportedly killed by government strikes on Khan Sheikhoun on Friday and Saturday.