One body has been seen in the underwater wreckage of the plane that was carrying footballer Emiliano Sala and pilot David Ibbotson. 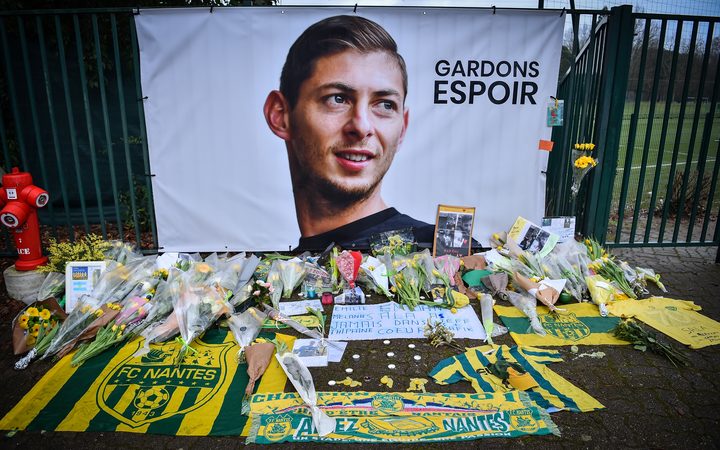 Emiliano Sala vanished during a flight from Nantes, western France, to Cardiff in Wales. Photo: AFP

A search on Sunday found the Piper Malibu plane on the seabed off Guernsey, almost two weeks after it went missing.

It added it was now considering the next steps.

The "substantial amount of wreckage" of the plane, which went missing on 21 January, was found on Sunday morning after a privately-funded search began.

The flight had been carrying Argentine striker Sala, 28, and pilot David Ibbotson, 59, from Nantes, north west France, to Cardiff after Sala completed his £15m move to Cardiff City.

n a statement, the AAIB said: "The remotely operated vehicle (ROV) carried out a further search of the area overnight, but did not identify any additional pieces of wreckage.

"Tragically, in video footage from the ROV, one occupant is visible amidst the wreckage. The AAIB is now considering the next steps, in consultation with the families of the pilot and passenger, and the police."

The AAIB added it intends to publish an interim report within a month of when the accident happened.

A decision has yet to be taken on whether to raise the wreckage to the surface.

Oceanographer and marine scientist David Mearns confirmed the wreckage had been found on Sunday, about 63m (207ft) underwater, after "a couple of hours" of searching the seabed.

The AAIB ship remained in place, sending down a remotely controlled submersible overnight, which captured the footage of the wreckage.

Speaking on Radio 4's Today programme on Monday, Mr Mearns said: "We located the wreckage of the plane on the seabed at a depth of about 63m within the first couple of hours [of searching]."

He said the plane was identified by sonar, before a submersible with cameras was sent underwater and was able to confirm it was the plane.

"They saw the registration number and the biggest surprise is that most of the plane is there - we were expecting to find a debris field." he added.

Mr Mearns said he approached the Sala family offering his services after seeing an emotional plea from Romina, the footballer's sister.

He said: "We wanted to go out there and find plane. We're pleased that that happened.

"It's going to be, people use the word closure, but this is just the first step. It's a long, long way. But at least this is the route for people, for them, to have answers.

"That said, if they never had these answers, if the plane was never located, I don't think the family would ever rest."

Meanwhile, Cardiff City football club said it was "actively considering" what to do with the tributes to Sala and Mr Ibbotson which have been left outside the stadium.

A growing number of items, such as scarves, flowers and football shirts, have been laid around the statue of the club's FA Cup-winning captain Fred Keenor over the past two weeks.

A spokesman said it will make a decision soon.

An official search operation was called off on 24 January after Guernsey's harbour master said the chances of survival were "extremely remote".

Cushions believed to be from the plane were found on a beach near Surtainville, on France's Cotentin Peninsula, last week.

There were emotional tributes to the footballer as Cardiff played their first home game since the disappearance on Saturday.

The club's manager, Neil Warnock, said he felt Sala was "with" his team as they beat Bournemouth 2-0 in the Premier League.