Australian Defence officials have revealed two RAAF fighter jets were involved in a bombing mission in Iraq that led to the death of up to 18 Iraqi civilians. 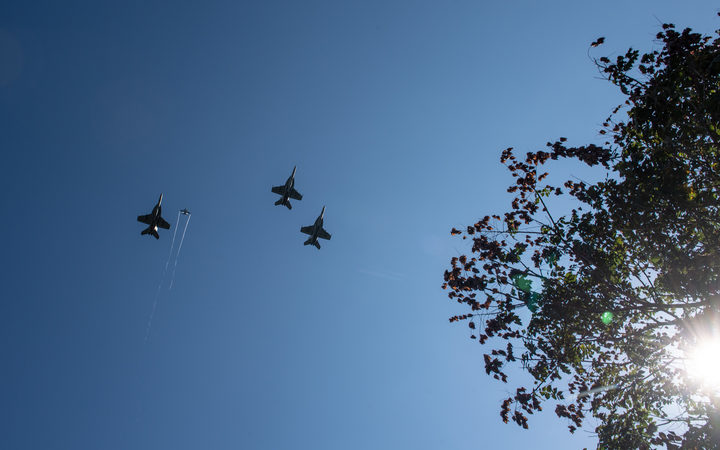 The incident occurred in June 2017, at the height of the bloody battle by Iraqi and Coalition forces to retake the northern city of Mosul.

Two F/A-18F Super Hornets were among the jets deployed to the area, both dropping GPS-guided missiles on the targets.

But Australian officials have now confirmed there were innocent civilians in the proximity of the blast.

"The Coalition assesses that between six and 18 civilians may have been killed, and that's based on an assessment of population densities," Air Marshal Mel Hupfeld, Chief Joint Operations revealed.

"It's not possible to determine if the civilian casualties occurred as a result of the Australian airstrike, the nearby Coalition airstrike, or other actors."

Air Marshal Hupfeld said Australian forces would never take part in such strikes unless satisfied there was minimal risk, based on the advice from the Iraqi forces.

"We do know from our review of events that our air crew made no error in this mission," Air Marshal Hupfeld said.

The first reports of significant casualties were published by the website Airwars, which monitors harm to civilians as a result of airstrikes in the Middle East and North Africa.

The website initially suggested up to 50 people could have been killed.

Some local reports suggested the innocent victims could have been families.

Australian officials were informed in January 2018, and a 12-month investigation followed. Investigators did not travel to the site of the airstrike as part of their inquiries because of the delay in becoming aware of the reports.

Air Marshal Hupfeld conceded that had it been clear civilians were close by, the airstrike would never have been allowed.

But, he is not prepared to blame Iraqi security forces for the situation, arguing they were under extreme pressure from IS fighters at the time of the attack.

"The assessment was that … the likelihood of civilian casualties or the civilians present there was low, but there's always the likelihood," he said.

"The action in Mosul was the most ferocious air campaign that we have seen in our generation.

"It is an unfortunate consequence of war that these civilian casualties have occurred."

Australia's bombing mission in the region finished at the end of 2017.

There have been more than 30,000 Coalition air strikes in the region, and the Australian Defence Force said it would thoroughly investigate any alleged civilian casualties in missions involving RAAF aircraft.

Air Marshal Hupfeld said any claims of compensation would be dealt with by the Coalition's central command, and not directly by the ADF.

Victims' families may be entitled to redress

AirWars, a London-based NGO that tracks the international air war against Islamic State using local sources, first reported the civilian casualties from the strike in June 2017 on its website.

"We had half a dozen separate reports from the ground [on the day]. We knew that all of the victims came from one extended family and four families within that larger family," director Chris Woods said.

"We have four specifically-named victims in this incident and one of them was the Imam of the local mosque. His brother also died and two close male relatives as well."

Mr Woods said the strike occurred at a time of heavy fighting around Mosul.

"This was a fast decision process, I would assume, that the strike was called in quickly," he said.

Mr Woods said the admission of involvement may also entitle the victims' families to redress.

"We're not in any way saying that ADF has been unlawful in its actions," he said.

"We do think it's behaving in a mature and responsible manner in accepting its role in this event, stepping forward, accepting responsibility and this also opens of course the door to the affected family to reach out for potential compensation from the Australian Government for the harmed caused."

In 2017, AirWars assessed that there were between 34 and 50 civilian casualties but Mr Woods does not dispute the ADF's lower number.

"Of the 14 international members of the US-led coalition against ISIS only four have ever admitted to causing harm from their actions. That's the United States, Australia, the Netherlands and the UK," he said.

"We used to be very critical of the ADF for its poor transparency. That did improve towards the end of the ADF's active military role.

"And we've also seen significant improvement in ADF assessment of civilian harm cases and also being transparent and open about their findings when they reach conclusions. This is positive and this is something we'd like to see other militaries follow".