Melbourne Cup-winning horse trainer Darren Weir and two other men have been arrested in police raids at Weir's Victorian properties. 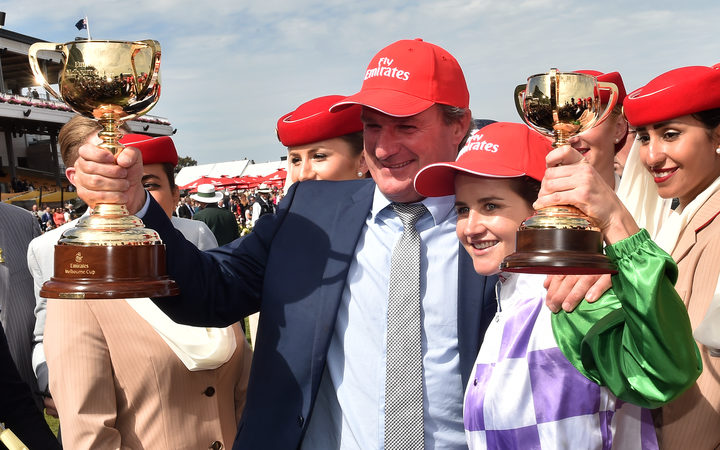 Victoria Police said the raids were part of a Sporting Integrity Intelligence Unit investigation into alleged corruption in racing.

In a statement, police said the men were arrested for questioning as part of an investigation into suspected offences including obtaining financial advantage by deception, engaging in conduct that corrupts or would corrupt a betting outcome, use of corrupt conduct information for betting purposes, attempting to obtain financial advantage by deception.

At the end of last year, harness racing in New Zealand was rocked by allegations of race-fixing.

It's believed that a number of high profile figures in harness racing were the target of raids around the country.

Most of those accused have been granted name suppression and are due to appear in court this year.

In a statement, Racing Victoria's general manager of integrity, Jamie Stier, said the police raids were linked to an investigation by the racing body.

"Racing Victoria's Integrity Services team has been conducting an investigation into the activities of licensed persons in the Warrnambool and Ballarat areas," he said.

"During the course of our investigation we sought the support of Victoria Police's Sporting Integrity Intelligence Unit."

"Racing Victoria is committed to maintaining the highest integrity standards in our sport and, where appropriate, we will continue to work with Victoria Police on those investigations."

Police said a firearm and "what is believed to be a conducted energy device" were also seized.

Weir has a high-tech training facility at Miners Rest and a beach stable in Warrnambool.

Police searched a truck at the trainer's Miners Rest property this morning, going through its cab and the vehicle's exterior.

Victoria's Racing Minister, Martin Pakula, said he was aware of the police investigation and did not want to say anything to prejudice its outcome.

"I would simply say as a racing fan and as the Racing Minister, integrity in our sport is incredibly important and any allegation of a breach of the rules of racing is extremely disappointing," he said.

"It is important to note that this is another demonstration that our racing integrity unit within Racing Victoria will pursue any matter without fear or favour, and that is clearly what they have done."