Unchecked climate change will cost the US hundreds of billions of dollars and damage human health and quality of life, a US government report warns. 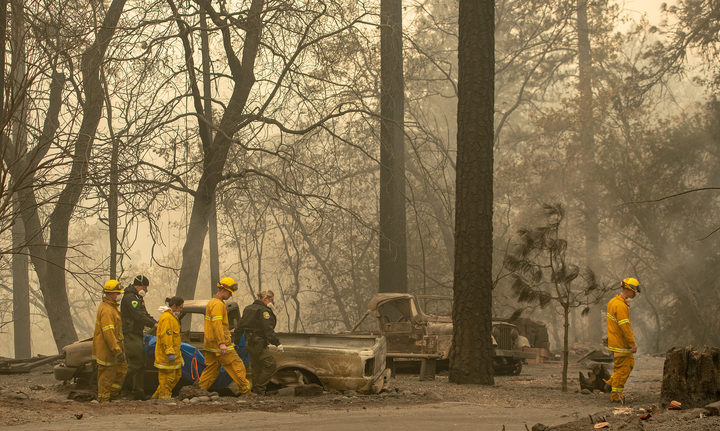 The report warns that the frequency of wildfires could increase if climate change is unchecked. Photo: AFP

"Future risks from climate change depend... on decisions made today," the 4th National Climate Assessment said.

The report said climate change was "presenting growing challenges to human health and safety, quality of life, and the rate of economic growth".

The warning is at odds with the Trump administration's fossil fuels agenda.

The world's leading scientists agree that climate change is human-induced and warn that natural fluctuations in temperature are being exacerbated by human activity.

What does the report say?

The US climate assessment - compiled with help from numerous US government agencies and departments - outlines the prospective impacts of climate change across every sector of American society.

"With continued growth in emissions at historic rates, annual losses in some economic sectors are projected to reach hundreds of billions of dollars by the end of the century - more than the current gross domestic product (GDP) of many US states," the report said.

"Without substantial and sustained global mitigation and regional adaptation efforts, climate change is expected to cause growing losses to American infrastructure and property and impede the rate of economic growth over this century."

The report notes that the effects of climate change are already being felt in communities across the country, including more frequent and intense extreme weather and climate-related events.

But it said that projections of future catastrophe could change if society worked to reduce greenhouse gas emissions and "to adapt to the changes that will occur".

Environmental groups said the report underlined their demands for action.

Brenda Ekwurzel, director of climate science at the Union of Concerned Scientists and one of the report's authors, said the report made it clear that climate change was not "some problem in the distant future".

"It's happening right now in every part of the country," she said.

What does Trump say about climate change?

In October, President Donald Trump accused climate change scientists of having a "political agenda", telling Fox News he was unconvinced that humans were responsible for the earth's rising temperatures.

After taking office he announced the US would withdraw from the Paris climate change agreement, which commits another 187 other countries to keeping rising global temperatures "well below" 2C above pre-industrial levels.

At the time, Mr Trump said he wanted to negotiate a new "fair" deal that would not disadvantage US businesses and workers.

During his election campaign in 2016 Mr Trump said climate change was "a hoax". However he has since rowed back on that statement saying in a recent interview: "I don't think it's a hoax, I think there's probably a difference."

Earlier this week, the US president appeared to deride the idea of climate change in a tweet about the weather.

Brutal and Extended Cold Blast could shatter ALL RECORDS - Whatever happened to Global Warming?

How great is the climate threat?

A report released in October by the Intergovernmental Panel on Climate Change (IPCC) - the leading international body evaluating climate change - said it could only be stopped if the world made major, and costly, changes.

That means reducing global emissions of CO2 by 45 percent from 2010 levels by 2030, and reducing coal use to almost zero and using up to 7 million sq km for land energy crops.

If the world fails to act, the researchers warned, there would be some significant and dangerous changes to our world, including rising sea levels, significant impacts on ocean temperatures and acidity, and the ability to grow crops such as rice, maize and wheat.