One hundred and fifty New Zealand academics have penned an open letter to the government demanding it take bold action in response to climate change. 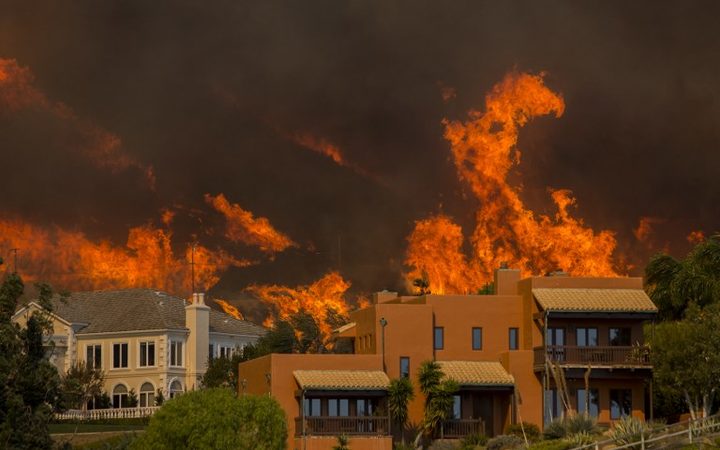 The current fires in California are a window into the future of climate change's impact on Earth, says Professor James Renwick. Photo: Getty Images / AFP

The letter said it was unacceptable that future generations would have to bear the "terrifying consequences of climate breakdown".

One of its authors, Victoria University Professor James Renwick said it was frustrating things were not moving faster.

"The message from the science hasn't really changed for 40 years. If the process had been initiated when the whole IPCC (Intergovernmental Panel on Climate Change) process started in the 1980s I don't think we'd be having this conversation today."

He said the speed of action needed to be similar to mobilisation efforts in war-times.

"[At the] beginning of World War Two, governments were able to just redirect effort into the war effort away from whatever else was going on before that and it's that level of commitment and rapid mobilisation that we really need.

"We're talking about the energy production for the whole global economy having to change pretty significantly."

Professor Renwick said the New Zealand government was heading in the right direction and saying the right things - it just had to move quicker.

"A lot of people and a lot of policy makers don't appreciate the scale of the damage and the cost and the losses involved if we don't tackle the problem.

"It's the policy process and the discussions that go on under the United Nations Framework Convention on Climate Change, the Paris Agreement and so on ... there's a meeting every year, one very soon, there will be one in 2020 where governments check in on how they're going.

"That's all very well but it's becoming very clear that we need action as quickly as possible and my sense is the usual policy process just isn't fast enough."

He said there were a number of changes that were in the pipeline that could be pushed forward.

"One hundred percent renewable electricity, incentivising electric vehicles and public transport. Emissions in New Zealand over the last couple of decades have mostly been in transport and industry energy production so those are areas where we have solutions to hand, but changes could be brought in at a more accelerated rate.

"In agriculture, in a way it's a harder problem but we could be looking to change the mix of land uses, maybe reducing stocking numbers."

The letter referred to the recent IPCC report which sent a strong message about the seriousness of the situation.

Scientists in the report warn in 12 years global emissions must be halved to avoid warming of more than 1.5 degrees.

"We know if we let it get beyond that there are all sorts of risks around damage to eco-systems, possible acceleration of sea-level rise and so on. There's some pretty difficult consequences not that far down the track now."

He said the upfront cost would be a lot, but New Zealand did not have a choice.

"The fires in California are a bit of a window into the future ... the costs of this could be catastrophic. I don't know how you can quantify the value of a whole town burning down.

"The cost upfront is really about sending the right kind of signals to the business sector and to society at large that this is definitely where we need to be heading and we need to be on that track really quickly."

He said once the direction was set, the economy would adapt.

"If you're the company that comes up with a better electric vehicle or a better solar panel that'll be valuable so it's not as though it's all cost."

While the letter was aimed at hurrying along government-level change, he said individuals could start making changes now.

"Eat less red meat, burning less fossil fuels by not taking the car as much, building a little more resilience in your community - have a conversation with your neighbours - the more people that know about it the more people who can take action.