Thousands of Yemeni civilians are trapped on the southern outskirts of Hodeidah as forces backed by a Saudi-led coalition battle Houthi insurgents entrenched in the Red Sea port city, aid groups say. 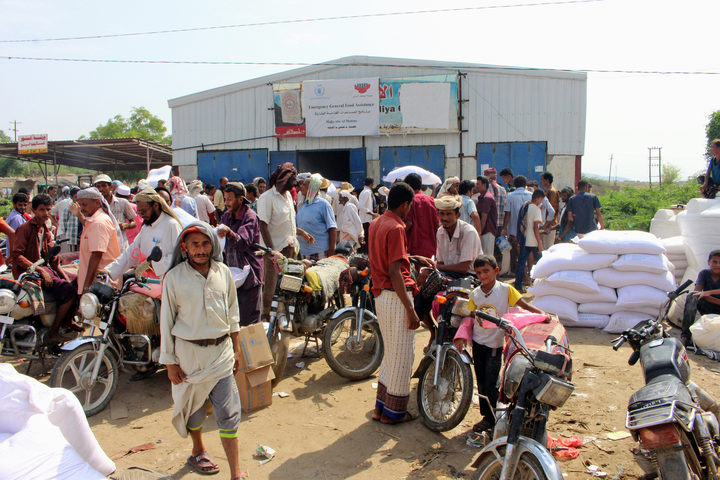 These Yemenis who have been displaced from Hodeidah receive humanitarian aid donated by the World Food Programme in the northern province of Haijah in September 2018. Photo: AFP

The alliance has massed thousands of Yemeni troops in recent days near the heavily-defended port, but a source in the coalition told Reuters there are no immediate plans for an assault on the city, a lifeline for millions of Yemenis.

The United Nations has warned that an attack on the Houthi-held city, an entry point for 80 percent of Yemen's food imports and aid relief, would risk triggering a famine in the impoverished Arab state.

The fighting has reached populated areas around a university that lies 4km from the port and has neared the city's main hospital for the first time, aid groups and residents said.

"All the people living between the airport and the university are trapped, the last four days have been very tough, it is beyond catastrophic levels," Isaac Ooko, Hodeidah's area manager for the Norwegian Refugee Council (NRC) said.

"Air strikes have been very intense and the hovering of the jets causes permanent anxiety... Hodeidah has become a ghost city, people stay indoors and the streets are deserted," he told Reuters by telephone.

A UNICEF spokeswoman, who was recently in Hodeidah, voiced concern that clashes were getting close to al-Thawra hospital, the main medical facility on Yemen's western coast which treats thousands of people, including for cholera and diphtheria.

"You could hear the fighting from the hospital and from our guest house close to it," Juliette Touma said.

The coalition says Hodeidah is key to breaking the Houthis by cutting off the main supply line of the Iran-aligned group, which controls the most populous parts of Yemen, including the capital Sanaa.

The latest clashes came as Western countries called for a ceasefire to support peace efforts to end a war that has lasted more than three years and killed more than 10,000 people.

Saudi Arabia and the United Arab Emirates have not publicly commented on those calls, but the source from the coalition said the military deployment aimed to put pressure on the Houthis to return to negotiations. United Nations-led talks in Geneva fell apart in September after the Houthis failed to show up.

"The coalition is reinforcing its position on the ground to protect troops and assets and to enlarge the security parameters," the source said.

"The coalition fully supports peace efforts, but if the Houthis do not show up, then we may run out of options."

The Sunni Muslim coalition led by Saudi Arabia and the UAE intervened in Yemen in 2015 to restore the internationally recognized government and has been under growing international scrutiny over civilian deaths in the war.

It relies heavily on Western arms and intelligence in the conflict, which is seen as a proxy war between Saudi Arabia and Iran.

Saudi Arabia is currently facing its worst political crisis in decades over the murder of prominent journalist Jamal Khashoggi in the country's consulate in Istanbul last month which has strained its relationship with key Western allies.

The United States and Britain have called for a de-escalation in Yemen and for the warring parties to engage with UN efforts to restart the peace talks.