Retail billionaire Sir Philip Green has been named in the UK parliament as the leading businessman accused by a newspaper of sexual and racial harassment. 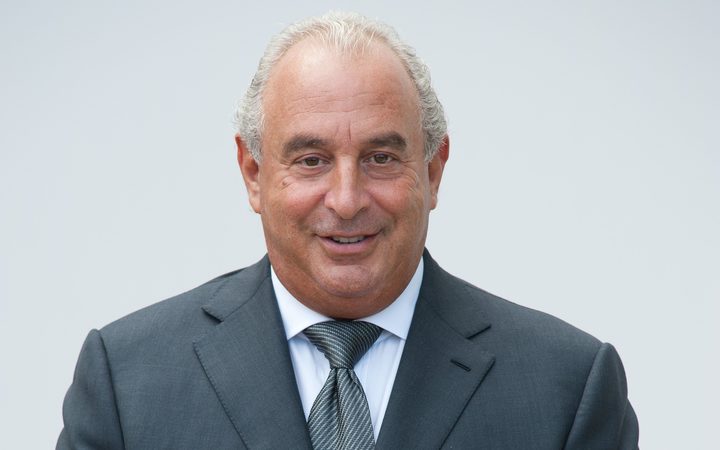 Peter Hain, who identified him in the House of Lords, said it was his duty to name him, given the "serious and repeated" nature of the allegations.

The Telegraph newspaper accused but did not name the businessman on Tuesday.

He "categorically and wholly" denied allegations of "unlawful sexual or racist behaviour".

The Court of Appeal issued an injunction preventing the newspaper from publishing Sir Philip's name. It remains in force, but Lord Hain's statement, made under parliamentary privilege, has been widely reported in the UK media.

The peer said publication of the story was "clearly in the public interest".

The Telegraph said it had spent eight months investigating allegations of bullying, intimidation and sexual harassment made against Sir Philip.

The newspaper reported that interviews with five members of staff revealed that victims had been paid "substantial sums" in return for legal commitments not to discuss their alleged experiences. The BBC said it had not been able to verify the allegations contained in The Telegraph's report.

Lord Hain said he had been contacted by someone "intimately involved in the case".

He said that given the use of non-disclosure agreements (NDAs) "to conceal the truth about serious and repeated sexual harassment, racist abuse and bullying", he felt it was his duty under parliamentary privilege to name Sir Philip as the individual in question.

Parliamentary privilege protects MPs or peers from being prosecuted over statements made in the Commons or Lords and is one of the oldest rights enshrined in British law.

Sir Philip said in a statement on Thursday night that he and his company, Arcadia, "take accusations and grievances from employees very seriously and in the event that one is raised, it is thoroughly investigated.

"Arcadia employs more than 20,000 people and in common with many large businesses sometimes receives formal complaints from employees.

"In some cases these are settled with the agreement of all parties and their legal advisers. These settlements are confidential so I cannot comment further on them."

In a statement, Sir Philip denied having broken the law and "categorically and wholly" denied allegations of unlawful sexual or racist behaviour.

Sir Philip, 66, became one of the Britain's best known retailers when he bought department store group BHS in 2000 and Topshop owner Arcadia in 2002.

The entrepreneur was once known as 'king of the high street' but his reputation was damaged by the collapse of BHS after he sold the chain for 1 pound in 2015 to a businessman who had formerly been declared bankrupt.

MPs blamed Sir Philip for the chain's demise and said it raised questions about gaps in company law and pension regulation. In a report to parliament in July 2016, they called the collapse "the unacceptable face of capitalism".

Lord Hain told the BBC's Newsnight programme he decided to name Sir Philip in the Lords because "what concerned me about this case was wealth, and power that comes with it, and abuse".

He added: "It's for others to judge whether I've been right or wrong, but you know there's no point in being in Westminster ... if you never deploy the precious rights of parliamentary privilege, to be used - as I've said - extremely carefully with integrity and very responsibly."

There had been some criticism of his decision on social media, but Lord Hain added: "I've had overwhelming support - particularly from women."