Suspected explosive devices were sent to former US President Barack Obama and ex-Secretary of State Hillary Clinton, the US Secret Service has said. 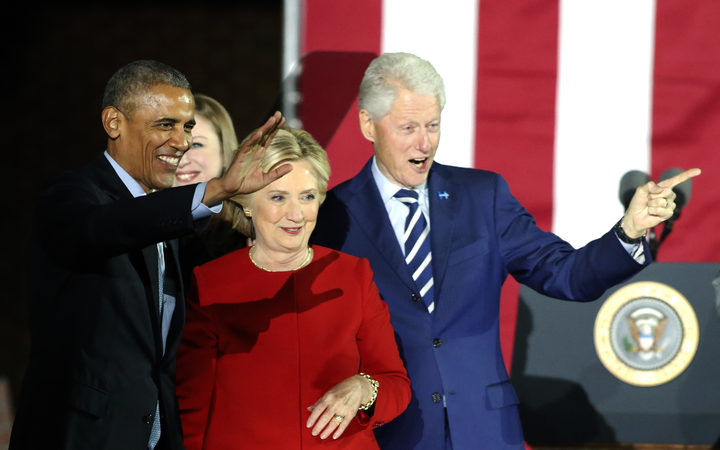 It comes two days after a bomb was found at the home of liberal philanthropist and financier George Soros in the suburbs of New York City.

A similar package sent to the former US attorney-general Eric Holder was also intercepted.

He is the first black American to have held the post.

The devices were discovered by technicians who screen mail sent to the former US officials.

The Time Warner building in New York was also evacuated due to a package.

CNN, which is located in the Time Warner building, evacuated its newsroom over the incident, CNN president Jeff Zucker confirmed in a statement.

Mr Zucker said the suspicious package was discovered in the building's mailroom, and that the office was evacuated "out of a complete abundance of caution".

According to a statement from the US Secret Service, a package addressed to Mrs Clinton was recovered late on 23 October.

"Early this morning, October 24, 2018, a second package addressed to the residence of Former President Barack Obama was intercepted by Secret Service personnel in Washington, DC," the statement adds.

"Both packages were intercepted prior to being delivered to their intended location. The protectees did not receive the packages nor were they at risk of receiving them."

A US official told the Associated Press that a "functional explosive device" was found during a screening of mail sent to the home of Mr and Mrs Clinton in Chappaqua, New York.

The FBI in New York said they were aware of the suspected packages, and that their Joint Terrorism Task force is aiding in the investigation.

A spokeswoman for Mr Obama declined to comment on the incident, and referred reporters to the Secret Service statement.

The package sent to CNN appeared to have been addressed to former CIA Director John Brennan, according to US media. 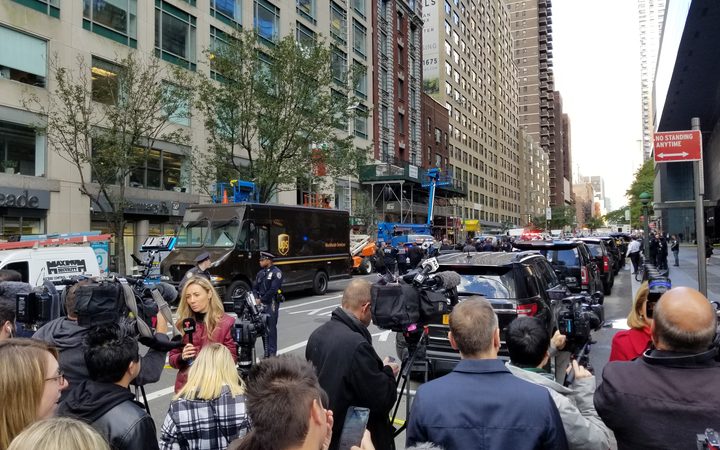 Police officers take security measures in front of the Time Warner Building where a suspected explosive device was found in the building after it was delivered to CNN's New York bureau in New York. Photo: AFP

Mr Brennan, who is a frequent contributor to the network, has become a vocal critic of Mr Trump since leaving office.

The suspected explosive devices come two days after a confirmed pipe bomb was discovered in a mailbox at the home of Mr Soros.

Mr Soros has become a frequent target for criticism by right-wing groups due to his support for liberal causes.

Officials "proactively detonated" the device, and determined that it contained explosive powder and "had the components of a bomb".

"These terrorising acts are despicable, and anyone responsible will be held accountable to the fullest extent of the law.

"The United States Secret Service and other law enforcement agencies are investigating and will take all appropriate actions to protect anyone threatened by these cowards," she said.

He added that "these cowardly actions are despicable & have no place in this Country", and that "those responsible will be brought to justice".

The US President's eldest son, Donald Trump Jr, who received a suspicious package at his New York home earlier this year, tweeted: "As someone whose family has directly been the victim of these mail threats I condemn whoever did this regardless of party or ideology.

"This crap has to stop and I hope they end up in jail for a long time."

His sister, Ivanka Trump, also condemned the "acts of violence" and expressed gratitude to law enforcement.

Chelsea Clinton, the only child of Bill and Hillary Clinton, tweeted: "Every day, I am grateful to the women and men of the United States Secret Service. Thank you."