Journalist Jamal Khashoggi died after a fight in the Saudi consulate in Istanbul, the country's state TV reported quoting an initial probe.

The news bulletin said 18 Saudi nationals have now been detained as part of the continuing probe.

This is the first time the kingdom has admitted Mr Khashoggi has died.

Saudi King Salman has also reportedly ordered the formation of a ministerial committee, headed by Crown Prince Mohammed, to restructure the intelligence services.

The journalist was last seen entering the Saudi consulate in Istanbul on 2 October, to pick up paperwork that would allow him to marry his fiancée Hatice Cengiz.

Reports on Saudi state media followed shortly after King Salman spoke on the phone to Turkey's President Recep Tayyip Erdogan about the case.

The pair exchanged information and agreed to continue cooperation into the investigation, Turkish presidential sources said.

Saudi Arabia reportedly acted on information provided by Turkish authorities as part of its inquiry, investigating a number of suspects.

Earlier police in Turkey expanded their search for Mr Khashoggi's body, with unnamed officials saying his body may have been disposed of in the nearby Belgrad forest or on farmland.

Turkey alleges he was murdered in the consulate by a Saudi hit squad.

Earlier today the BBC revealed new details about one of the men accused of murdering Jamal Khashoggi, a prominent Saudi journalist who was critical of his country's government.

Turkish media identified Maher Abdulaziz Mutreb as being part of a 15-member team of suspected Saudi agents who flew into and out of Istanbul on the day of Mr Khashoggi's disappearance from the city's Saudi consulate on 2 October.

He is said to have spent two years working in London, with a source describing him as a colonel in Saudi intelligence to US news network CNN.

BBC Arabic revealed he was trained how to use offensive spyware technology on behalf of the Saudi state.

The source, who spoke to the BBC on condition of anonymity, has visually confirmed his identity from pictures circulated in the media in the days since Mr Khashoggi's disappearance.

According to him, Mr Mutreb was introduced as "an intelligence security operative". The spyware trainers, however, nicknamed him "dark face".

"Because he looked always grumpy, like he was on the sad side… he was very silent," the source added.

Saudi Arabia denies any knowledge of what happened to Mr Khashoggi, insisting he left the consulate soon after getting routine paperwork.

The European surveillance expert described how Mr Mutreb spent two weeks on a course with him in 2011, learning how to use the technology his company was providing the Saudi government so that it could carry out targeted attacks on the phones and computers of its own citizens.

"The training involved things like infecting a computer from potential targets of interest for intelligence and extracting information, so digital evidence, information about this person of interest.

During the training, which was in a military compound in the suburbs of Riyadh, the surveillance expert says Mr Mutreb "used to come and go" and "almost didn't speak at all". 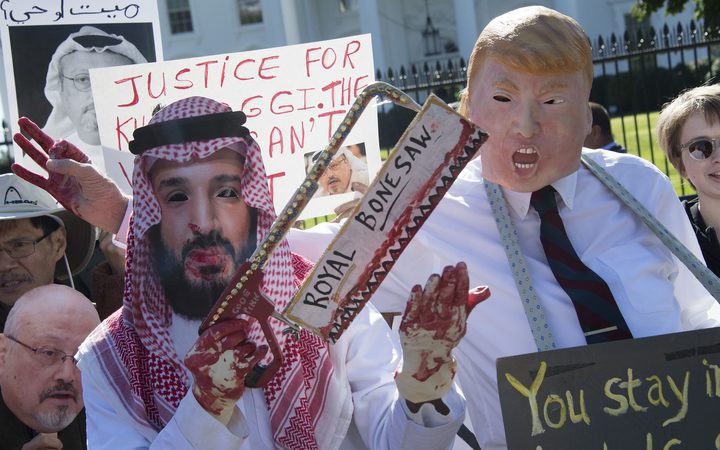 "He wasn't one of the guys who was particularly skilled on the technical side," the spyware trainer explained.

The tools he was trained in, the source said, were similar to other tools which, according to Citizenlab and Amnesty International, were recently used against several of Mr Khashoggi's friends.

Mr Mutreb is believed to have spent two years working at the Saudi embassy in London. A document published by the British government in 2007 listed a man with that name as first secretary.

However, he has also been named as a Saudi intelligence officer by several individuals, and some leaked documents.

CNN spoke to a Saudi source in London who said he knew Mr Mutreb, describing him as a colonel in Saudi intelligence, while the popular Arabic app MenoM3ay - which enables users to see the names people have linked to phone numbers - lists a man with that name as a colonel in the royal court.

On October 12 Wikileaks tweeted the Khashoggi Files, which included emails with the name of Mutreb and five other men who were supposed to have attended a course in Italy in 2011, run by an Italian company called Hacking Team.

The emails were part of a dump of 400GB of data first released by Wikileaks in July 2015, which Hacking Team say was stolen from their internal network.

The emails also included conversations that suggested the intelligence agencies Hacking Team worked with used it to spy on activists and journalists.

The Khashoggi Files: What @WikiLeaks tells us #JamalKhashoggi #Saudi https://t.co/tqOqIEx52O

The emails included a list of countries they sold their tools to, including Egypt, Russia, Saudi Arabia and Sudan. Hacking Team also sells surveillance software, some of which has offensive capabilities.