Turkey is widening its search for clues to the disappearance of Saudi journalist Jamal Khashoggi to include the Saudi consul's Istanbul residence. 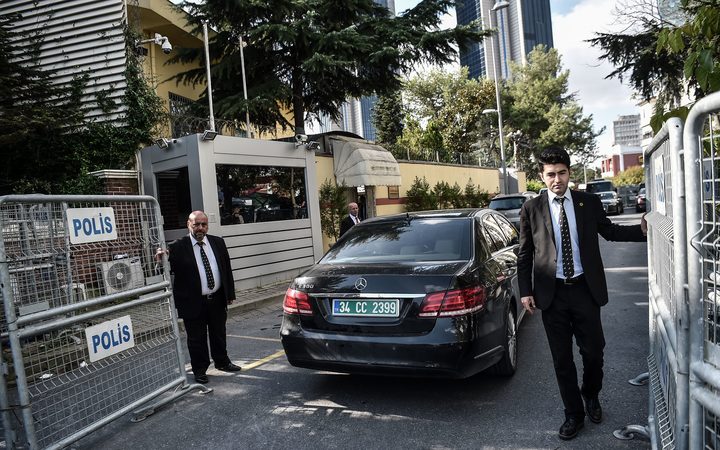 The consulate itself, where Mr Khashoggi was last seen on 2 October, was searched by Turkish investigators on Monday for the first time.

Pressure is growing on Saudi Arabia to give a full explanation of what happened to Mr Khashoggi.

Turkish officials believe Mr Khashoggi was murdered by Saudi agents but the Saudis have denied this.

Overnight, Turkish police completed a search of the consulate after being allowed in by Saudi authorities.

But, according to Turkish media, Mr al-Otaibi left Turkey on a commercial flight bound for Saudi Arabia hours before his official residence was due to be searched.

The decision to widen the search was announced to reporters by Foreign Minister Mevlut Cavusoglu, who added that he had received no "confession" from the Saudis.

Turkish sources released security video last week of cars with diplomatic plates driving between the consulate and the consul's residence on the day Mr Khashoggi was last seen.

US Secretary of State Mike Pompeo has been meeting Saudi leaders in Riyadh and is expected in Turkey later.

The crown prince also agreed on the need for an investigation that "provides answers", she said.

The secretary of state was dispatched to Riyadh on Monday after Mr Trump spoke to King Salman on the phone.

According to Mr Trump, King Salman denied "any knowledge of whatever may have happened 'to our Saudi Arabian citizen'."

The president described the denial as "very, very strong" and raised the possibility that "rogue killers" may have been involved.

"This guy's gotta go," he said on Tuesday morning, describing the heir apparent as a "wrecking ball".

The New York Times and CNN, quoting unnamed sources, reported that Saudi Arabia would acknowledge that Mr Khashoggi's death was the result of an interrogation that went wrong.

The intention had been only to abduct him from Turkey, the sources said.

This may explain in part Mr Trump's "rogue killers" line, though it would still leave questions unanswered.

CNN said the Saudis may argue the operation was conducted without clearance and those responsible would be held accountable.

The Khashoggi family in Saudi Arabia issued a statement calling for an "independent and impartial international commission".

For the first time since the journalist disappeared two weeks ago, Turkish investigators were allowed to enter the building.

The Turkish investigators, some wearing overalls, gloves and covered shoes. stayed for about nine hours, leaving in the early hours of Tuesday.

They reportedly took with them samples, including of soil from the consulate garden and a metal gate.

President Recep Tayyip Erdogan told reporters on Tuesday that the search would continue.

"My hope is that we can reach conclusions that will give us a reasonable opinion as soon as possible, because the investigation is looking into many things such as toxic materials and those materials being removed by painting them over," he said.

Mr Khashoggi, a critic of the Saudi government who has written for the Washington Post, was last seen walking into the consulate.

Reports suggest an assault and struggle took place in the consulate after Mr Khashoggi went to get paperwork for his forthcoming marriage.

Turkish sources allege he was killed by a 15-strong team of Saudi agents but Riyadh insisted earlier that he left the consulate unharmed.

Mr Khashoggi was once an adviser to the Saudi royal family but fell out of favour with the Saudi government and went into self-imposed exile. He is a US resident.