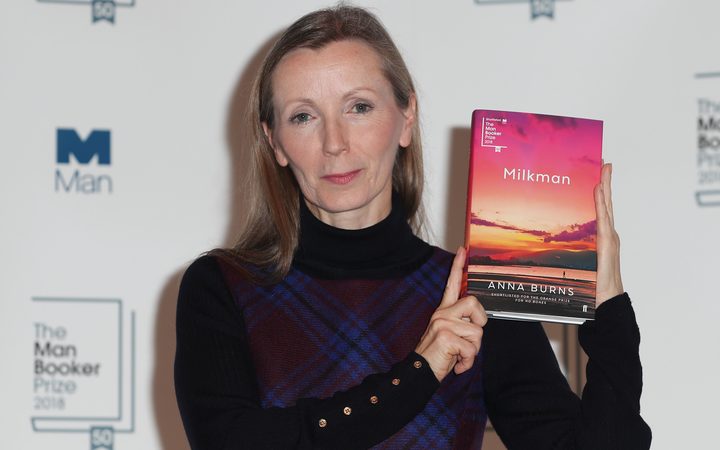 Her novel, Milkman, is a coming-of-age story about a young girl's affair with an older married man, set in a society that closely mirrors Troubles-era Belfast.

Judges for the elite literary fiction prize described it as "beginning with the distinctive and consistently realised voice of the funny, resilient, astute, plain-spoken, first-person protagonist."

Milkman is the fourth novel to be written by Ms Burns, who was born in Belfast in 1962.

Her debut, No Bones, was published in 2001, and followed by Little Constructions six years later. Her most recent work prior to Milkman was Mostly Hero - a novella published in 2014.

Chairperson of the judges, Kwame Anthony Appiah, said the texture of the language was "wonderful".

"It's written in this amazing voice of this woman who is living in a divided society," he said.

"She's being harassed by a man who is sexually interested in her, and he's taking advantage of divisions in the society to use the power he has, because of those divisions, to go after her."

"It's challenging in the way a walk up Snowdon is challenging - it's definitely worth it because the view is terrific when you get to the top."

Ms Burns opted not to give names to her characters in the novel - even her narrator refers to herself as "Middle Sister".

The Man Booker Prize shortlist of six writers was dominated by women this year, with four women making the top selection.

The list included two debut novels, one of which was Everything Under, from the youngest author ever to make the list, 27-year-old Daisy Johnson.

Set in the British countryside, Ms Johnson's novel centres on the complex relationship between Gretel and her mother, who abandoned her to foster care so she could make a fresh start with a new lover.

Our third shortlist author video is with @djdaisyjohnson who reads from her book Everything Under. #ManBooker2018 #Finest Fiction pic.twitter.com/juhqiF1t4V

Canadian writer Esi Edugyan made the shortlist for the second time with Washington Black, which explores a friendship between an 11-year-old slave and an abolitionist inventor who together try to escape from Barbados on a quest for freedom.

Our next #ManBooker2018 shortlist author video is with Esi Edugyan who tells us what her book Washington Black is about. #FinestFiction pic.twitter.com/GwdzYPNFEY

British poet Robin Robertson was shortlisted for his novel in verse, The Long Take.

Only a few hours to go before we announce this year's winner. Here is our last #ManBooker2018 shortlist author video with Robin Robertson. pic.twitter.com/S9a3DMhRgp

Rachel Kushner (USA) was selected for The Mars Room, in which convict Romy Hall begins two consecutive life sentences at Stanville Woman's Correctional Facility and is confronted with a new reality of institutional living from her previously chaotic life in the outside world.

The next shortlist author video is with Rachel Kushner who tells us about her book The Mars Room #ManBooker2018 #Finest Fiction pic.twitter.com/9uYwd4FPQv

Another finalist was Richard Powers (USA) for The Overstory, about nine strangers summoned by trees to try to save the continent's few remaining acres of forest.

Richard Powers reads from his book The Overstory in this next #ManBooker2018 author shortlist video pic.twitter.com/NdIau7CYol

Mr Appiah said each of the finalists' novels was a "miracle of stylistic invention in which the language takes centre stage".

"Each one explores the anatomy of pain - among the incarcerated and on a slave plantation, in a society fractured by sectarian violence, and even in the natural world," he said.

"But there are also in each of them moments of hope.

"These books speak very much to our moment, but we believe that they will endure."

Mr Appiah said many of the 171 books that had been submitted for the prize were overlong and badly in need of a vigorous pruning.

The Man Booker Prize is awarded annually to writers of any nationality writing in English and published in the United Kingdom and Ireland.