Final preparations are being made in Windsor for Britain's second major royal wedding this year, this time involving Queen Elizabeth's granddaughter Princess Eugenie. 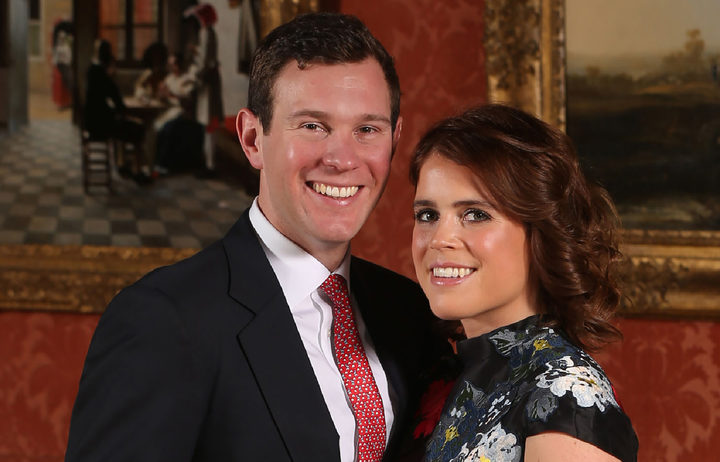 Britain's Princess Eugenie of York poses with her fiance Jack Brooksbank at Buckingham Palace after the announcement of their engagement. Photo: AFP

Princess Eugenie, younger daughter of Prince Andrew and his ex-wife Sarah Ferguson, the Duchess of York, will tie the knot with Jack Brooksbank, at the monarch's Windsor Castle home tonight (NZT).

The nuptials come just five months after the glittering wedding of Prince Harry and Duchess of Sussex, Meghan, at the same location.

Princess Eugenie, 28, ninth-in-line to the throne and a director at London's Hauser & Wirth art gallery, and Mr Brooksbank, 32, who works in the drinks and hospitality industry, are copying some of her cousin's plans.

The couple, who met in the Swiss ski resort of Verbier in 2010 and got engaged in Nicaragua in January, have likewise invited 1200 people from across Britain to watch the newlyweds leave St George's Chapel after the service.

They will then take an open-top carriage ride through Windsor, although it will be shorter than the one the Duke and Duchess of Sussex took in May when thousands thronged the streets.

"We're hoping she's going to have a great day and we're very pleased that she's shared her day with us."

Stars from showbusiness and sport attended Prince Harry's wedding, and Buckingham Palace announced that one of Princess Eugenie's bridesmaids will be Theodora Williams, the six-year-old daughter of ex "Take That" singer Robbie Williams and his wife Ayda Field.

Three-year-old Princess Charlotte will also be a bridesmaid while her brother Prince George, 5, will be a page boy. Princess Eugenie's older sister Beatrice, 30, will be her maid of honour.

Nearly all Britain's senior royals are expected to attend although Prince Charles's wife Camilla will be absent as she has a prior engagement in Scotland. It was not certain whether the 92-year-old queen's husband Prince Philip, 97, who no longer carries out official duties, would be present.

The Dean of Windsor will officiate the ceremony while Italian tenor Andrea Bocelli will perform during the service. Also among the guests will be the surgeon who carried out an operation to straighten Princess Eugenie's back when she was 12, British media reported.

"I'm not stressed at all," Princess Eugenie told Vogue magazine for its September issue. "It's very nerve-wracking because you want it to be perfect but then you realise that you're going to be with the person you love forever and nothing else really matters."

While the royal family is paying for the wedding itself, there has been disquiet among republicans and some newspapers over the security bill for the event, which has been estimated at more than 2 million pounds ($NZ4m), given that Princess Eugenie does not carry out official royal duties.

About 38,000 people signed a petition, organised by campaign group Republic, against taxpayers' money being spent on the occasion.

"Most Brits opposed taxpayer funding of Prince Harry's wedding but as with all royal events were forced to accept it," a spokesman for the group said. "But there's something different about Friday's royal wedding, and people aren't happy."

Britain's top-selling Sun newspaper ran a front page story earlier this week with the headline "£2m too much for Eugenie wedding", saying the event could have been held at a chapel near her childhood home.