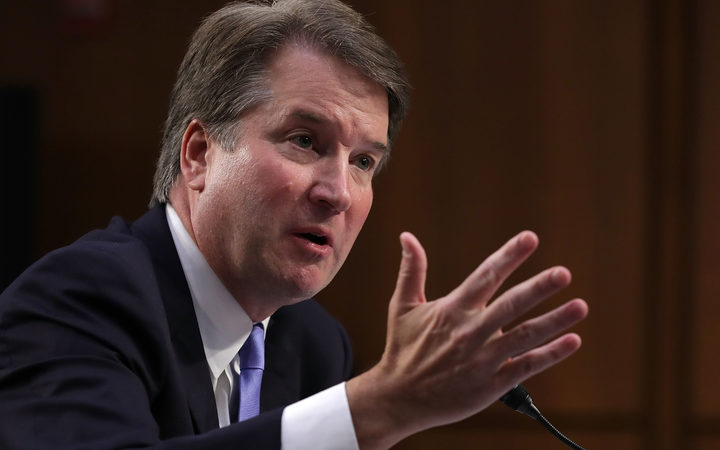 One copy of the report exists for all 100 senators to read. Democrats said it was incomplete and Republicans retorted it did not support the accusations.

Judge Kavanaugh has vehemently denied all allegations against him.

A confirmation vote is expected on Saturday. His appointment would tilt the court in favour of conservatives.

The court's nine justices are appointed for life and have the final say on some of the most contentious issues in US public life, from abortion to gun control and voting laws.

The FBI's investigation will not be made public.

Republicans have accused Democrats of seeking to delay the confirmation of Mr Kavanaugh in the hope that they will make gains in the mid-term elections in November and stop his appointment altogether.

What are the allegations?

Last week Professor Christine Blasey Ford testified to the Senate Judiciary Committee that Mr Kavanaugh, 53, and another man had assaulted her when they were teenagers in the 1980s.

She said Mr Kavanaugh was drunk and had pinned her on to a bed, tried to remove her clothing and put his hand over her mouth when she screamed.

Another woman, Deborah Ramirez, has accused Mr Kavanaugh of exposing himself to her during a drinking game when they were students at Yale University in the 1980s.

After Prof Ford's testimony, the Senate panel approved Judge Kavanaugh's nomination but asked for the FBI to conduct further inquiry before the full Senate voted on his appointment to America's top court.

However the FBI did not examine allegations made by a third woman, Julie Swetnick, that Mr Kavanaugh was involved in the drugging and sexual assault of girls at house parties in the 1980s. He has described Ms Swetnick's allegation as a "joke". 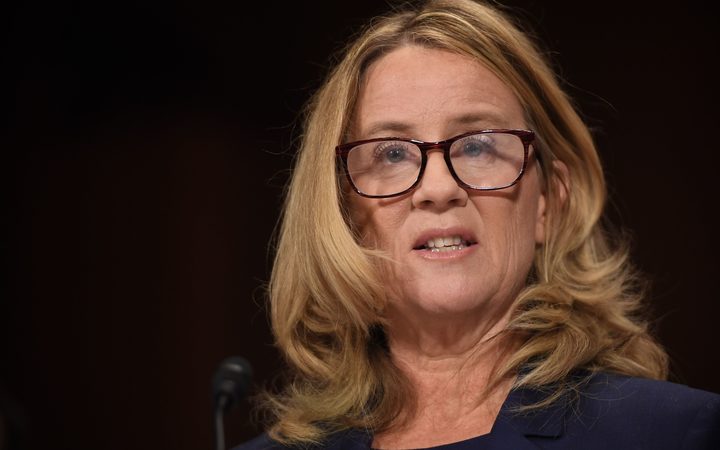 What's in the report?

The report contains summaries of interviews that the FBI has conducted and which the White House has forwarded to the Senate. It is not meant to have the form of a conclusion or recommendation.

Senators have been told not to reveal what the report says, but it remains to be seen whether that secrecy will hold.

The report is in paper format only and no copies will be made. It will be held in a secure room in the basement of the Capitol building, known as a Sensitive Compartmented Information Facility, or "Skif", AP news agency reported.

Committee chairman Chuck Grassley reviewed the report at 08:00 local time (12:00 GMT) and ranking Democrat Dianne Feinstein saw it at 09:00. After that, the Republican committee members see it at 10:00 and the Democrats at 11:00.

Investigators spoke to Ms Ramirez for more than two hours on Sunday, and she provided a list of more than 20 possible witnesses. However, her lawyer has complained that the FBI has not contacted any of them.

Lawyers for his first accuser, Prof Ford, also said that she had not been contacted by the agency.

Democrats have raised concerns that the investigation has been too narrow in scope, and that key witnesses have been omitted.

In a statement after reading the report Chairman Grassley said: "There's nothing in it that we didn't already know".

"Neither the Judiciary Committee nor the FBI could locate any third parties who can attest to any of the allegations," he said, adding that the investigation "found no hint of misconduct".

Ranking Democratic Senator Dianne Feinstein called it an "incomplete investigation," adding that "the most notable part of this report is what's not in it". 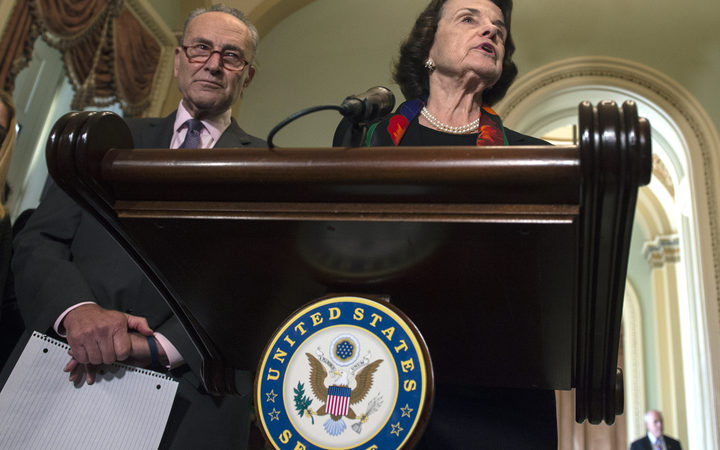 What have senators said?

In a statement after reading the report, chairman of the Senate Judiciary Committee Charles Grassley said: "There's nothing in it that we didn't already know", and that the FBI "found no hint of misconduct".

Ranking Democratic Senator Dianne Feinstein called it an "incomplete investigation," adding that "the most notable part of this report is what's not in it".

Moderate Republican Susan Collins of Maine, who also has not announced how she will vote, said it "appears very thorough".

Why didn't the FBI speak to Ford or Kavanaugh?

The remit of the FBI investigation came from the White House and some US media reports have said it decided not to ask the FBI to interview Prof Ford or Judge Kavanaugh.

The White House Counsel's office believes that the sworn testimony from both in front of the Senate committee last week is sufficient, CNN reported.

President Trump declared this week that he wanted the most "comprehensive" inquiry, although he favoured it being completed with no delays.

Will Kavanaugh be confirmed?

The party has only a 51-49 Senate majority. That means that if all Democrats vote against confirming Judge Kavanaugh, Republicans can only afford one defection - since in a tie, Vice-President Mike Pence would get the casting vote.

Three Republican senators - Jeff Flake, Susan Collins and Lisa Murkowski - are being closely watched, as they have not yet said how they will vote.

The three senators criticised Mr Trump after he mocked Prof Ford at a rally on Tuesday for not recalling some details of the alleged assault. They described the president's remarks as "appalling", "inappropriate" and "just plain wrong".

Two Democrats, Joe Manchin of West Virginia, and Heidi Heitkamp of North Dakota, are also yet to declare their intentions.

President Trump tweeted on Thursday that "mean and despicable democrats" had treated Mr Kavanaugh harshly and unfairly and that was having an effect on the voters.

The harsh and unfair treatment of Judge Brett Kavanaugh is having an incredible upward impact on voters. The PEOPLE get it far better than the politicians. Most importantly, this great life cannot be ruined by mean & despicable Democrats and totally uncorroborated allegations!

And the White House has expressed confidence that the FBI interviews will not lead to blocking the confirmation of Judge Kavanaugh.

In contrast to the president's enthusiasm, a coalition of US Christian churches with 40 million worshippers has urged Mr Kavanaugh to withdraw his nomination.

The National Council of Churches said in a statement that he had shown "extreme partisan bias" during his testimony to the Senate Judiciary Committee, and lacked the temperament to be a Supreme Court judge.

More than 1000 law professors have also signed a letter urging senators not to confirm Mr Kavanaugh.

"We have differing views about the other qualifications of Judge Kavanaugh. But we are united... in believing that [during the Senate hearing] he did not display the impartiality and judicial temperament requisite to sit on the highest court of our land," the letter said.