US President Donald Trump has attacked the Iranian leadership, accusing it of sowing "chaos, death and destruction" across the Middle East. 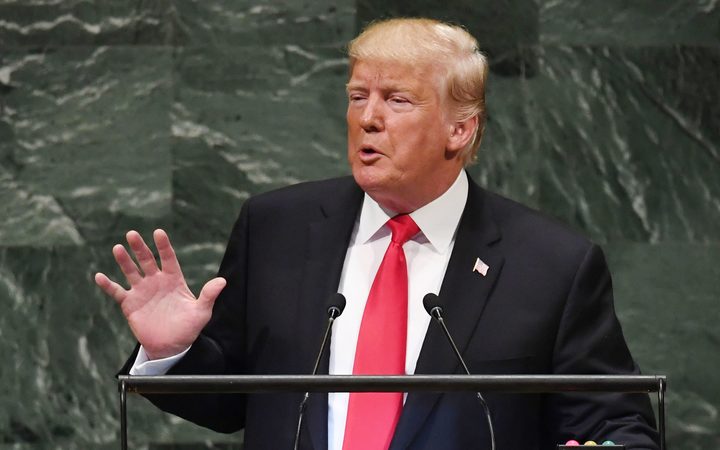 Donald Trump was greeted with laughter when he said his administration had accomplished "more than almost any" other in US history. Photo: AFP

Addressing the United Nations General Assembly in New York, he defended his decision to abandon the nuclear deal.

Mr Trump also boasted that his administration had accomplished "more than almost any" other in US history.

His words were greeted with laughter but he laughed back, saying: "Didn't expect that reaction."

One of his key themes, however, was the right of America to pursue its own path in the world.

"I honour the right of every nation in this room to pursue its own customs, beliefs and traditions," he said.

"The United States will not tell you how to live or work or worship. We only ask that you honour our sovereignty in return."

"They do not respect their neighbours or borders or the sovereign rights of nations. Instead, Iran's leaders plunder the nation's resources to enrich themselves and spread mayhem across the Middle East and far beyond."

In August, the US reinstated sanctions targeting the Iranian government's purchase of US dollars, Iran's trade in gold and other precious metals, and its automotive sector.

In November, a second batch of potentially more damaging sanctions will be reimposed on Iran's oil and shipping sectors as well as its central bank.

Iran has accused Mr Trump of waging "psychological warfare" against it. and denies any involvement in terrorism. It insists its nuclear programme is entirely peaceful.

Remaining members in the nuclear deal - the UK, China, France, Germany and Russia - say they will set up a new payment system to maintain business with Iran and bypass US sanctions.

The system would facilitate oil companies and businesses to continue trading without relying on the US-led global market and dollar, but exactly how the system would work is still being determined.

The US leader said his meeting with North Korean leader Kim Jong-un in Singapore in June had led to developments unimaginable only a few months ago.

"With support from many countries here today we have engaged with North Korea to replace the spectre of conflict with a bold and new push for peace," he said.

"I would like to thank Chairman Kim for his courage and for the steps he has taken, though much work remains to be done."

Sanctions, he said, would stay in place until North Korea's "denuclearisation occurs".