The US ambassador to the UN has urged Iran to "look in the mirror" for the causes of an attack on a military parade that killed 25 on Saturday. 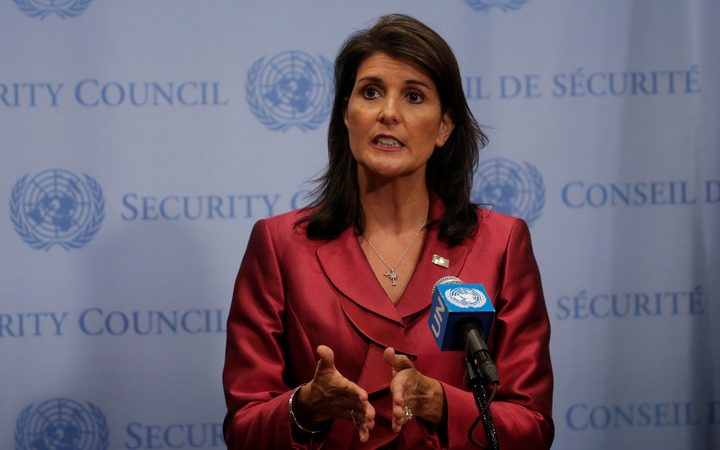 She was responding to Mr Rouhani's fierce criticism of the US, in which he blamed it for enabling the attack.

Two separate groups have claimed they carried out the shooting, but neither has provided evidence.

Four gunmen opened fire at Revolutionary Guard troops in the south-western city of Ahvaz on Saturday, killing 25 people including soldiers and civilians watching a commemorative parade.

One of the victims was a four-year-old girl.

An anti-government Arab group - Ahvaz National Resistance - and the Islamic State (IS) group both claimed responsibility for the killings.

And Mr Rouhani said the "bully" US, along with Gulf states it backed, had enabled the attack.

But the US has denied responsibility and says it condemns "any terrorist attack", while a senior official for the United Arab Emirates - one of the countries Mr Rouhani was thought to be referring to - called the accusations "baseless".

"He's got the Iranian people ... protesting, every ounce of money that goes into Iran goes into his military, he has oppressed his people for a long time and he needs to look at his own base to figure out where that's coming from," Ms Haley told CNN.

"He can blame us all he wants. The thing he's got to do is look in the mirror." 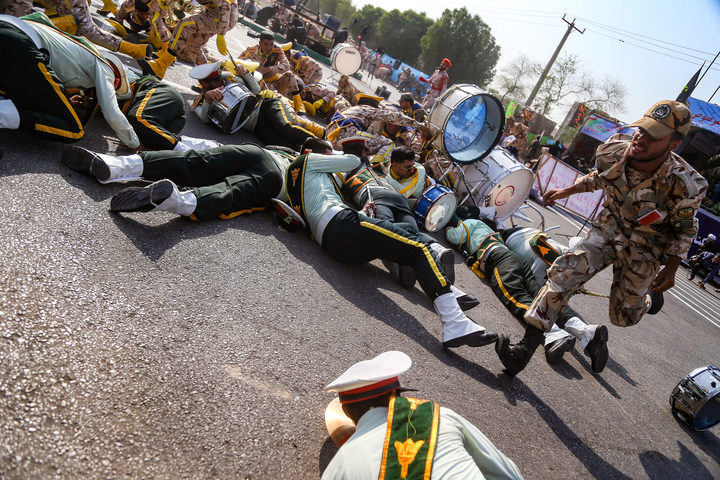 A soldier runs past injured comrades at the scene of an attack on a military parade marking the anniversary of the outbreak its 1980-1988 war with Iraq. Photo: MORTEZA JABERIAN / ISNA / AFP

Mr Rouhani will face Donald Trump at the UN General Assembly this week.

Speaking on Sunday, before leaving for the UN in New York, Mr Rouhani vowed that Iran would "not let this crime stand".

"It is absolutely clear to us who committed this crime ... and whom they are linked to," he said.

He alleged that a Gulf country had supported the "financial, weaponry and political needs" of the attackers.

He added: "The small puppet countries in the region are backed by America, and the US is provoking them and giving them the necessary capabilities."

Mr Rouhani did not specify which "puppet" countries he was referring to - but his comments are widely thought to be directed at Iran's regional foe Saudi Arabia, and the UAE and Bahrain.

Both countries have been struggling for regional political and religious dominance for decades, and are engaged in a number of proxy wars around the region, backing rival factions in Yemen and Syria.

The UAE and Bahrain are closely allied with Saudi Arabia.

Iran has also alleged that the gunmen had links to its bitter foe Israel.

The US has accused Iran of running a clandestine nuclear weapons programme, which Iran denies.

US-Iran relations deteriorated after Mr Trump took office and then withdrew from a 2015 nuclear deal under which Iran limited its nuclear activities in exchange for sanctions relief.

Since then, the US has brought sanctions back into place, despite opposition from EU partners, China and Russia, and warned that anyone trading with Iran would also be punished.

The US has also expressed support for anti-government protesters in Iran.