Iranian leaders have accused US-backed Gulf states of being behind an attack on a military parade that killed 25 people, including a child. 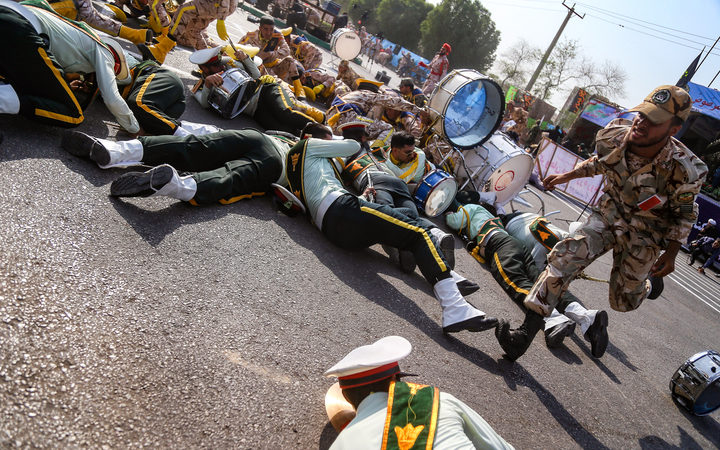 A soldier running past injured comrades lying on the ground at the scene of an attack on a military parade that was marking the anniversary of the outbreak of its devastating 1980-1988 war with Saddam Hussein's Iraq. Photo: MORTEZA JABERIAN / ISNA / AFP

Supreme Leader Ayatollah Ali Khamenei said "puppets of the US" were trying to "create insecurity" in Iran.

Gunmen opened fire at Revolutionary Guard troops and officials in the south-western city of Ahvaz.

Earlier an anti-government Arab group, Ahvaz National Resistance, and Islamic State (IS) both claimed the attack.

However, neither group provided evidence to show they were involved.

Terrorists recruited, trained, armed & paid by a foreign regime have attacked Ahvaz. Children and journos among casualties. Iran holds regional terror sponsors and their US masters accountable for such attacks. Iran will respond swiftly and decisively in defense of Iranian lives. pic.twitter.com/WG1J1wgVD9

Reports say nearly half of those killed were members of the Revolutionary Guard, who are under Mr Khamenei's command.

Mr Khamenei did not name the "regional states" that he believed were behind the attack.

The attackers fired at civilians and attempted to attack military officials on the podium, Fars reported.

Civilians including women and children, who were watching the military parade, were among those killed, Irna news agency said.

The victims included a four-year-old girl and a military veteran in a wheelchair, a military spokesman said.

Local journalist Behrad Ghasemi told AFP that firing continued for between 10 and 15 minutes and said at least one of the attackers was wearing a Revolutionary Guards uniform.

"First we thought it's part of the parade, but after about 10 seconds we realised it was a terrorist attack as bodyguards [of officials] started shooting," he said.

"Everything went haywire and soldiers started running. I saw a four-year old child get shot, and also a lady," he said.

Iran is marking the anniversary of the beginning of the 1980-88 war with Iraq with several military parades across the nation.

There have been conflicting claims as to who was behind the attack.

A spokesman for the Ahvaz National Resistance, an umbrella group that claims to defend the rights of the Arab minority in Khuzestan, said the group was behind the attack.

The spokesman did not say whether the group had links to other countries.

IS's Amaq agency has also claimed it carried out the attack. However, the group provided no evidence that it had been involved.

IS has carried out a major attack in Iran before. In June last year, suicide bombers attacked parliament and the mausoleum of the Islamic Republic's founder Ayatollah Khomeini, killing 18 people.

Iranian government and military officials have pointed the finger at Gulf states, the US and Israel, with all of whom Iran has longstanding tensions.

A Revolutionary Guards spokesman claimed the attackers were "trained and organised by two Gulf countries" and had ties to the US and Israel.

The US and Saudi Arabia accuse Iran of supporting Houthi rebels in the conflict in Yemen, where Saudi Arabia and the United Arab Emirates are fighting on the side of the internationally-recognised government of President Abdrabbuh Mansour Hadi.