Prime Minister Jacinda Ardern briefly met with the US President at his reception for world leaders attending the United Nations. 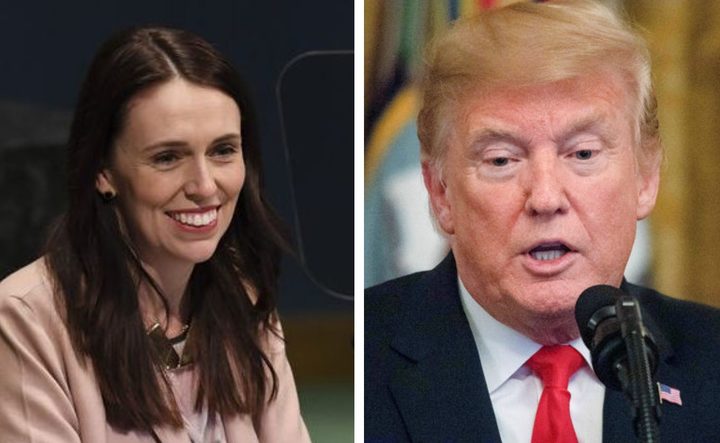 Before they posed for a photo together, Ms Ardern had a brief conservation with Mr Trump.

He congratulated her on the birth of her daughter Neve, and she acknowledged the work the president was doing on the Korean Peninsula.

The prime minister also used the opportunity to promote the work of New Zealand and US officials on the lifting of steel and aluminium tariffs.

Ms Ardern and Donald Trump were in the UN General Assembly as the general debate got underway though their paths did not cross.

Earlier this week Ms Ardern said New Zealand would not be signing up to a US call for global action on the war on drugs, and preferred to take a health approach.

Ms Ardern remained expressionless during Donald Trump's half hour speech this morning in which he lashed out at Iran.

He told world leaders that the regime in Iran was corrupt and its leaders sowed chaos, death and destruction.

"They do not respect their neighbours or borders, or the sovereign rights of nations, instead Iran's leaders plunder the nation's resources to enrich themselves, and to spread mayhem across the Middle East and far beyond."

Donald Trump said the US planned to impose further sanctions on Iran and called on all nations that import Iranian crude oil to cut their purchases substantially.

He also said the US would provide no support or recognition to the International Criminal Court.

"As far as America is concerned the ICC has no jurisdiction, no legitimacy and no authority."

Mr Trump also said his country would reconsider all of its foreign aid.

"The United States is the greatest giver in the world, by far, of foreign aid, but few if anything give anything to us, that is why we are taking a hard look at US foreign assistance.

"Moving forward we are only going to give foreign aid to those who respect us and frankly are our friends."

Ms Ardern said later Mr Trump had made similar remarks before and she was not surprised by his comments to the UN.

"He obviously takes a very particular view around issues of sovereignty, multilateralism and of course Iran, I don't think that would have surprised anyone today.

"From New Zealand's perspective, we were at the table the moment that the UN was formed alongside roughly 50 other countries. Multilateralism has always been one of our values and we'll maintain that."

There was laughter from the floor when Mr Trump boasted that his administration had accomplished "more than almost any" other in US history.

Ms Ardern would not comment on whether she thought world leaders were laughing at Mr Trump or with him.

She said she did not laugh as she was listening to what he was saying.

Ms Ardern was asked whether she was concerned about New Zealand businesses who were trading with Iran and whether she could give them an assurance that their trade would be safe.

"I can give businesses who are trading in Iran the assurance that we are doing everything that we can to support the work that they do.

"It is a big focus for us to protect New Zealand's interests and we do that by supporting the rulebook, by operating under the predictable international order that New Zealand's always supported."

Ms Ardern also said her partner Clarke Gayford knocked over a flag when they met the Mr Trump and his wife Melania at the reception.

Ms Ardern told reporters that at the reception there was an expectation to have a photograph taken on the way in to the event.

It's understood Melania Trump told Clarke Gayford not to worry about the flag, saying it was okay.

Ms Ardern will give her address to the United Nations on Friday morning New Zealand time.