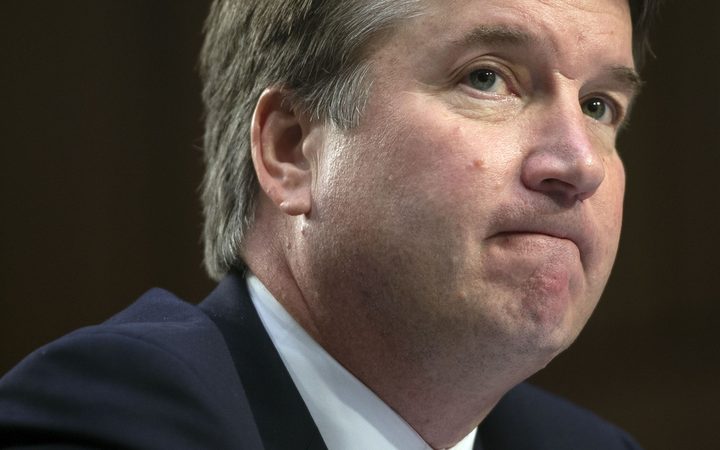 Deborah Ramirez, a Yale university classmate of the judge, detailed the alleged incident to the New Yorker.

She alleges Mr Kavanaugh exposed his genitals at a dormitory party and thrust them in her face, causing physical contact without consent.

The judge has denied both allegations, labelling the latest "a smear".

Professor Christine Blasey Ford, who last week came forward as the woman alleging Mr Kavanaugh sexually assaulted her in 1982, has agreed to testify about the allegation at a Senate committee hearing on Thursday.

The choice of a new justice for the Supreme Court is pivotal, as it often gives the final word on highly contentious laws, with an immense impact on US public life.

Ms Ramirez alleges the incident occurred when she was a freshman at Yale University alongside Mr Kavanaugh during the 1983-4 academic year.

She said they were both taking part in a drinking game at a dormitory party where people sat in a circle and selected others to drink.

She said at one point, a plastic penis was pointed in her direction by one man, and later another exposed himself directly.

"I remember a penis being in front of my face," she said. "I knew that's not what I wanted, even in that state of mind."

Ms Ramirez said she was mocked and taunted when she remarked it wasn't real, and then ended up touching the genitals while attempting to push the man away.

"I wasn't going to touch a penis until I was married," she said, referring to her devout Catholic upbringing. "I was embarrassed and ashamed and humiliated."

She said she remembers Mr Kavanaugh standing to her right and laughing, pulling up his pants.

The article says the 53-year-old acknowledges gaps in her memory caused by alcohol that night, which is said to have made her hesitant to come forward when contacted.

The journalists behind the piece, Ronan Farrow and Jane Mayer, say they contacted dozens of classmates to try and corroborate Ms Ramirez's account.

Three former students, who were not independent eyewitnesses, recalled being told or discussing the incident in vague terms at the time.

Two males allegedly involved in the incident disputed her account alongside several other classmates, adding the allegation against Mr Kavanaugh was "completely out of character".

In a statement, the Supreme Court nominee strongly refuted the allegation.

"This alleged event from 35 years ago did not happen. The people who knew me then know that this did not happen, and have said so," he said.

"This is a smear, plain and simple. I look forward to testifying on Thursday about the truth, and defending my good name - and the reputation for character and integrity I have spent a lifetime building - against these last-minute allegations."

A White House spokeswoman says the administration stands by the nominee, labelling the allegation "the latest in coordinated smear campaign by the Democrats designed to tear a good man down".

Before President Trump's nominee can be approved for the vacant seat on the US top court, he has to be approved by the 20-person Senate Judiciary Committee and then the whole Senate.

Professor Christine Blasey Ford, who came forward last week, has agreed to be questioned publicly at a committee hearing on Thursday.

She alleges Mr Kavanaugh tried to drunkenly remove her clothing, pinned her to a bed and covered her mouth at a high-school party in 1982 when she was 15 and he was 17.

Some Republicans, including President Trump, have accused her and Democratic politicians of deliberately trying to delay and obstruct the judge's confirmation using the allegations.

Both Prof Ford and Mr Kavanaugh and his wife have reportedly received violent threats since the allegations came to light.

Michael Avenetti, a US lawyer known for representing adult film actress Stormy Daniels in her cases against President Trump, has alleged on Twitter that he is representing a third woman with "credible information" regarding Judge Kavanaugh and the alleged witness to Prof Ford's assault, Mark Judge.