US President Donald Trump has nominated Brett Kavanaugh for the Supreme Court, setting the stage for a bruising confirmation battle. 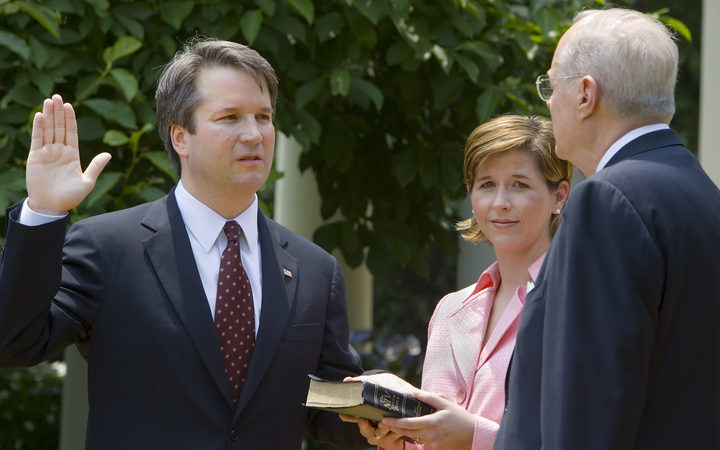 Brett Kavanaugh (left) pictured in 2006 being sworn in as a US Court of Appeals Judge for the District of Columbia. Photo: AFP

In a primetime announcement at the White House, Mr Trump praised his pick as a "brilliant jurist".

The nominee, a District of Columbia appeals court judge, is a former adviser to ex-President George W Bush.

The decision has far-reaching implications for America on everything from abortion to guns to immigration.

Mr Trump said: "Judge Kavanaugh has impeccable credentials, unsurpassed qualifications and a proven commitment to equal justice under the law."

He added: "He is a brilliant jurist with a clear and effective writing style, universally regarded as one of the finest and sharpest legal minds of our time."

This is the president's second appointment to the highest court in the land, potentially allowing him to shape the US for a generation after he leaves the White House.

With reality television-style suspense, he had kept everyone guessing up until the last moment.

The appointee would replace Justice Anthony Kennedy, 81, who announced last month that he will retire this summer.

At the announcement, Judge Kavanaugh said: "Mr President, thank you. Throughout this process I have witnessed firsthand your appreciation for the vital role of the American judiciary.

"No president has ever consulted more widely, or talked with more people from more backgrounds to seek input abut a Supreme Court nomination.

"I am grateful to you and I am humbled by your confidence in me."

Who is Judge Kavanaugh?

He has served since 2006 on the influential US Court of Appeals for the District of Columbia Circuit and was formerly a White House aide under George W Bush.

He previously worked for Kenneth Starr, the independent counsel who investigated Democratic former President Bill Clinton in the 1990s.

A Yale graduate, he once clerked for Justice Kennedy, the man he would replace.

Judge Kavanaugh recently voiced disagreement with a court decision allowing an undocumented teenage immigrant to have an abortion.

He wrote a Minnesota law review article in 2009 arguing that presidents should be shielded from criminal investigations and civil lawsuits while in office.

Analysts say that could have weighed in his favour with the White House, given that the Supreme Court may at some point be asked to rule on matters arising from Special Counsel Robert Mueller's ongoing Russia-related investigation.

The highest court in the US is the ultimate arbiter on highly contentious laws, disputes between states and the federal government.

It rules on such issues as abortion, the death penalty, voter rights, immigration policy, campaign finance and racial bias in policing.

Each of the nine justices serves a lifetime appointment. Judge Kavanaugh is 53, meaning he could serve for decades to come.

His appointment will not change the ideological tilt of a court that already has a 5-4 conservative majority, but the new justice could nevertheless shift the bench further right.

Justice Kennedy sometimes sided with the court's liberal justices on divisive social issues. But Judge Kavanaugh may not provide such a swing vote.

Justice Neil Gorsuch, 50, who was appointed by Mr Trump last year, is already one of the most conservative members of the nine-member court.

The nominee must be confirmed by the US Senate, which the Republican president's party narrowly controls 51-49.

A nominee needs a simple majority of 51 votes to be confirmed.

With Senator John McCain battling cancer in his home state of Arizona, Republicans can currently only muster 50 votes.

Before a full vote on the chamber floor, the prospective justice will be grilled by the Senate Judiciary Committee in hearings that can go on for days.

Judge Kavanaugh said he would begin meetings with senators on Tuesday.

Conservative Christians have long vied to overturn that decision, and Mr Trump has previously said he wants "pro-life" justices opposed to abortion rights.

The White House and Republican party want the nomination in the bag before November's mid-term elections.