President Donald Trump has challenged the woman who has accused his Supreme Court nominee of sexual assault, demanding she provide evidence. 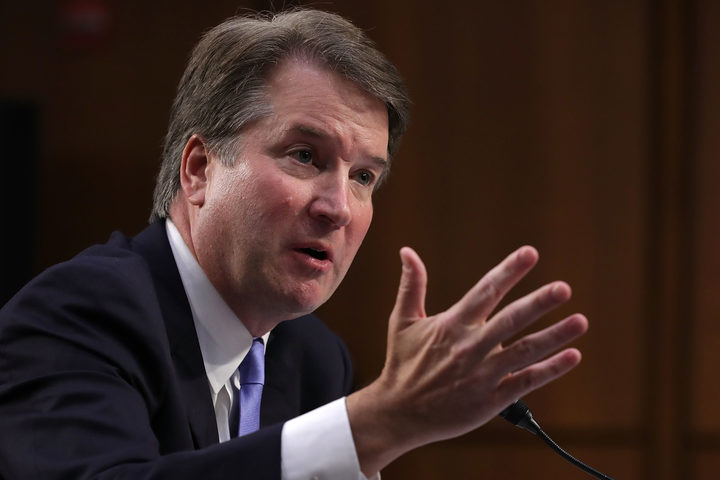 Mr Trump questioned why law enforcement was not called at the time of the alleged assault, in 1982, if it was "as bad as she says".

The nomination of Brett Kavanaugh has been held up while the allegations of Christine Blasey Ford are assessed.

Both have agreed to testify before a Senate committee.

However, Prof Ford has set out conditions for her appearance which have yet to be agreed by the Senate Judiciary Committee.

US media report that the panel has now offered to hold the hearing next Wednesday.

This counteroffer reportedly requires Prof Ford to testify before Judge Kavanaugh, which goes against one of her conditions.

The committee must approve the nomination before it passes to the full Senate for a vote.

The choice of a new justice for the Supreme Court is pivotal, as it often gives the final word on highly contentious laws and its nine judges have an immense impact on US public life.

In a series of tweets, the president again delivered his full support for Judge Kavanaugh, saying he was a "fine man, with an impeccable reputation".

He went on: "I have no doubt that, if the attack on Dr Ford was as bad as she says, charges would have been immediately filed with local Law Enforcement Authorities by either her or her loving parents. I ask that she bring those filings forward so that we can learn date, time, and place!"

He added: "Why didn't someone call the FBI 36 years ago?"

The radical left lawyers want the FBI to get involved NOW. Why didn’t someone call the FBI 36 years ago?

By Friday afternoon, the hashtag had over 122,000 tweets from both women and men.

President Trump had also weighed in on the process on Thursday, telling Fox News: "I don't think you can delay it any longer. They've delayed it a week already... they have to get on with it."

The Senate Judiciary Committee vote on Judge Kavanaugh had originally been scheduled for Thursday of this week.

The details of the alleged assault during a gathering of teenagers at a house in Montgomery County, Maryland, were carried in the Washington Post last Sunday when Prof Ford decided to go public.

She told the newspaper that she discussed the alleged assault in 2012 when she attended couples therapy with her husband.

The psychology professor at Palo Alto University in California said she was being treated for what she said had been the long-term effects of the incident.

She told a senior Democratic lawmaker of her allegation in a confidential letter this summer and only consented to be named after it was leaked.

What does the committee say?

Committee chairman Chuck Grassley had called for written testimony by this Friday from Prof Ford and scheduled a hearing on the matter for Monday.

Her lawyer, Debra Katz, rejected this and in a phone call to the panel on Thursday spelled out her client's conditions for testifying.

Will the conditions be accepted?

There are problems with at least three of the requests.

The Senate Judiciary Committee would have to change the Monday hearing.

It is also not traditional for the accused to testify first and not have an opportunity for rebuttal.

Neither is it traditional for any subpoenas to be issued for the nomination process.

However, Ms Katz suggested there appeared to be room for negotiation when she sent a letter to the committee after the phone call, saying: "The only issue I said was a deal breaker was that Dr Ford cannot appear at a hearing on Monday."

Threats - and support - for all sides

Prof Ford, Judge Kavanaugh and his wife have all been receiving threats, as the case becomes increasingly contentious.

Ms Katz said of her client: "She's been receiving death threats which have been reported to the FBI and she and her family have been forced out of their home."

Fox News said it had obtained emails showing graphic and violent threats to Ashley Kavanaugh, who married the judge in 2004.

But supporters of both Judge Kavanaugh and Prof Ford have also been vocal.

A group of friends and former colleagues of the judge held a press briefing on Friday behind the banner #IStandWithBrett.

Maura Fitzgerald, a friend since high school, said: "The allegation against Brett is inconsistent with everything that I have known about him as a person."

Twelve of Prof Ford's family members have written an open letter, posted on Twitter, in which they call her "highly ethical", adding that "her honesty is above reproach".

"Chrissy is not someone who chooses to be in the spotlight," the letter said.