Russian President Vladimir Putin has rejected Turkey's calls for a truce to prevent a "bloodbath" in north Syria. 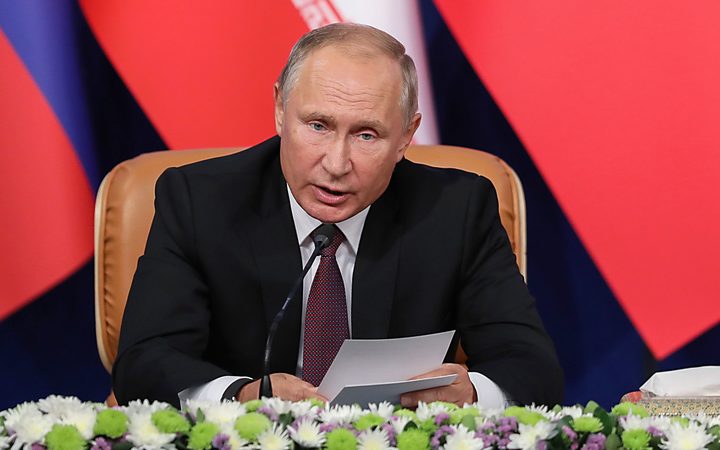 At a trilateral meeting with Iran and Turkey, Mr Putin said Russia would continue its fight against "terrorists" in Idlib province.

Syrian military forces, backed by Russia and Iran, are poised to launch a major offensive there soon.

The three-way meeting in Tehran had been seen by many as a final chance to prevent a large-scale battle in Idlib.

Syria has been in a civil war since 2011, after a peaceful uprising against President Bashar al-Assad turned into a conflict that has killed more than 350,000 people.

Why are these countries involved?

Iran, Russia and Turkey have played central roles in the Syrian conflict.

Turkey - which has long backed some rebel groups - fears an all-out assault will trigger another major refugee crisis on its southern border.

Turkish President Recep Tayyip Erdogan told his Russian and Iranian counterparts: "We don't want Idlib to turn into a bloodbath."

"Any attack on Idlib would result in a catastrophe. Any fight against terrorists requires methods based on time and patience."

However, Russia and Iran are allied to Syria's President Assad, and say jihadist groups in Idlib must be wiped out.

At Friday's meeting, Iran's President Hassan Rouhani argued that "fighting terrorism in Idlib is an unavoidable part of the mission of restoring peace and stability to Syria".

Meanwhile Mr Putin said "the legitimate Syrian government has a right and must eventually take under control of its entire national territory".

Why is Idlib so important?

The province is the last major stronghold of the rebel and jihadist groups which have been trying to overthrow Mr Assad for the past seven years.

It straddles major highways across Syria - and if it is retaken by the government, would leave the rebels with just a few isolated pockets of territory across the country.

The province is not controlled by a single group, but rather by a number of rival factions, including a jihadist alliance linked to al-Qaeda, and a rival National Liberation Front which is backed by Turkey.

Up to 30,000 rebel and jihadist fighters are believed to be in Idlib.

But the vast majority of Idlib's residents are civilians. The UN says the region is home to some 2.9 million people, including a million children.

More than half of the civilians have already been displaced at least once from elsewhere in Syria and have nowhere left to go.

Why is concern growing?

The UN fears a large-scale offensive in Idlib will lead to a humanitarian disaster.

Without a political solution in Syria, "we will see this war reach new levels of horrors", the UN special envoy on Syria, Staffan de Mistura, said.

Meanwhile, the new US envoy for Syria, Jim Jeffrey, said the anticipated conflict would be a "reckless escalation", and that "there is lots of evidence that chemical weapons are being prepared."

He did not give details of the evidence he was referring to.

Mr Jeffrey said a "major diplomatic initiative" was now needed, and there was "a new commitment" by President Donald Trump to remain involved in Syria until the Islamic State group (IS) was defeated and Iranian fighters left the country.

Mr Jeffrey said President Assad had "no future as a ruler" in Syria, but it was not Washington's job to oust him. He said the US would work with Russia on a political transition.

What do we know of chemical weapons use?

he Syrian government has denied ever using chemical weapons.

However, experts from the UN and the Organisation for the Prohibition of Chemical Weapons (OPCW) have said government forces were behind an attack involving the nerve agent Sarin on a rebel-held town in southern Idlib in April 2017 that killed more than 80 people.

The US state department warned on Monday that Washington would respond to any new chemical attacks by the Syrian government or its allies.