The UN envoy to Syria has warned of a "perfect storm" in north-west Syria if the government goes ahead with its threatened offensive against rebels. 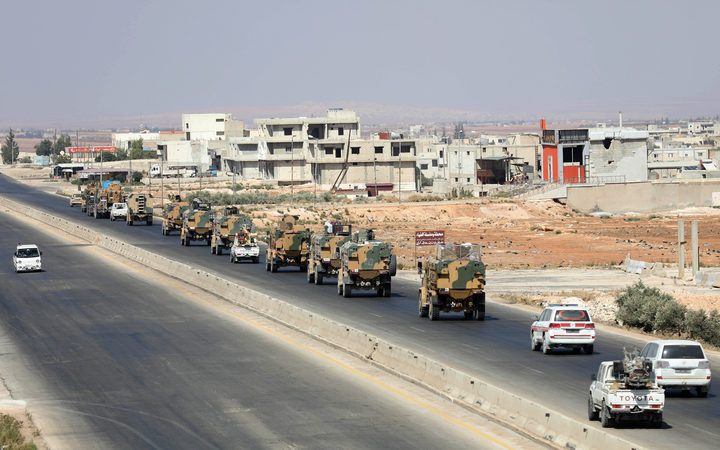 Turkish forces are seen in a convoy on a main highway between Damascus and Aleppo, near the town of Saraqib in the northern Idlib province. Photo: AFP

Staffan de Mistura called for humanitarian corridors to be set up to allow civilians to be evacuated temporarily.

With rebels defeated in most of Syria, such an offensive could prove to be the last big battle of the civil war.

Russia, the government's main military ally, has also stepped up its rhetoric.

Foreign Minister Sergei Lavrov said "terrorists" must be wiped out in Idlib, accusing them of using civilians as human shields.

Both he and his Syrian counterpart, Walid Muallem, accused rebels of preparing to stage a chemical attack in Idlib in order to blame pro-government forces and draw new US military retaliation.

Mr de Mistura said both the government and the rebels had the ability to make chlorine-based chemical weapons.

Almost three million people live in Idlib where, according a UN estimate, there are around 10,000 al-Nusra and al-Qaeda jihadist fighters.

The fighters must be defeated, Mr de Mistura said, but not at the expense of thousands of civilian lives.

"There is a perfect storm based on warnings, counter-warnings which is gathering around and due to the dilemma, which is a true dilemma on how to defeat terrorists in Idlib and at the same time avoid affecting a huge number of civilians," he said.

"So, while we are aware that efforts and discussions are taking place to avoid the worst-case scenario, one cannot ignore that miscalculations may indeed occur leading to unforeseen escalation and we are all very much concerned."

The UN is desperate to avoid the deaths of civilians seen recently in other parts of Syria like Aleppo, Raqqa or the Eastern Ghouta, and its diplomats are pleading with those fighting to show restraint.

Mr de Mistura offered to go to Idlib personally to set up a humanitarian corridor which, he acknowledged, would mean evacuating people into government-controlled territory.

"That area most likely is under government control, so that requires a constructive, effective government support and a UN presence," he said.

Speaking after talks in Moscow, Syria's foreign minister was quoted by Reuters news agency as saying his government would "go all the way" in Idlib and its main target were the Nusra militants.

Nusra has changed its names several times and is currently known as Hayat Tahrir al-Sham.

Both Nusra and al-Qaeda are listed as foreign terrorist organisations by the US state department.

Moscow backed previous Syrian government offensives with its airpower and the Russian navy is now gathering in strength in the Mediterranean Sea.

Kremlin spokesman Dmitry Peskov said major naval drills, due to begin on Saturday, were justified by events in Syria.

He added the "hotbed of terrorists" in Idlib must be tackled.

After more than seven years of fighting, more than 400,000 people are dead or missing, and more than half the population have been driven out of their homes.

Idlib has been a haven for rebels and their families evacuated out of areas won back by the government, but there is no obvious place for them to move to within Syria if they abandon the province now.

Any offensive on Idlib could raise tensions with Turkey, which maintains observation posts around rebel territory as part of a "de-escalation deal" with Russia and Iran, another ally of the Syrian government.