In an extraordinary move, the New York Times has published an anonymous essay from a senior White House official detailing how staff work to frustrate parts of his agenda and curb the President's worst instincts. 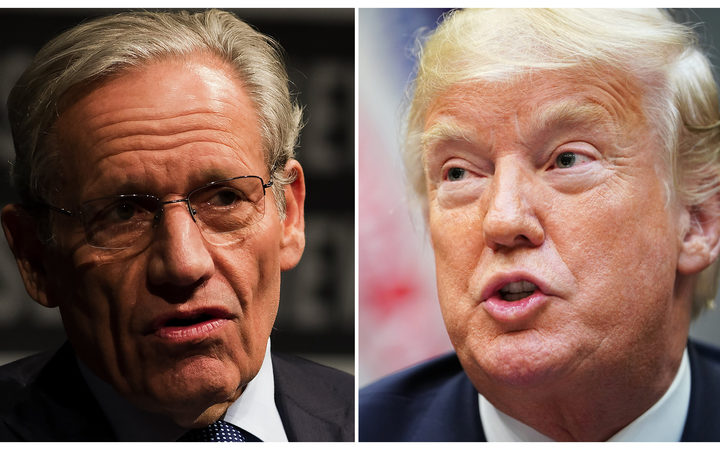 The White House under President Donald Trump is mired in a perpetual "nervous breakdown" with staff constantly seeking to control a leader whose anger and paranoia can paralyze operations for days, according to a new book by Bob Woodward. Photo: AFP

Headlined "I am part of the Resistance inside the Trump Administration" it comes after a furore erupted over a new book by longtime Washington Post political reporter Bob Woodward, Fear: Trump in the White House details a toxic working environment with advisers working around their boss.

The unknown official states bluntly: "The dilemma - which he (Trump) does not fully grasp - is that many of the senior officials in his own administration are working diligently from within to frustrate parts of his agenda and his worst inclinations. I would know. I am one of them."

The writer says that it wants the administration to succeed and believes that many of its policies are making America more prosperous. But that there are a number of staffers who put the health of the country ahead of the administration.

"The root of the problem is the president's amorality. Anyone who works with him knows he is not moored to any discernible first principles that guide his decision making."

The writer paints a picture of a president who is impulsive who makes "half-baked, ill-informed and occasionally reckless decisions" which staff have to try to disable.

"The result is a two-track presidency." Staff trying to do the right thing and the President making rapid fire, irrational decisions.

The New York Times said it had taken "a rare step" of publishing the anonymous essay.

"We believe publishing this essay anonymously is the only way to deliver an important perspective to our readers."

Meanwhile, Mr Trump has condemned a book on his White House by renowned Watergate journalist Bob Woodward as a "con on the public".

Mr Trump's chief of staff and defence secretary, in responses posted by the president on Twitter, described the book as "pathetic" and "fiction".

In the book, senior aides are quoted as saying they hid sensitive documents to prevent Mr Trump signing them.

They are quoted as calling him an "idiot" and a "liar".

The book - Fear: Trump in the White House, scheduled for release on 11 September - reveals a chaotic administration having a "nervous breakdown of executive power".

Woodward is a widely respected and veteran journalist who helped expose President Richard Nixon's role in the Watergate scandal in the 1970s.

He sent out a series of tweets carrying his own views, along with statements from Defence Secretary Jim Mattis, chief of staff John Kelly and White House spokeswoman Sarah Huckabee Sanders.

Mr Trump said quotes attributed to Mr Mattis and Mr Kelly were "made up frauds, a con on the public. Likewise other stories and quotes".

He says the book is "already discredited" with "so many lies and phony sources", rejecting an allegation that he had used the terms "mentally retarded" and "dumb Southerner" to describe Attorney General Jeff Sessions.

The statement from Mr Mattis describes the book as "a product of someone's rich imagination" and adds: "The contemptuous words about the president attributed to me in Woodward's book were never uttered by me or in my presence."

The statement from Mr Kelly said: "The idea I ever called the president an idiot is not true... He always knows where I stand and he and I both know this story is total BS... This is a pathetic attempt to smear people close to President Trump."

Ms Sanders said the book was "nothing more than fabricated stories, many by former disgruntled employees, told to make the president look bad".

In an interview with the Daily Caller, Mr Trump said that "it's just another bad book", adding that Woodward "has a lot of credibility problems".

The president resumed his attack on the book in a tweet on Wednesday morning:

Isn’t it a shame that someone can write an article or book, totally make up stories and form a picture of a person that is literally the exact opposite of the fact, and get away with it without retribution or cost. Don’t know why Washington politicians don’t change libel laws?

One of the main claims is that current and former aides kept sensitive documents off his desk to prevent him from signing them, or took different actions to those demanded by the president.

This amounts to an "administrative coup d'état", Woodward says.

The book says Mr Trump had ordered the Pentagon to arrange the assassination of Syrian President Bashar al-Assad.

"Let's [expletive] kill him! Let's go in. Let's kill the [expletive] lot of them," Mr Trump is reported to have told Mr Mattis.

The book says Mr Mattis acknowledged Mr Trump's request but then, after the conversation, told an aide he would not do "any of that".

Mr Mattis is also quoted as saying Mr Trump had the understanding of "a fifth- or sixth-grader" - the age of 10 or 11 - in understanding foreign affairs.

The documents would have allowed the president to withdraw from the North American Free Trade Agreement and a trade deal with South Korea.

"It felt like we were walking along the edge of the cliff perpetually," Mr Porter is quoted as saying.

It would be hard to find a journalist with greater credentials. After all, his investigations with Washington Post colleague Carl Bernstein helped bring down Richard Nixon and he has written books on many leaders, including George W Bush and Barack Obama.

He is certainly one of the most respected and well-informed political analysts.

The BBC's North America reporter Anthony Zurcher said that Woodward has unrivalled access to the corridors of power, and the general Washington consensus is that it is better to talk to him than not, since colleagues - and enemies - are certainly giving him their side of the story.

Back in 2013, Mr Trump had responded to a row between Woodward and the Obama administration with a tweet saying: "Only the Obama WH can get away with attacking Bob Woodward."

Did the president speak to Woodward?

The Washington Post released an audio recording and transcript of a call the president made to Woodward in early August.

In it, the president said to the reporter "I think you've always been fair" and claims he was never contacted for an interview or informed of Woodward's soon-to-be-published work.

The assertion is rebutted by the reporter, and the transcript suggests White House aides, including adviser Kellyanne Conway, were aware of requests for Trump-Woodward talks.

Woodward said he has "gained a lot of insight and documentation" and that his book will be a "tough look at the world and your administration and you".

"I assume that means it's going to be a negative book," the president replies. "So I have another bad book coming out. Big deal."

Woodward said: "I believe in our country, and because you're our president, I wish you good luck."