The US military says it is cancelling $300 million (NZD$450m) in aid to Pakistan over what it calls Islamabad's failure to take action against militant groups. 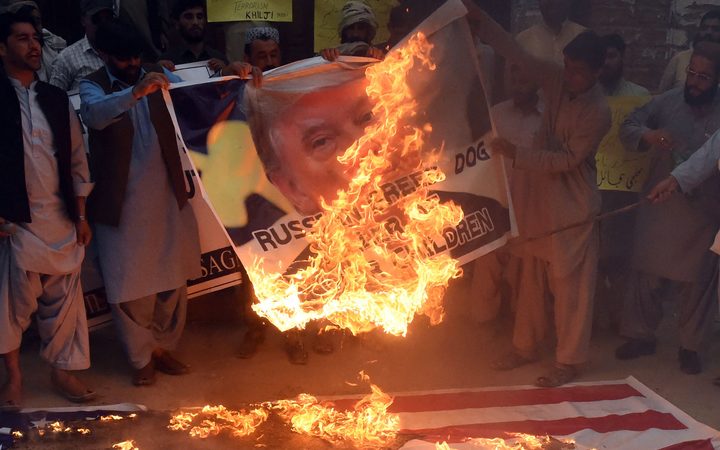 Pakistani protesters burn a US flag and a banner bearing an image of the US President Donald Trump in April 2018 Photo: AFP

President Donald Trump has previously accused Pakistan of deceiving the US while receiving billions of dollars.

Pentagon spokesman Lt Col Koné Faulkner said the US military would aim to spend the money on other "urgent priorities".

The move, which needs to be approved by US Congress, is part of a broader suspension announced in January.

The US state department has criticised Pakistan, a key ally, for failing to deal with terrorist networks operating on its soil, including the Haqqani network and the Afghan Taliban.

"We continue to press Pakistan to indiscriminately target all terrorist groups," Col Faulkner said in a statement on Saturday, adding that the $NZ450m aid - which had earlier been suspended - should be used elsewhere due to "a lack of Pakistani decisive actions" in tackling the issue.

The announcement comes just days before US Secretary of State Mike Pompeo is due to visit Pakistan to meet the country's new prime minister, Imran Khan.

In January, the US government announced it was cutting almost all security aid to the country.

The US and others have long complained that Pakistan provides a safe haven to militant networks, allowing them to carry out cross-border attacks in Afghanistan - something that Islamabad denies.

Separately on Friday, the US said it was ending all funding for the UN's Palestinian refugee agency - the United Nations Relief and Works Agency (Unrwa) - which it described as "irredeemably flawed".

The Haqqani network is a militant group that focuses most of its activities on neighbouring Afghanistan, which has complained for years that Pakistan allows it to operate unimpeded from its soil across the border.

Both the Haqqani Network and the Afghan Taliban have launched attacks in Afghanistan that have killed US forces, and US officials have long argued that Pakistan, and specifically its ISI intelligence service, provides safe havens to them.

Pakistan has long been accused of using the Afghan Taliban to further its foreign policy interests in the country. The ISI first became involved in funding and training militants in Afghanistan after the Soviet invasion in 1979.

Although since 2001 Pakistan has allowed its territory to be used to supply international troops during the war in Afghanistan, and co-operated with the West in fighting some terrorists groups like al-Qaeda, analysts say it has continued to give shelter and support to Afghan insurgents.

Its aim has been to limit the influence in Afghanistan of its chief regional rival, India.