Australian filmmaker James Ricketson has been found guilty of espionage and sentenced to six years in a Cambodian prison. 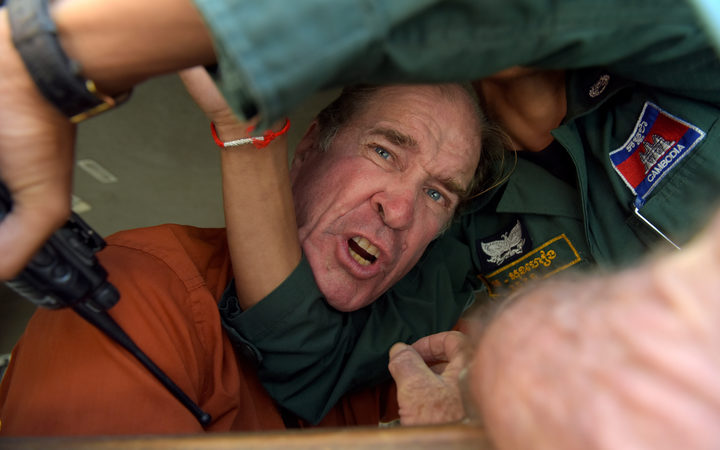 Australian filmmaker James Ricketson reacts as he attempts to speak to journalists from a prison vehicle after his verdict at the Phnom Penh court. Photo: AFP

A trio of judges ruled Ricketson, 69, had for more than 20 years used documentary projects and humanitarian work as cover while collecting information that could jeopardise Cambodia's national security.

When the verdict was delivered, Ricketson turned to the gallery and asked a question that has thus far gone unanswered: "Which country am I spying for?"

From the window of the prison van taking him away from court, Ricketson cried out again: "Who am I spying for?"

The case against Ricketson amounted to a series of photographs and emails taken from his computer, which the prosecution presented as evidence he came to Cambodia with the "intention to incite hatred".

Ricketson was arrested in June last year, a day after he was reprimanded by authorities for flying a photographic drone without permission over a political rally.

Soon after, government-friendly media outlets named him as an "important spy" in a US-led plot to foment a "colour revolution" and overthrow Prime Minister Hun Sen, who has ruled Cambodia for more than 30 years.

Neither the US nor Australia has made a public statement about Ricketson.

The accusations against Ricketson came amid a spate of politically-charged moves by Hun Sen's Cambodian People's Party, which was facing perhaps the greatest threat ever to its three-decade rule.

Independent media were shut down and journalists jailed, non-government organisations were ordered out of the country, and the surging opposition party was dismantled and its leader sent to a remote prison following a midnight raid on his home.

Then, last month, with almost all voices of dissent vanquished or paralysed by fear, the Cambodian People's Party secured all 125 parliamentary seats in an election that was widely slated as a "sham". 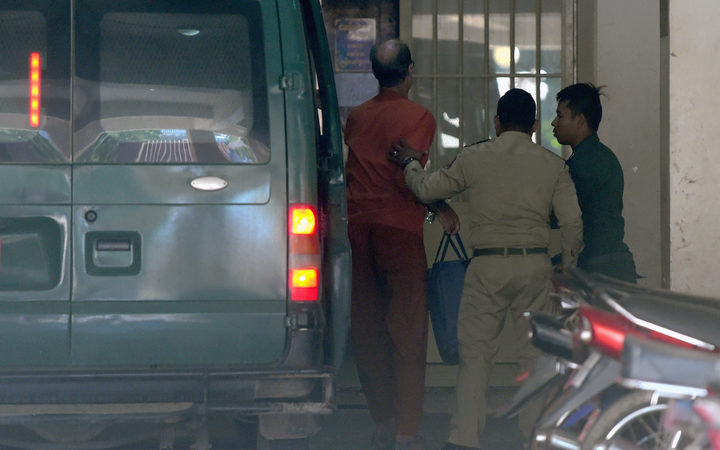 Australian filmmaker James Ricketson (L) exits a prison vehicle as he arrives at court to hear his verdict in Phnom Penh. Photo: AFP

Outside the courthouse, Ricketson's son, Jesse, who relocated to Phnom Penh to help coordinate the defence, said he and his family were "utterly devastated" by the ruling.

"All my thoughts are for my dad and how he must be feeling right now, sitting in a hot prison truck facing what could be the last years of his life in jail," he said.

The Ricketson family said they would keep fighting despite the ruling.

"We are in utter shock at this outcome and that James, an innocent Australian, has been sentenced so harshly. Our family lives this tragedy daily."

The family added "James is not a spy" and called on the Australian Government to step in.

"This is a humanitarian issue more than anything else. He could very easily die in there. That would be the ultimate tragedy," they said.

The Cambodian-Australian community called on the Australian Government to condemn Ricketson's conviction and demand his release within four weeks.

It also called for "governments of all the free world" to take action against Hun Sen.

"He can expect to get all the consular and other support from the Australian Government you would expect in these circumstances," Mr Morrison said after arriving in Jakarta as part of his first trip as PM.

Minister for Foreign Affairs, Marise Payne, said Mr Ricketson must consider his response to the court's decision using the avenues open to him under Cambodian law.

"The Australian Government will consider what further appropriate support we can provide after that time."

Ricketson repeatedly insisted during the trial that he had no political agenda and his work making documentary films was journalistic in nature.

Following a 14-month investigation, the prosecution produced its evidence: a series of photographs of police in formation or at work, a series of emails between Ricketson and Cambodian opposition leaders, and one letter to then-prime minister Malcolm Turnbull, urging him to rescind an invitation for Hun Sen to visit Australia in 2016.

In one email from 2013 to a friend, Ricketson made it clear what he thought of the key figures in Cambodian politics, calling Hun Sen "an old fashioned dictator" and referring to him as the villain from Star Wars.

The correspondence clearly demonstrates Ricketson's preference for the opposition and poor opinion of Hun Sen, but contains no secret or sensitive information.

The photos, which the prosecution posited were taken by a drone in restricted areas, were clearly taken in public spaces.

Phil Robertson, deputy director of Human Rights Watch's Asia office, said the trial "was an expose of everything that's wrong with the Cambodian judicial system: bogus and unsubstantiated charges, over a year of arbitrary pre-trial detention, prosecutors with little or no evidence, and political hacks serving as judges who rule as ordered rather than based on what happens in court".

Ricketson has 30 days to appeal the sentence.

Having already been locked in the Prey Sar prison for 14 months, Ricketson is suffering a number of health issues, including weight loss and constant skin problems.

Ricketson's family says he is being kept in cramped conditions in Prey Sar, suffering because of "lack of sleep, subsistence food and close to zero medical care".

"We would be very concerned about his health over six years in those conditions, and his mental state," Ricketson's nephew Bim Ricketson told reporters in Sydney.

"There are no mattresses and, importantly, very little medical attention available. For someone who is sick and has a number of ailments, it is very challenging for him."