About 200 Cambodians living in New Zealand have protested at Parliament today ahead of tomorrow's election in their home country. 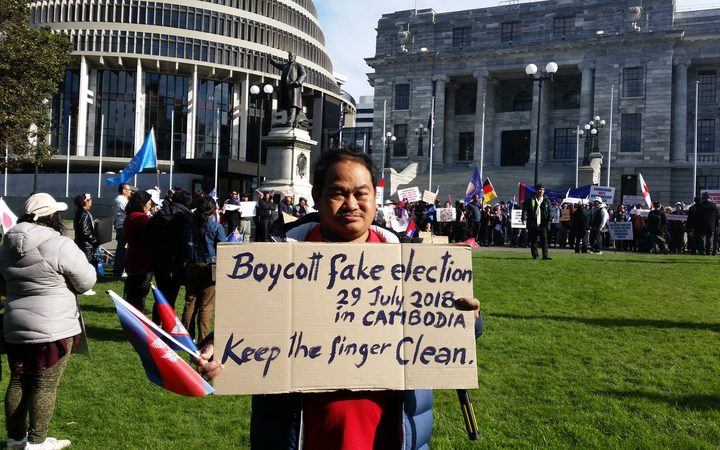 The Cambodian People's Party (CPP) is running without major challenge, after the main opposition party was made illegal last year, its leader jailed and its MPs banned from politics for five years.

While 19 small parties have registered for Sunday's vote, all are either linked to the CPP or are too tiny to aspire to more than a seat or two.

Protesters delivered a letter to Labour's Kris Faafoi on the steps of Parliament asking the New Zealand government not to recognise the results from the upcoming election. 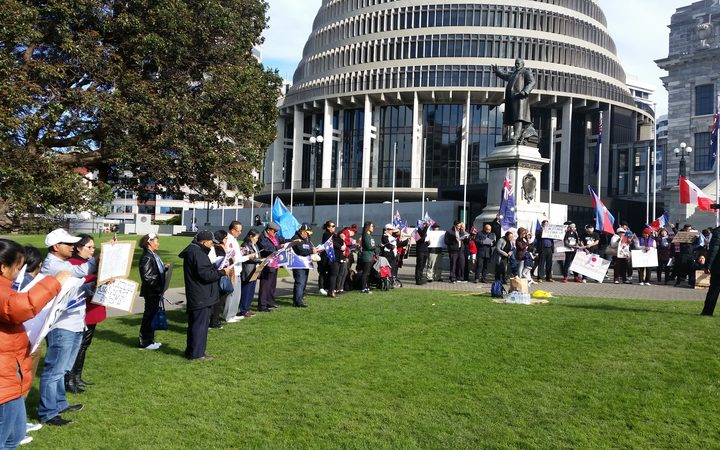 People came from around the country to join the protest.

Protester Hok Mao said he was hoping to send a message to people in Cambodia.

"Most important thing is to just want to show our solidarity to our Cambodians back home, to protest the election, the sham election that's going to happen tomorrow."

Chheun Sean flew down from Whangarei with his family to be in Wellington for the protest.

He said the election was fake and he was protesting because people in his home country felt too scared to speak out.

Meanwhile, Australia has said it will not send diplomats to monitor the Cambodian election, and the United States has taken a similar stance - staying away from the polls to avoid legitimising an election that is almost guaranteed to continue Prime Minister Hun Sen's 33-year reign.

Threats, intimidation, bribery and the shutdown of independent media have marred the lead-up to the vote.

"Reflecting our concerns with the electoral process, Australia will not monitor the national election," a spokesperson for Australia's Department of Foreign Affairs and Trade said.

"We will continue to raise our concerns at the highest levels of the Cambodian Government."

The decision was welcomed by the now-defunct opposition.

"I'm delighted and I thank Australia - a democratic country - for supporting us and taking our side," Thach Seitha, a former senator for the outlawed Cambodian National Rescue Party (CNRP), said.

The response from Hun Sen's ruling party was frosty.

The ruling party has raised tens of thousands of monitors - many under the youth wing of Hun Sen's son Hun Many - but it is estimated as many as half of the polling stations will not have an independent monitor.

The National Election Commission is stacked with officials considered loyal to the ruling party.

Opposition figures have called for a boycott of the election, a movement that's become known as the "clean finger" campaign - a reference to the indelible ink used to mark the index finger of voters.