Analysis - "Democracy is now dead in my country." That's the blunt assessment from Cambodian opposition leader Sam Rainsy, leader of the "Cambodian National Rescue Movement", and in New Zealand for talks with officials. 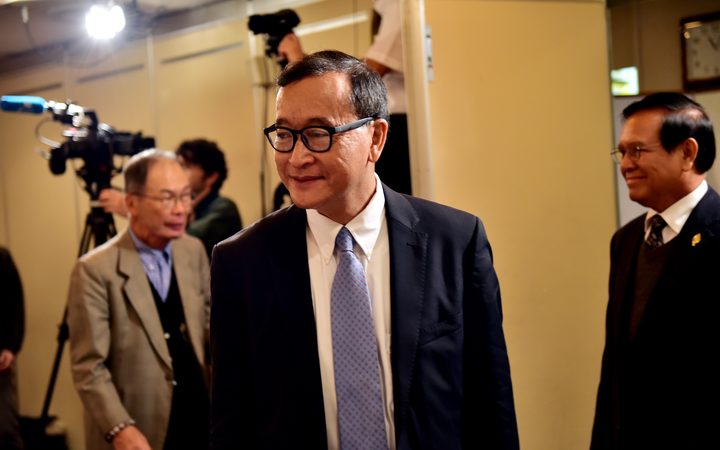 "It's dead because the Hun Sen government killed it," he shrugs.

And it's hard to argue with the assessment, as recent moves by the Cambodian leader Hun Sen to close independent media, declare the opposition illegal, imprison its leaders, and send many more into exile, have pushed Cambodia closer to autocracy.

Some 25 years after peace talks in Paris drew up a roadmap for reconciliation between warring factions in the country, Cambodia under Hun Sen - the former Khmer Rouge fighter who has led for more than 30 years - is moving closer to a political one-party state, which looks increasingly like China's.

Its recently-released "five year plan" proposes an increasing level of surveillance on the population, a continuing crackdown on independent media, and changes to the constitution that will see a radical restriction in any political activity deemed to be against the "national interest".

All this is against the background of looming elections on 29 July.

"They will be a sham of course," said Sam Rainsy.

"A foregone conclusion that will really do little more than to signal to the outside world that a dictatorship has Cambodia in its grip."

In his role as President of the opposition CNRM, Mr Rainsy works for change from his home in exile in Europe. He was forced to flee and last year the Supreme Court ruled the major opposition party illegal, accused of plotting a coup.

"We are just looking at a return to the one-party system that prevailed during the cold war, before the Paris Peace Agreements were signed in 1991," he said.

"So to avoid that ... the international community, including New Zealand, must issue a warning to Hun Sen ... any government formed on the basis of an electoral farce will be denied legitimacy," he said.

That in turn endangers the massive business interest controlled by Hun Sen's family, but it also threatens the continuing international development assistance and access to export markets his regime relies on.

According to Rainsy, the recent round of repression has isolated Hun Sen's Cambodia from the rest of the world, except China - which has seized the occasion to invest more and more heavily in the country, and emboldened Hun Sen, who says he can face international isolation with massive and unconditional support from China.

He sees the situation as reminiscent of Myanmar under Thein Sein, and also similar to the one prevailing in Cambodia under Pol Pot, 40 years ago.

"Pol Pot, with his 'killing fields', was cut off from the rest of the world - except China which propped up the murderous Khmer Rouge regime."

Rainsy sees Hun Sen's present anti-Americanism - and his broader anti-Western stance - as reminiscent of Pol Pot during the Cold War.

And he says Cambodians would like to see Australia and New Zealand both showing leadership when it comes to helping democracy prevail in Eastern Asia.

In the bloc of East Asian authoritarian countries, he believes Cambodia is where the pressure should be applied, as it is the country where the democratic opposition is ... or was ... on the brink of reaching power through democratic institutions

"The Cambodian opposition would win a free and fair election ... no doubt," he said. "But they can't do it alone."