Russia plans to hold the biggest war games since a Cold War drill in 1981. 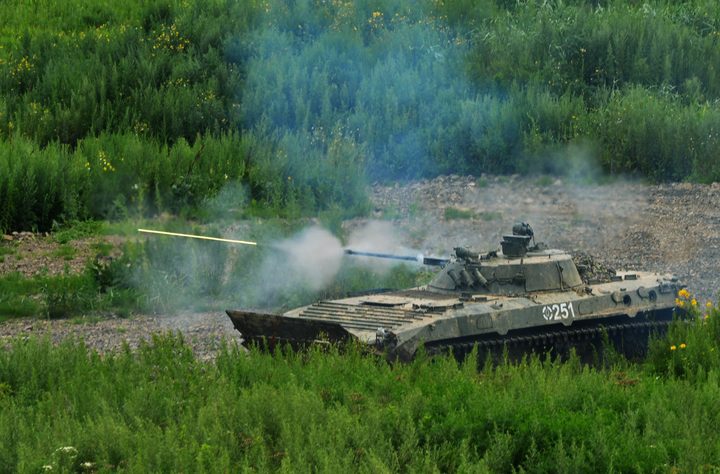 A Russian tank during a tactical drill. Photo: AFP

The military manoeuvres involving 300,000 military personnel will be held next month.

Kremlin spokesman Dmitry Peskov said the Vostok-2018 drills were justified given "aggressive and unfriendly" attitudes towards his country.

Units from China and Mongolia will also take part in the exercises at military ranges in central and eastern Russia.

Mr Peskov said the involvement of Chinese units showed Russia and Beijing were co-operating in all areas.

All Russia's airborne units and two of its naval fleets would also take part in the drills across Siberia and the Russian Far East.

Mr Shoigu compared the Vostok-2018 exercises to Soviet manoeuvres in 1981, which involved a pretend attack on NATO.

"In some ways they will repeat aspects of Zapad-81, but in other ways the scale will be bigger," Mr Shoigu said.

The scale of Vostok-2018 is equivalent to the forces deployed in one of the big World War II battles.

President Vladimir Putin has made military modernisation - including new nuclear missiles - a priority.

Russia's armed forces are reckoned to have about 1 million personnel in total.

It sid the exercises would "not target any third party".

Chinese involvement would include 3200 troops, more than 900 pieces of military hardware and 30 fixed-wing aircrafts and helicopters. Some of the forces have already arrived at the Tsugol training range.

The manoeuvres come at a time of rising tension between NATO and Russia.

It has been increasing since Russia annexed Crimea from Ukraine in 2014 and backed pro-Russian rebels in eastern Ukraine.

NATO has reacted with an increased deployment of forces in eastern Europe, sending 4000 troops to member nations.

Russia says the NATO build-up is unjustified and provocative.

The poisoning of Russian ex-spy Sergei Skripal and his daughter, Yulia, in southern England in March did not help relations, with Nato expelling Russian diplomats.

The UK and the US - both NATO members - say Moscow was behind the attack, although Russia denies it.

Spokesman Dylan White said NATO was briefed on Vostok-2018 in May and would monitor it.

He said the organisation was considering a Russian offer to allow NATO military diplomats based in Moscow to be sent to observe the drills.

"All nations have the right to exercise their armed forces, but it is essential that this is done in a transparent and predictable manner," Mr White said in a statement.

"Vostok demonstrates Russia's focus on exercising large-scale conflict. It fits into a pattern we have seen over some time: a more assertive Russia, significantly increasing its defence budget and its military presence."