Moscow continues to deny the existence of a chemical weapons programme called Novichok but a former Russian scientist claims he helped develop nerve gas for it. 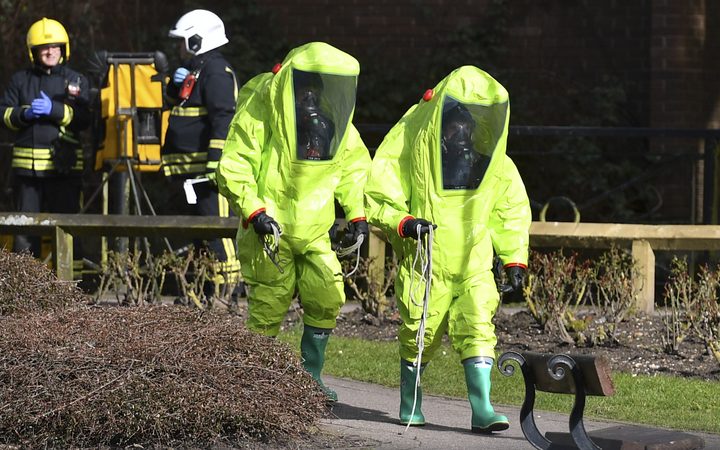 Members of the fire brigade in green biohazard suits work near the bench where a Russian former double-agent and his daughter were found. Photo: AFP

Yulia and Sergei Skripal, a former Russian spy, [were poisoned at their Salisbury home in England last month http://www.radionz.co.nz/news/world/354919/russian-spy-poisoning-nerve-agent-inspectors-back-uk]. Yulia, 33, was discharged from hospital earlier this month and her 66-year-old father is no longer in a critical condition.

A BBC reporter met with Vladimir Uglev, a scientist who worked at a state laboratory in Shikhany, in Russia's Saratov region, and helped develop nerve agents for the Soviet Union.

"The aim of the programme was to produce a substance far more powerful than the nerve agent VX - 10 times more powerful," he tells me. "And that's what we got."

Mr Uglev, 71, claimed he created the poison that was used in the attack on Sergei and Yulia Skripal in Salisbury on 4 March. It was identified in Russia by the code A-234. It was later identified as having been delivered in liquid form.

"I can tell by the mass spectrometry readings, the presence of fluorine, by its molecular weight, and from all the spectrum data I was sent recently."

The reason the Skripals survived was because they received a "small dose … close to the threshold level", Mr Uglev said.

"And judging by how pure their test sample proved to be, this may well have been from a batch made by my own hands," he said.

"These are not the first victims on my conscience," he said.

"If I thought about it, I could probably count a dozen people who've been poisoned by our substances, in different circumstances."

Russian has maintained it had nothing to do with the poisoning and that accusations were "Russophobic" plot and a "provocation" by Britain and America.