A UN report has said top military figures in Myanmar must be investigated for genocide in Rakhine state and crimes against humanity in other areas. 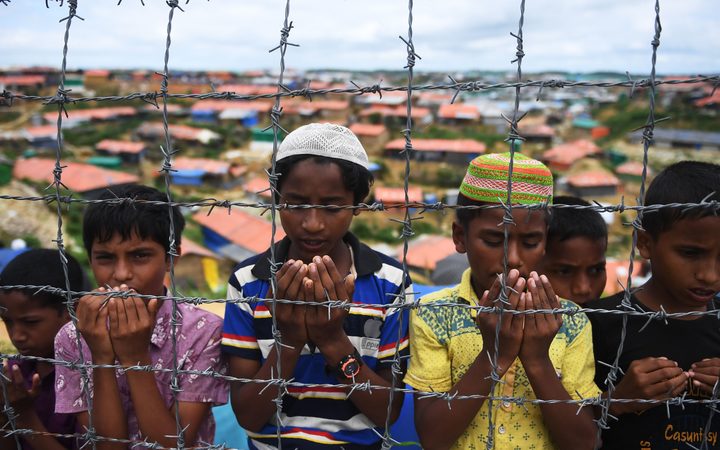 Rohingya refugees perform prayers as they attend a ceremony organised to remember the first anniversary of a military crackdown that prompted people to flee from Myanmar to Bangladesh. Photo: AFP

The report, based on hundreds of interviews, is the strongest condemnation from the UN so far of violence against the Rohingya.

The army's tactics are "consistently and grossly disproportionate to actual security threats," it said.

It named six senior military figures it believes should go on trial.

It was also fiercely critical of Myanmar's de facto leader, Aung San Suu Kyi, for failing to intervene to stop the violence.

The report calls for the case to be referred to the International Criminal Court (ICC).

But the report said the crimes it documented were "shocking for the level of denial, normalcy and impunity that is attached to them".

What crimes does the UN allege?

The UN's Independent International Fact-Finding Mission on Myanmar was set up in March 2017 to investigate widespread allegations of human rights abuses in Myanmar, particularly in Rakhine state.

It began before the military started a large scale military operation in Rakhine in August 2017, after deadly attacks by Rohingya militants.

At least 700,000 Rohingya fled Myanmar in the subsequent violence.

The report said the situation was a "catastrophe looming for decades", and an inevitable result of "severe, systemic and institutionalised oppression from birth to death".

The crimes documented in Kachin, Shan and Rakhine include murder, imprisonment, torture, rape, sexual slavery, persecution and enslavement that "undoubtedly amount to the gravest crimes under international law".

In Rakhine state, the report also found elements of extermination and deportation "similar in nature, gravity and scope to those that have allowed genocide intent to be established in other contexts".

The UN mission did not have access to Myanmar for its report but said it based its findings on primary sources like eyewitness interviews, satellite imagery, photographs and videos.

Who does the UN blame?

The UN mission listed a number of senior army officials who it said bear the greatest responsibility. The list included Commander-in-Chief Ming Aung Hlaing and his deputy.

In general, the military is described as being virtually above the law.

Nobel Peace Prize laureate Aung Sang Suu Kyi "has not used her de facto position as Head of Government, nor her moral authority, to stem or prevent the unfolding events in Rakhine".

The UN paper said some violations and abuses were also committed by armed ethnic groups in Kachin and Shan state or the Arakan Rohingya Salvation Army (ARSA) in Rakhine.

What has been happening?

The Rohingya are one of the many ethnic minorities in Myanmar and make up the largest percentage of Muslims. The government, however, sees them as illegal immigrants from neighbouring Bangladesh and denies them citizenship.

The UN has previously described the military offensive in Rakhine as a "textbook example of ethnic cleansing" and refugees who have fled the violence have told horrific stories of sexual violence and torture.

According to Medecins Sans Frontieres (MSF), at least 6700 Rohingya, including at least 730 children under the age of five, were killed in the first month after the violence broke out.

An internal investigation by the Myanmar military in 2017 exonerated itself of blame regarding the Rohingya crisis.

Rights groups like Amnesty International have long called for the country's top officials to be tried for crimes against humanity over the Rohingya crisis.