Rohingya Muslim militants in Myanmar killed dozens of Hindu civilians during attacks last August, according to an investigation by Amnesty International. 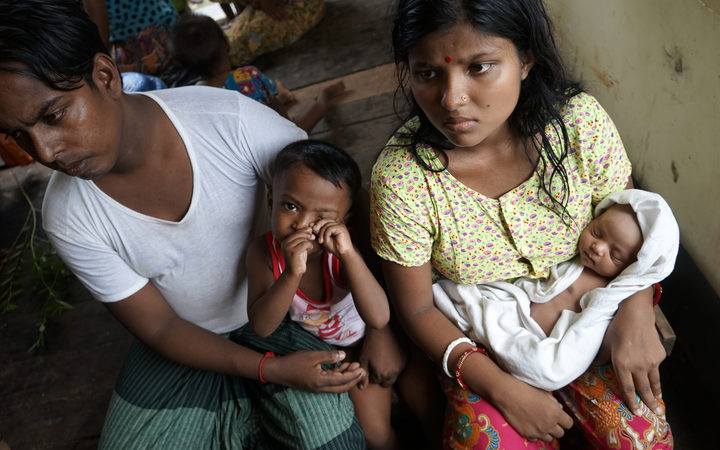 The group called Arsa killed up to 99 Hindu civilians in one, or possibly two massacres, said the rights group. Arsa had denied involvement.

The killings came in the first days of an uprising against Burmese forces, who are also accused of atrocities.

Since August nearly 700,000 Rohingyas and others have fled the violence.

Amnesty says interviews it conducted with refugees in Bangladesh and in Rakhine state confirmed that mass killings carried out by the Arakan Rohingya Salvation Army (Arsa) took place in a cluster of villages in northern Maungdaw Township at the time of its attacks on police posts in late August.

The findings also show Arsa was responsible for violence against civilians, on a smaller scale, in other areas.

"In this brutal and senseless act, members of Arsa captured scores of Hindu women, men and children and terrorised them before slaughtering them outside their own villages," the report said.

Hindu survivors told Amnesty they either saw relatives being killed or heard their screams.

One woman from the village of Ah Nauk Kha Maung Seik said: "They slaughtered the men. We were told not to look at them … They had knives. They also had some spades and iron rods. … We hid ourselves in the shrubs there and were able to see a little … My uncle, my father, my brother - they were all slaughtered."

Arsa fighters are accused of killing 20 men, 10 women, and 23 children, 14 of whom were under the age of eight.

Amnesty said the bodies of 45 people from the village were unearthed in four mass graves in late September. The remains of the other victims, as well as 46 from the neighbouring village of Ye Bauk Kyar, have not been found.

The investigation suggests that a massacre of Hindu men, women, and children in Ye Bauk Kyar happened on the same day, bringing the estimated total number of dead to 99.

Amnesty also criticised what it said was "an unlawful and grossly disproportionate campaign of violence by Myanmar's security forces".

"Arsa's appalling attacks were followed by the Myanmar military's ethnic cleansing campaign against the Rohingya population as a whole."

The human rights group says its findings are based "on dozens of interviews conducted there [in Rakhine] and across the border in Bangladesh, as well as photographic evidence analyzed by forensic pathologists".

"It's hard to ignore the sheer brutality of Arsa's actions, which have left an indelible impression on the survivors we've spoken to. Accountability for these atrocities is every bit as crucial as it is for the crimes against humanity carried out by Myanmar's security forces in northern Rakhine State."

Arsa has denied such accusations in the past, saying that claims of its militants killing villagers were "lies".

The Rohingya - a stateless mostly Muslim minority - are widely despised in Myanmar, where they are considered to be illegal migrants from Bangladesh, despite the fact that some have been in Myanmar for generations.