It is not yet clear what caused the collapse of the Morandi bridge in the Italian city of Genoa, but several explanations have been mooted. 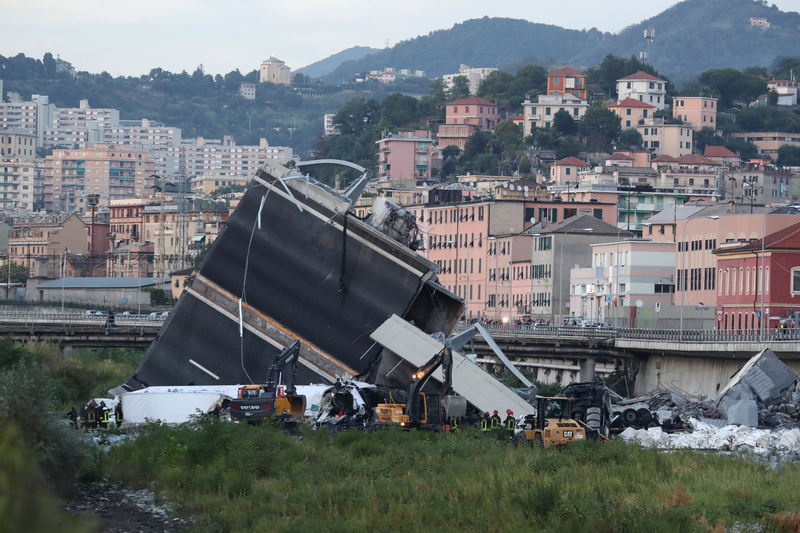 At least 35 people were killed when a bridge collapsed in Italy, police said. 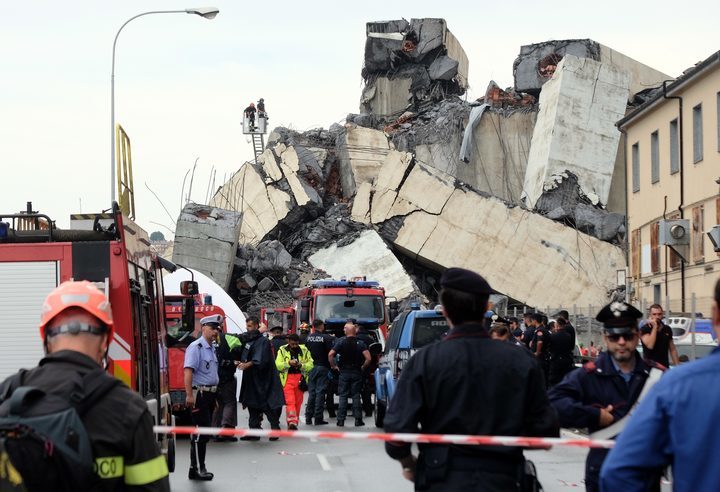 Rescuers are at work amid the rubble of a section of the Morandi motorway bridge that collapsed. AFP 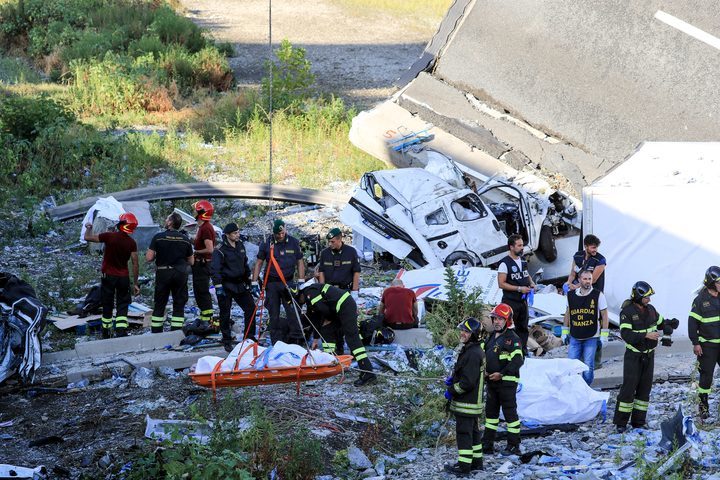 Rescuers and security forces evacuate a body at the site where the Morandi motorway bridge collapsed in Genoa. AFP 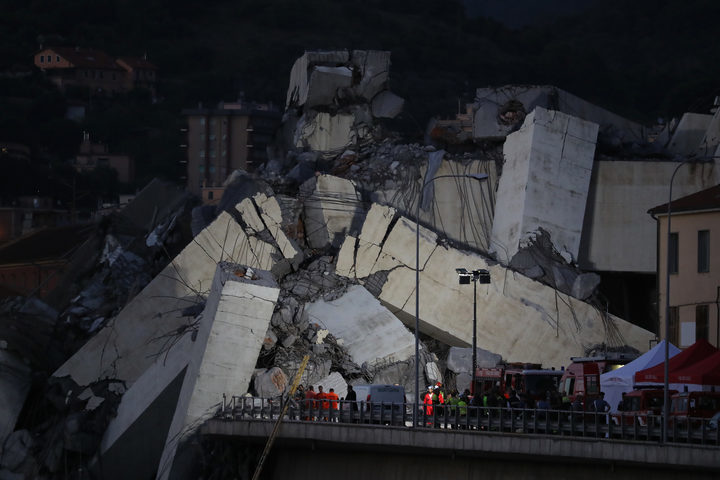 Rescuers inspect the rubble after a section of a motorway bridge collapsed in Genoa. AFP 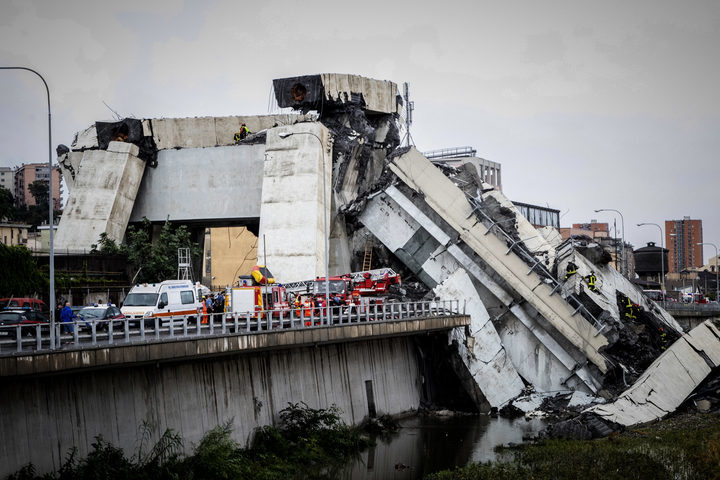 Rescue workers on a part of a Morandi motorway bridge after a section collapsed in Genoa. AFP 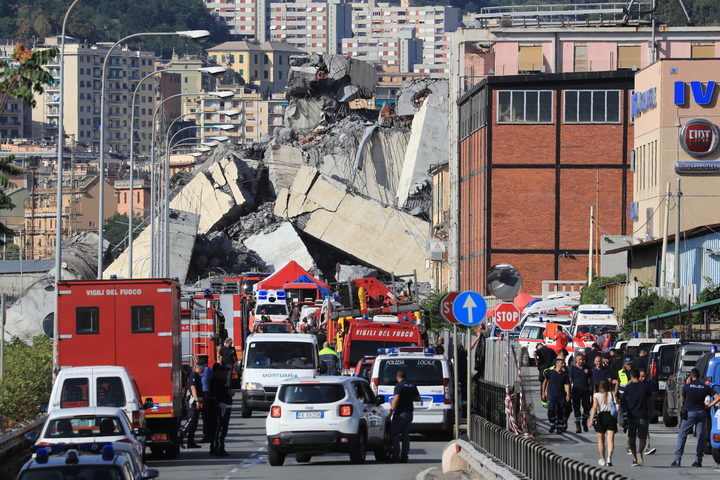 Rescuers work at the site where the Morandi motorway bridge collapsed in Genoa. AFP 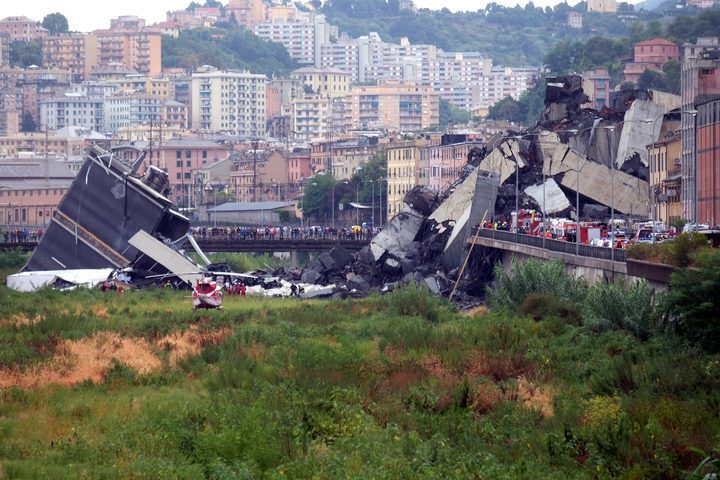 A section of the Morandi motorway bridge that collapsed injuring several people. AFP 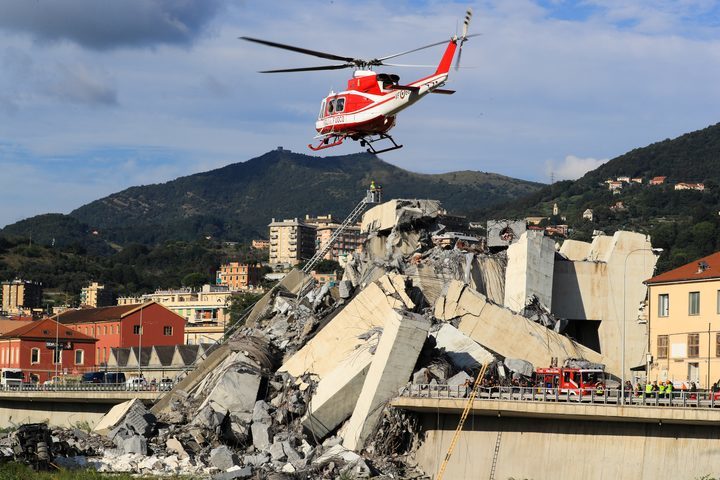 A helicopter hovers as rescuers work at the site where the Morandi motorway bridge collapsed in Genoa.AFP

The dramatic collapse of a 1.2km motorway bridge in the Italian city of Genoa has killed at least 35 people and badly injured 15 people when dozens of vehicles fell 45m, police said.

Reports say cries can be heard from people trapped in the debris. Twelve people are said to be missing.

Some 300 firefighters from across Italy have been using sniffer dogs and climbing gear in the search.

The bridge spans dozens of railway lines as well as an industrial zone housing several factories.

Normally, a bridge is designed to last for at least 100 years. This bridge was completed in 1967.

"A major bridge like this needs regular inspection and maintenance by qualified engineers. This bridge has had quite a lot of maintenance work," said Ian Firth, past president of the UK-based Institution of Structural Engineers, and a structural engineer specialising in bridges.

"Some maintenance intervention appears to have been going on at the time, but we don't know the details so it is not possible to say whether this could have been a factor [in the collapse]," he said.

The motorway operator said work to shore up the bridge's foundation was being carried out at the time of the collapse, during which time it was being constantly monitored.

Restructuring work was also reported to have been carried out on the bridge in 2016.

Poorly carried out maintenance can sometimes be a factor in a bridge collapse.

"In the sad history of bridge collapses, maintenance has sometimes been a factor, if it is poorly planned or implemented," Mr Firth said.

"Maintenance work is often about dealing with and preventing degradation, and the strengthening work the bridge had recently received may have been to deal with degradation." 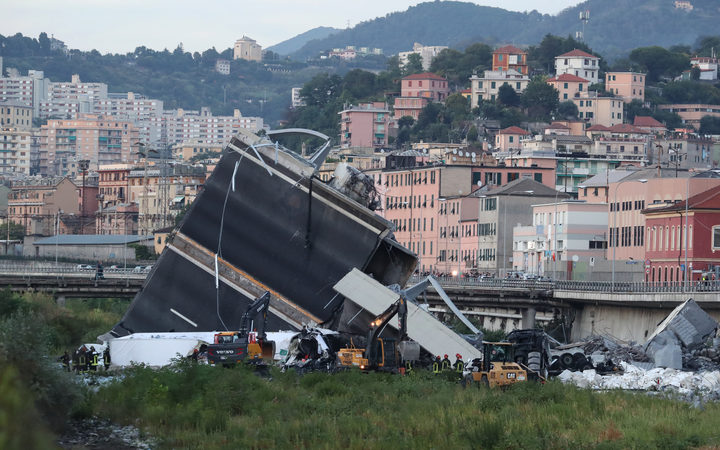 Rescuers inspect the rubble and wreckages by the Morandi motorway bridge after a section collapsed in Genoa. Photo: AFP

The ongoing maintenance costs meant it might have been more economical to rebuild it, according to Antonio Brencich, a structural engineer who lectures at Genoa University.

"Right away, the bridge manifested various problems, beyond the construction costs, which went over budget," he wrote in 2016, in comments published in Italian media.

"There are errors in this bridge. Sooner or later, it will have to be replaced. I don't know when," he warned.

Those problems were later corrected, he said.

In the 1990s, some major repairs were done to the bridge.

"He was an engineer with great insight, but lacking in practical calculations."

The Morandi bridge is very similar to its much larger cousin, the Lake Maracaibo bridge in Venezuela, which were both designed by Mr Morandi.

That bridge "has also experienced problems during its life, so it could be that the design implies a need for a greater degree of maintenance than normal", Mr Firth said.

"As yet, there is no evidence to say whether any impact occurred; it is too early to say what triggered the collapse," he said.

The degradation may have also been compounded by heavy traffic on the bridge, which sees some 25 million vehicles every year and sits on a major artery, the A10, serving the Italian Riviera and linking northern Italy to France.

A 2011 report by Italian highways company Autostrade per l'Italia said that the bridge had been suffering from degradation.

The "queues of cars and the volume of traffic provoke intense degradation of the bridge structure on a daily basis in rush hour, as it is subject to major demands", the report, quoted by Italian news agency Ansa, said.

"The collapse could have been influenced by the consequences of increases in heavy traffic and the punishing treatment the motorway got. It was heavily used, there is no question about that," Mr Firth said.

But the bridge may have also suffered from the marked drop in investment in the country's infrastructure, which lags behind other economies in western Europe.

Engineering experts all agree that in the end, only a thorough specialist investigation will be able to determine the real causes of the collapse.