A major motorway bridge has collapsed near the Italian city of Genoa, leading to vehicles falling some 100 metres. 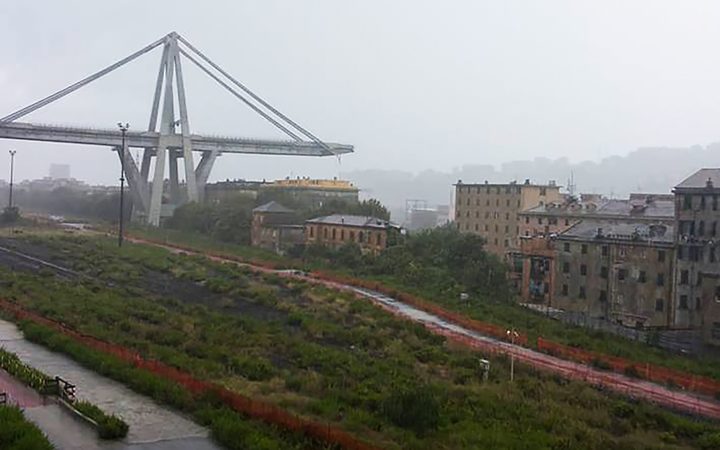 A handout picture from the Facebook account of Paola Pirrera shows a collapsed section of a viaduct on the A10 motorway in Genoa. Photo: AFP or licensors

Italian Transport Minister Danilo Toninelli said it was likely to be "an immense tragedy", while police sources said at least 10 people had died.

The head of the local ambulance service said there were "dozens of dead", Italian news agency Adnkronos reported.

The bridge, a part of the A10 motorway, is about 100 metres tall, Italian media say.

Photographs from the scene show huge sections of rubble on the ground underneath the middle of the bridge.

One image shows a truck perched at the end of the surviving bridge section immediately before the drop.

Franco Nativo, a journalist on the scene for local TV broadcaster Telegenova, told a Sky news channel he could see "at least eight to nine" vehicles crushed under the rubble.

He described the scene as apocalyptic.

Italian police said on Twitter the collapse took place amid a "severe downpour."

The bridge, built in the 1960s, is known as the Morandi bridge. The missing section is dozens of metres in length, and run across the span of the Polcevera stream.

Italian newspaper La Repubblica described that part of the city as "densely inhabited".