Twin wildfires in California, known as the Mendocino Complex Fire, have grown to become the largest active wildfire in state history, officials say. 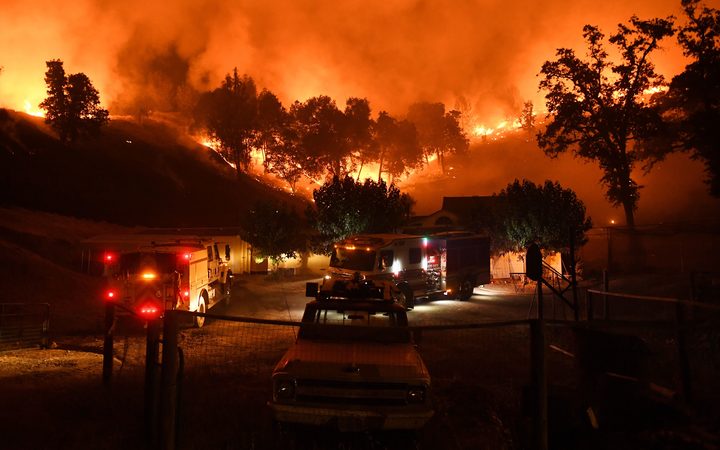 The fires have spread rapidly in recent days to burn 283,800 acres of land - an area almost the size of Los Angeles.

More than 30 New Zealanders have been flown in to help.

The team, which is made up of firefighters, Defence and Department of Conservation personnel and contractors, will work 12 to 14 hour days in the extreme conditions.

Firefighters are tackling 16 major blazes across the state amid hot weather, strong winds and low humidity.

At least seven people have been killed in the Carr fire in the state's north.

Meanwhile US President Donald Trump has reiterated social media comments that the fires' spread is being "made so much worse" by California's environmental laws.

Local officials and experts have criticised and dismissed his tweets.

Where are the fires burning?

More than 14,000 firefighters and hundreds of US army personnel are trying to contain the more than a dozen major fires burning throughout the state.

National Weather Service meteorologist Brian Hurley has warned conditions are not going to immediately improve - with temperatures as high as 43°C being forecast for some areas.

"Look how big it got, just in a matter of days

It is only 30 percent contained so far, with authorities warning it could take another week to get the blaze under control.

Experts say 2018 has the worst start to the fire season in 10 years - partly due to the 2012-2017 drought that killed off large amounts of vegetation.

What is the row with Mr Trump?

The US president has criticised Governor Jerry Brown and California's environmental laws on social media in recent days.

He tweeted on Monday that the wildfires were being "magnified & made so much worse" because of a Californian policy to divert water into the Pacific Ocean.

Governor Jerry Brown must allow the Free Flow of the vast amounts of water coming from the North and foolishly being diverted into the Pacific Ocean. Can be used for fires, farming and everything else. Think of California with plenty of Water - Nice! Fast Federal govt. approvals.

California wildfires are being magnified & made so much worse by the bad environmental laws which aren’t allowing massive amounts of readily available water to be properly utilized. It is being diverted into the Pacific Ocean. Must also tree clear to stop fire from spreading!

"Our changing climate is leading to more severe and destructive fires that we are seeing this year and last," he told Time magazine.

Some believe Mr Trump's tweets refer to a row about water supplies, fish habitat protection and local farmers - but environmental experts say this has no relevance to the state's firefighting capability.