Hundreds of people have taken part in a silent procession in honour of the 72 people killed in the Grenfell Tower fire a year ago. 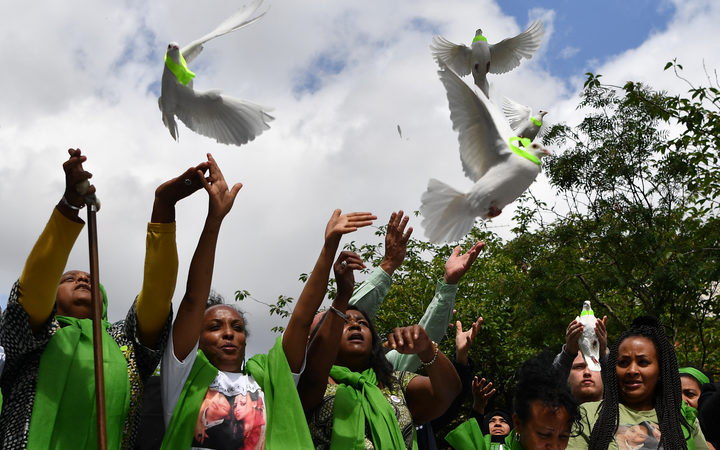 People release doves outside St Helen's church as part of commemorations on the anniversary of the Grenfell fire in West London. Photo: AFP

It came after a memorial service at a church near the west London tower where the names of the victims were read out and bereaved families released doves.

The Bishop of Kensington said people were still "recovering" and seeking answers but there was "positivity".

A 72-second national silence was also held at midday.

The silence was observed across the country, including at government buildings, Parliament and by the Queen and the Duchess of Sussex on a visit to Chester, where the monarch wore green in honour of Grenfell victims.

Silent walks through the neighbourhood near Grenfell Tower have taken place on the 14th of every month since the fire.

Hundreds of people, including Labour leader Jeremy Corbyn, have begun gathering for this month's march, which is preparing to set off.

Clarrie Mendy, who lost two family members in the fire and organised the morning's memorial service attended by several hundred people, said: "It's a service of healing, community, inclusivity and solidarity, to know we are not alone."

Bereaved families were invited to light candles in memory of their loved ones at St Helen's Church, which had been decked out in green - a colour adopted by survivors and relatives of those who died.

There were green ribbons tied around pillars, scarves on seats and banners were hung for the service, where there was African drumming and Amazing Grace was sung.

Addressing the service, Labour MP David Lammy, whose family friend died in the fire, said it was a "bittersweet" moment as the community celebrated their unity but mourned those lost.

The white doves were released outside the church after the service.

Bishop of Kensington Dr Graham Tomlin said there was an atmosphere of "quiet dignity, a sombre mood in the air". 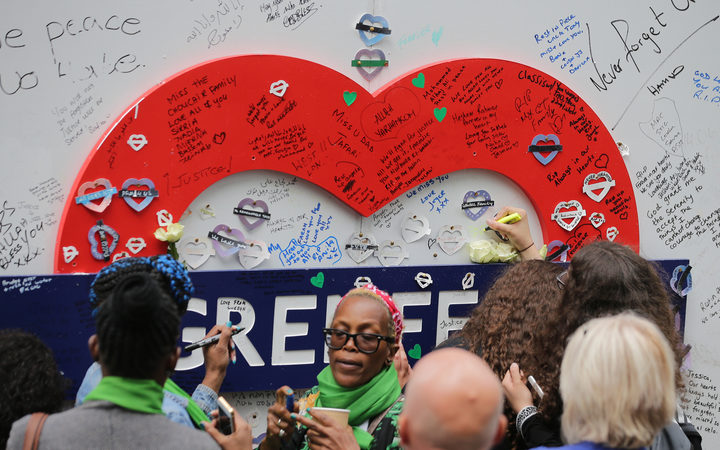 People write messages on a memorial wall near Grenfell Tower on the anniversary of the Grenfell fire in West London. Photo: AFP

Wreaths were laid by London Mayor Sadiq Khan and the Duke of Kent during another service close to the base of the tower.

Singers Stormzy, Adele and Marcus Mumford, who have been vocal supporters of those affected by the fire, were at the event.

Nicholas Burton, whose wife Maria del Pilar Burton died in January and is considered the 72nd victim of the fire, said he chatted with all three singers during the day.

He said: "I went into the sports centre and I hear 'Hi Nick' and it's Adele calling me over, who introduced me to her new husband and then Marcus comes over and we had a hug, then Stormzy comes over - they have all been unbelievable.

"I was thanking them for all they've done behind the scenes that no one knows about."

The victims' names were read out during a vigil at another church in the area - St Clemet's where people fleeing Grenfell Tower had gathered on the night of the fire.

Prime Minister Theresa May wrote on Twitter that she wanted to "pay tribute" to the victims' "family, friends and loved ones for the strength and dignity they have shown".