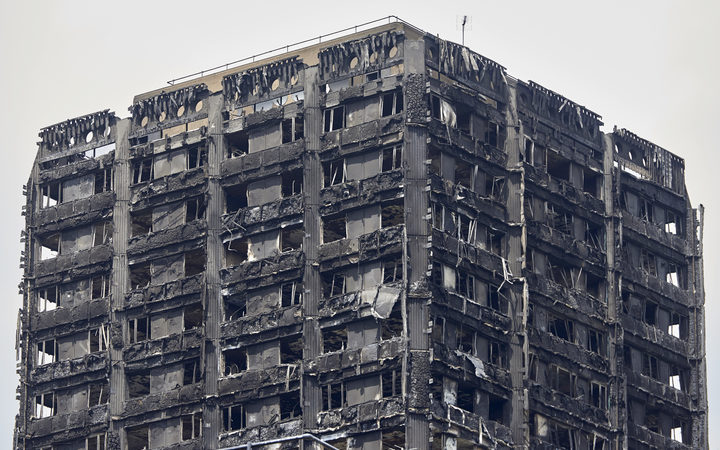 The fire in London's Grenfell Tower housing block a year ago led to the deaths of 72 people. Photo: AFP

The combustible cladding spread fire quickly through the Grenfell Tower apartment block in London almost a year ago, killing 72 people.

Auckland Council has found 116 buildings with similar aluminum composite panels - of which 25 have panels with highly combustible polyethylene cores which burned rapidly in Grenfell Tower fire - and Wellington City Council has identified 113.

Both say when taking into account fire systems like sprinklers and fire alarms the risk to building occupants is low and nobody is being put in danger.

They are encouraging worried building owners to seek advice.

Six hospital buildings at Auckland District Health Board's Grafton campus appear on the list as having either the most combustible or the semi-combustible types of panel.

The council list does not make clear which building has what type. The DHB said it would check that for RNZ.

There was no safety risk from the panels at its buildings, due to the construction design, sprinklers and other safety measures, it said.

"We take the safety of our buildings extremely seriously and when the cladding used on Grenfell Tower was identified as a major factor in the tragedy, we took immediate steps to review the safety of all Auckland DHB buildings that used similar cladding," chief financial officer Rosalie Percival said in a statement.

"There were three stages to our review; our facilities team carried out their own testing, Auckland Council reviewed our buildings and concluded they are safe, and we commissioned an external review by Beca which confirmed the buildings are safe."

Ms Percival added that the panels were not the same as those used in Grenfell Tower. RNZ sought clarification of this and the board is expected to elaborate on that shortly.

The six buildings with PE or FR cladding are: the main hospital building on Park Road, and the hospital support building next to it; Starship hospital; the radiology and cancer and blood services building; the lab and mortuary building; and the main carpark building.

Leading building disputes lawyer Paul Grimshaw said he was surprised at the number of buildings with the cladding and concerned property owners have approached him and his firm about what to do.

"The first thing is to find out if it's a problem and what type of cladding has been used, whether it's dangerous, whether the whole cladding system has been correctly installed.

"If it hasn't, then routinely we look around for people to sue on behalf of body corporates to try to recover this amount of money which, in a radical situation like the one we're describing, may well mean the whole building needs to be reclad."

He said the action would come against those who failed to put up the correct system and could include councils, architects and developers.

"The risk assessments will be redone on the basis of the information that's just been released by the city council and then we'll just have to see what that risk assessment produces and any change it might have."

In Christchurch, 29 buildings with highly combustible polyethylene panel have been identified.

The city council said most complied with rules at the time they were built that placed no restrictions on cladding types on buildings under 25m and fitted with sprinklers.

The council said seven buildings had records that indicated they may have used PE panels that did not comply with the acceptable solutions.

Seventeen buildings in Christchurch were identified with semi-combustible FR panels.