A report leaked to RNZ urges the suspension of approval for widely used aluminium panel on high-rises nine months on from the Grenfell Tower inferno. 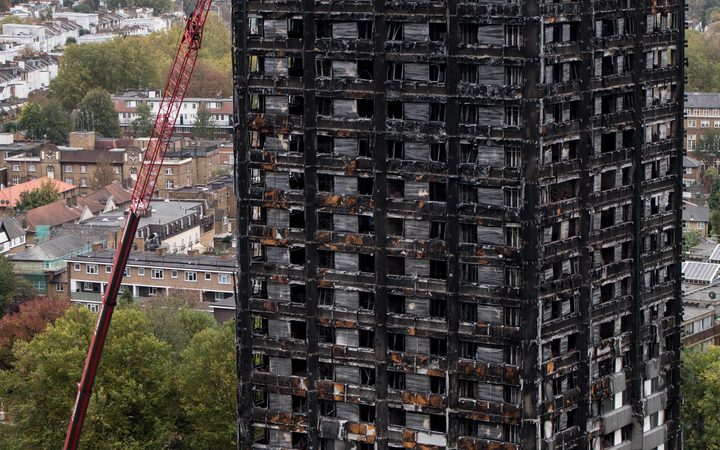 The expert fire engineer hired by the Ministry of Business, Innovation and Employment to audit the certification system, recommended the suspension of six certificates covering 13 types of the aluminium composite panel cladding.

Melbourne expatriate engineer Tony Enright pointed out in his confidential report that a key test in Britain in response to Grenfell had failed these panels.

That was more than four months ago, and the Ministry has not used the Building Act's suspension powers.

Instead, it is saying the audit did not stack up. It has used Dr Enright widely in the past.

"MBIE has since commissioned an independent fire engineer to peer review Enright Consulting's audit and all 13 ACP products in the audit," the ministry said in a statement last night.

"This peer review is vital as MBIE is also mindful that a ... suspension for every [aluminium composite panel] product in New Zealand would have considerable practical and commercial consequences for suppliers and the certifying body."

Similarly in Australia, Dr Enright reported to its federal building authority, but that has not resulted in it withdrawing the six certificates either.

However, Victoria last month moving to clamp down hard on the cladding product.

The authorities on both sides of the Tasman engaged Dr Enright after the Grenfell fire, which killed 71 people, exposed how plastic-filled aluminium composite panels can spread flames quickly up a building.

Subsequent British government testing failed the cladding that was on Grenfell, and was illegal in the UK.

It also failed another type, called FR or fire-resistant panel, when it is used with combustible insulation. FR has less plastic in it, but still spreads the flames too quickly.

Yet this FR panel is still the most widely used type of panel in New Zealand and Australia.

"It is common construction practice to install [aluminium composite panels] over a cavity behind which is combustible material," the Enright report said.

If panels have a Codemark certification then council inspectors must accept it. Codemark is the only building product assurance system in New Zealand that provides this green light, so the bar to issue certificates of approval is meant to be set very high by Codemark's owner, MBIE, and the scheme's manager, Jas-anz.

Dr Enright's leaked report about the panel certificates said they lack supporting information to prove the panels comply with the Building Code.

It quotes him saying such things as "no evidence of compliance has been provided"; that a test report for a panel type is 18-years-old and should not be relied on; that an appraisal is effectively a "cut and paste" job; and most importantly, that there are "reasonable grounds" to believe a panel type would not meet the standards around restricting the spread of fire.

This is the case for all six certificates he looked at, covering 13 panels including six FR types, making up probably 90 percent of the market.

The leak comes after a long wait for this key report.

Within days of the Grenfell fire last June, the ministry said it would "soon" be putting out a report on whether the information on panels was up to scratch.

It didn't. RNZ began lodging Official information Act requests in December for this report. The ministry kept extending these and RNZ had still had no response.

Last night, told of the leak of the report, the ministry said in a statement that once it got Dr Enright's report in November, it had gone back to Jas-anz and the actual certifier, called Certmark International, and got a response from Dr Enright, with the result that it did not have the assurance it needed that the audit was "completed satisfactorily" so was getting a second opinion.

Dr Enright declined to be interviewed for this story.

CertMark International, a small Queensland company, said it had not been asked to suspend any certificates.

"We are awaiting instruction from Jas-anz, however [we] do not feel that any of the current NZ certificates require amending as they all meet the requirements" of the Building Code, its chief executive John Thorpe said in a statement.

The company had supplied evidence of all the panels complying to the satisfaction of Jas-anz, he said.

In Australia, they had tweaked some of the wording of the certificates, from 'may' and 'should' to 'shall', and put them in an enhanced format.

RNZ did not have subsequent reports that provided extra evidence of compliance, extra testing and reports from local chartered engineers, Mr Thorpe said.

The ministry said it would need "adequate evidential grounds" about a risk before it suspended a product.

After the Grenfell Tower disaster in London she argued a temporary halt in certification was needed.

She told Morning Report she could not say if the aluminium composite panels would perform as expected under the building code in the event of a fire.

"I don't know and unless we get this list of evidence that Certmark use to issue their Codemark certificates, none of us know," Ms Swann said.