Donald Trump's summit with Kim Jong-un in Singapore on 12 June is back on, the US president says, a week after it was scrapped. 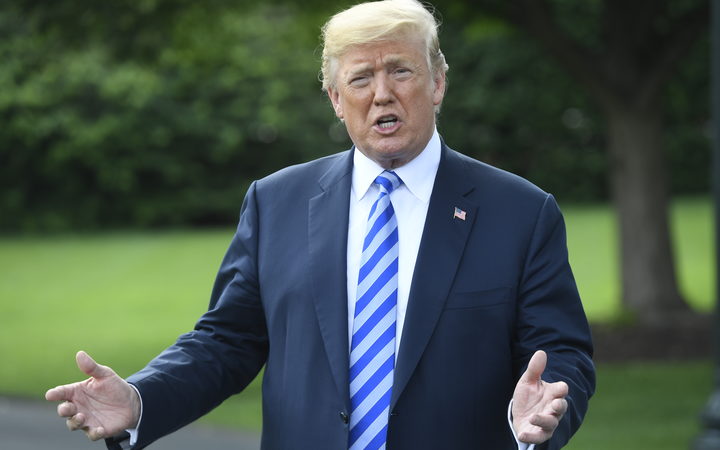 Mr Trump made the announcement after talks with a senior North Korean envoy at the White House.

He also said that North Korea "wanted to do denuclearisation", although the North did not confirm this.

The envoy, Gen Kim Yong-chol, hand-delivered a letter from the North Korean leader to President Trump.

Mr Trump said it was "a very interesting letter and at some point it may be appropriate" to share it. He later said he had not yet read it.

He also said the issue of human rights was not discussed.

The historic meeting between Mr Trump and Kim Jong-un would be the first between sitting US and North Korean leaders.

The opening of a letter from North Korea's leader, Kim Jong-un, which was hand-delivered by his top aide, Kim Yong-chol, to the president, is vintage Trump.

The letter itself is an old-fashioned gesture. But it captures the drama of a reality TV show and, in this case, reflects a high-stakes diplomatic one.

President Trump has spoken of the possibility of winning a Nobel Peace Prize for his negotiations with the North Koreans, and the delivery of the letter moves him closer to the summit and the talks.

Regardless of what happens with the letter or the summit, though, he's captured the world's attention again today - not to mention high ratings.

Who is Gen Kim Yong-chol?

Gen Kim has previously served as chief of Pyongyang's top military intelligence agency, and was sanctioned twice by US and South Korea for his role in supporting North Korea's nuclear and missile programme in 2010 and 2016.

His travel restrictions were lifted this week so he could fly to New York and Washington, DC to meet US officials, the Department of State said.

Gen Kim was accused of masterminding attacks on the South Korean warship Cheonan and Yeonpyeong Island in 2010.

He is also linked to the cyber-attack on Sony Pictures in 2014 and led the country's delegation to the 2018 Winter Olympics closing ceremony in South Korea's Pyeongchang earlier this year.

Pyongyang have denied any involvement in both incidents.

The former spy chief's current official position is vice-chairman of the Central Committee of the Worker's Party of Korea, but he rose to prominence as Pyongyang's chief military negotiator during inter-Korean talks between 2006-08.

He later served as director of the General Reconnaissance Bureau, tasked with cyber-warfare and gathering foreign intelligence, from 2009-16.

In 2016, he took charge of the United Front Department, the civilian intelligence agency which supposedly operates pro-North Korean groups in South Korea and handles inter-Korean affairs.