Residents in the south-eastern corner of Hawaii's Big Island have been told to evacuate immediately as fast-moving lava from Kilauea volcano approaches a major coastal highway. 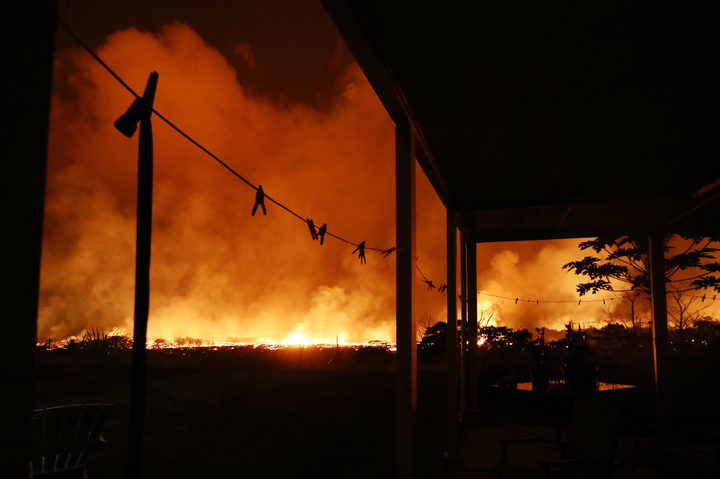 Lava from a fissure erupts and burns near a home on Hawaii's Big Island. Photo: AFP

As magma destroyed four more homes, molten rock from two huge cracks merged into a single stream, threatening to block escape routes. It was expected to hit Highway 137 overnight if it kept up its rate and direction of flow, the County of Hawaii's Civil Defense Agency said.

Authorities are trying to open up a road that was blocked by lava in 2014 to serve as an alternative escape route should Highway 137 or another exit route, Highway 130, be blocked, Jessica Ferracane of the National Park Service told reporters.

The park service is working to bulldoze almost a mile of hardened lava out of the way on nearby Highway 11, which has been impassable, she added.

Bushfires ignited by the molten rock have also been spreading and officials have been going from door to door to warn householders.

If the lava flow meets the ocean it could release highly toxic gases into the air.

Meanwhile, the first known serious injury has been reported after a man was hit by lava.

"A homeowner on Noni Farms Road who was sitting on a third-floor balcony got hit with lava spatter," said Janet Snyder, a spokesperson for the Office of the Mayor, County of Hawaii.

"It hit him on the shin and shattered everything there down on his leg," she said, adding that lava spatters "can weigh as much as a refrigerator and even small pieces of spatter can kill." No other information was immediately available. 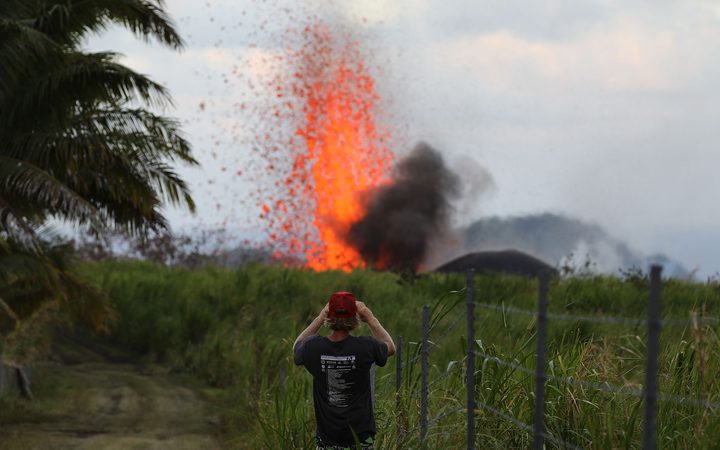 A man takes a photo of a lava fountain from a Kilauea volcano fissure on Hawaii's Big Island. Photo: AFP

For weeks, geologists have warned that hotter, fresher magma from Kilauea's summit would run underground and emerge some 25 miles (40km) east in the lower Puna district, where older, cooler lava has already destroyed 44 homes and other structures.

"There is much more stuff coming out of the ground and it's going to produce flows that will move much further away."

Fountains of bright orange lava were seen spouting at least 20-feet high, and spewing rivers of molten rock on Saturday.

Carolyn Pearcheta, operational geologist at the Hawaii Volcano Authority, told reporters that hotter and more viscous lava could be on the way, with fountains spurting as high as 600 feet (182 metres), as seen in a 1955 eruption.

"We've seen the clearing out of the system," she said. "We call that the 'throat clearing' phase."

At the volcano's summit, another large explosive eruption occurred around midnight, sending up a nearly two-mile-high ash plume (3.2km), according to the Hawaiian Volcano Observatory. There was another explosion around 4pm, according to a Reuters reporter.

Scientists expect a series of eruptions from Kilauea, one of the world's most active volcanoes, that could spread ash and volcanic smog across the Big Island, the southernmost of the Hawaiian archipelago.

Around 2000 residents of Leilani Estates and Laipuna Gardens housing areas near Pahoa, about 48km south of Hilo, were ordered to evacuate due to at least 22 volcanic cracks that have opened.

Many thousands more residents have voluntarily left their homes due to life-threatening levels of toxic sulfur dioxide gas spewing from vents in the volcanic fissures.