Gaza's hospitals are not coping with the victims of Monday's shootings, the United Nations' humanitarian arm says. 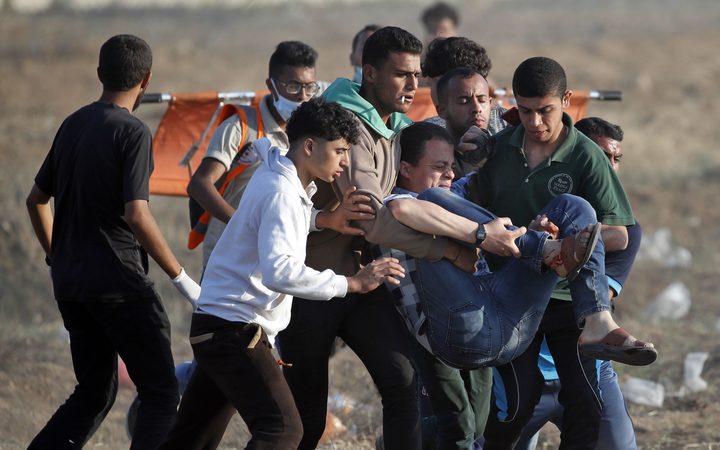 Palestinians carry away an injured protester who was shot in his leg during clashes with Israeli forces east of Gaza City. Photo: AFP

Funerals were held on Tuesday in Gaza for 58 Palestinians reported killed on Monday when Israeli troops opened fire during protests, in the deadliest day of violence there since a war in 2014.

Another death was reported on Tuesday - a 51-year-old man - but calm mostly prevailed as the dead were buried.

Israel has faced international condemnation over the deaths, from the UN, UK, France, Russia and others.

Israel has defended its actions, and the US has voiced its support.

UN humanitarian co-ordinator Jamie McGoldrick said any world capital would struggle with the number of patients from Monday's violence, but Gaza's medical facilities are already very fragile from years of being denied proper resources.

It comes as the US inaugurated its first embassy in Jerusalem, a controversial step by the Trump administration that broke with decades of US policy and incensed Palestinians.

Palestinians claim East Jerusalem as the capital of a future Palestinian state. Many see the US move as backing Israeli control over the whole of the city, which Israel regards as its indivisible capital.

Donald Trump's decision to relocate the embassy, announced in December, fuelled anger in Islamist-ruled Gaza, which is economically impoverished and under an Israeli and Egyptian blockade. Israel and Egypt say it is for their self-defence.

For seven weeks, protesters have gathered on the Gaza side of the border with Israel, with scores of deaths over that period before the violence ratcheted this week.

Among the dead on Monday were eight children, including a baby of eight months, Layila al-Ghandour, according to the Hamas-run health ministry. At least 2700 were reported injured.

No Israelis were reported killed or injured.

Many of the dead and wounded in Gaza were hit by sniper-fire, the health ministry said.

Israeli troops opened fire as protesters pushed towards the border fence that separates the Gaza Strip from Israel. Israel said its soldiers fired only at "targets of terrorist activity".

UN human rights spokesman Rupert Colville told reporters in Geneva on Tuesday that Israel's use of force was "not acceptable".

"The mere fact of approaching a fence is not a lethal, life-threatening act, so that does not warrant being shot," he said.

"It seems that anyone is liable to be shot dead."

He said international law makes it clear that "lethal force may only be used as a measure of last, not first, resort".

The majority of the wounded were shot in their lower limbs, Mahmoud Daher, an official at the World Health Organisation (WHO), told the Associated Press.

Israeli media has previously reported that troops at the border are instructed to first issue warning shots, then fire at protesters' legs.

Funerals began on Tuesday for some of the 58 people killed, coinciding with the day Palestinians call the "Nakba", or "catastrophe", which commemorates more than 700,000 Palestinians who fled or were expelled from their homes in the 1948-49 war surrounding Israel's creation.

"Every country has an obligation to defend its borders," he said.

The Israeli military said some 40,000 Palestinians had taken part in "violent riots" at 13 locations along Israel's security fence on Gaza's eastern border on Monday.

It said "at least 24 terrorists with documented terror background" were among those killed.

Demonstrations have been taking place at the border fence for the past seven weeks, as part of a protest branded the "Great March of Return". Palestinian protesters have hurled stones and incendiary devices and approached the border fence, which Israel has declared a no-go zone, on foot.

Israel's return fire has killed more than 100 people in that period and injured thousands.

At Shifa, Gaza's main hospital, men were queuing on Tuesday to give blood. They wanted to help the many wounded in Monday's violence.

Inside the hospital, there were many with gunshot wounds. Across Gaza, families were burying their dead. By midday there were no reports of new demonstrations.