The health ministry in Gaza says Israeli forces have shot dead three Palestinians in continuing protests on the border. 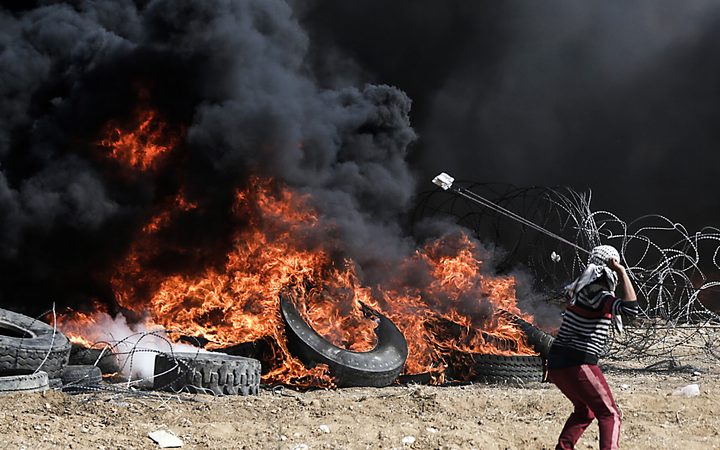 More than 300 others have been hospitalised for gunshot wounds and the effects of tear gas, the ministry says.

The Israeli army said more than 10,000 Palestinians had been rioting and its troops had fired in line with the rules of engagement.

This is the fifth consecutive week of mass protests.

The Palestinian protesters are demanding that refugees be allowed to return to ancestral land now in Israel.

Israel has accused Hamas, the militant group that controls Gaza, of using the protests as an excuse to launch attacks on Israel.

The protest movement is officially independent, but has the support of Hamas.

As on past Fridays, protesters gathered at five sites they have established near the perimeter fence.

The largest gathering was near Khan Yunis, where a small group of protesters crossed the border with Israel after cutting part of the fence wire.

The first death confirmed by Gaza's health ministry was that of 29-year-old Abdul Salam Bakr. The ministry said he was shot in the head by Israeli forces at the fence east of Gaza city.

Israel said hundreds of rioters had tried to burn the fence, and threw rocks and firebombs. Its soldiers used tear gas, rubber bullets and live fire.

Israeli troops have killed more than 40 people since the demonstrations began on 30 March. More than 5,000 are believed to have been wounded.

Organisers call the rolling protests the Great March of Return.

They will culminate on 15 May, the 70th annual commemoration of what Palestinians call the Nakba, or Catastrophe, of the displacement of hundreds of thousands of their people in the war which followed Israel's creation in 1948.

The human rights group Amnesty International called for a global arms embargo against Israel, accusing it of "carrying out a murderous assault" against Palestinian protesters.

Israel maintains it has acted legitimately to protect its civilians from militants trying to breach the border.

On Thursday, Israel's UN envoy, Danny Danon, told the Security Council that Hamas was responsible for Palestinian casualties, and accused the group of "hiding" far from the bloodshed while Palestinians died.

Hamas has denied the allegations.