New Zealand has conveyed its condemnation of Israel's actions along the Gaza border directly to its ambassador here, describing the loss of life as "devastating and one-sided". 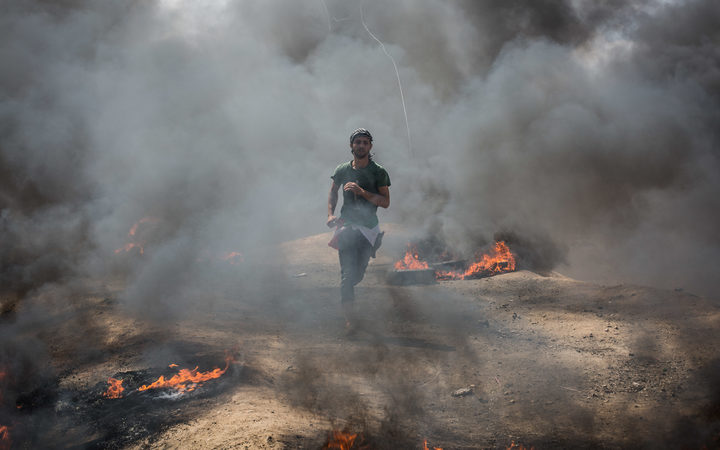 In the deadliest day of violence since the 2014 Gaza War, Israeli forces have killed at least 52 Palestinians and wounded 2400. Photo: AFP

In the deadliest day of violence since the 2014 Gaza War, Israeli forces have killed at least 52 Palestinians and wounded 2400.

Tens of thousands of Palestinians had been protesting along the Gaza border against the opening of the United States embassy in Jerusalem.

Prime Minister Jacinda Ardern said the Ministry of Foreign Affairs and Trade, on behalf of the government, raised concerns directly to the ambassador in New Zealand.

The violence showed that the decision by the US to open the new embassy was counter to efforts to find a peaceful resolution in the region, she said.

"At the time when the United States announced they'd be moving their representation to Jerusalem we stated strongly that we did not think that would take us closer to peace, and it hasn't," Ms Ardern said.

New Zealand also voted on a United Nations resolution emphasising the view that there should be a two-state solution, she said.

"This is a hotly contested issue within that peace process and as we've seen the results of the protest along the border of Gaza have been devastating."

Ms Ardern was asked for her view on comments made by Palestinian ambassador to the UN Riyadh Mansour, who said the Israeli action violated international law.

"It is the right of any nation to defend their border but this is a devastating, one-sided loss of life; we would condemn the violence that has occurred," Ms Ardern said.

"And I think it's plain to see the effects of this decision and the ramifications are wide reaching."

The Green Party has come out strongly against Israeli armed forces for being responsible for the "murder" of a least 53 civilians.

"Rather than being a step towards peace the embassy opening has acted as a flash point in the conflict and has been used by the Israeli government to justify their massacre of Palestinians."

Ms Davidson said the "slaughter" was evidence that President Trump's move made peace less likely, and life more dangerous for those living in Gaza.

National Party leader Simon Bridges said the case could be made for opening the new embassy, in terms of the US "standing on its rights".

"But ultimately it's hard to argue that this has made things more safe," Mr Bridges said.

It was "worrying and troubling" to see what was happening, and he was calling for restraint on both sides.

"But there's no doubt the US embassy in Jerusalem has inflamed things and it's a less safe situation as a result of that."