White House doctor Ronny Jackson has withdrawn as a nominee to lead the US Department of Veterans Affairs amid a flurry of misconduct allegations. 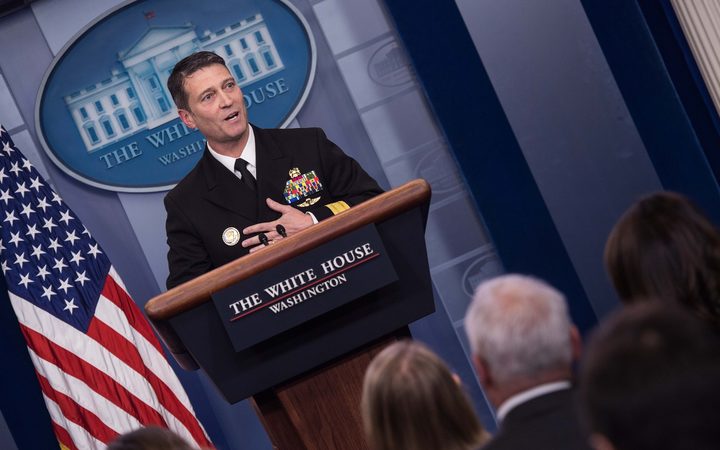 In a statement, Dr Jackson condemned "baseless and anonymous attacks" on his character.

He had been due to have a Senate confirmation hearing on Wednesday.

However, it was postponed because senators from both parties said they wanted to examine allegations by 23 of his colleagues and former colleagues.

The claims were outlined in a two-page document, details of which Democratic staff of the Senate Committee on Veterans' Affairs supplied to US media.

According to the file, Dr Jackson was described as "flat-out unethical", "100% bad temper", "toxic", "explosive", "abusive" and "volatile".

He was also branded "the most unethical person I have ever worked with", "dishonest" and "despicable".

They also said Dr Jackson would "lose his mind over small things", and was "vindictive" and "belittling".

In his statement, the 50-year old Iraq War veteran hit back: "I expected tough questions about how to best care for our veterans, but I did not expect to have to dignify baseless and anonymous attacks on my character and integrity.

"The allegations against me are completely false and fabricated."

The US Navy rear admiral has served as the White House physician since 2006. He made headlines after declaring Mr Trump to be in "excellent" health following a medical examination.

Dr Jackson told reporters that the president could live to the age of 200 if his diet improved.

Speaking by telephone to Fox News on Thursday morning, Mr Trump described Dr Jackson as the victim of "false allegations".

"They're trying to destroy a man," he added.

Senator Patty Murray, a top Democrat on the veterans committee, said this week: "It is really frustrating to me that this administration continues to not vet or sloppily send over a nominee that leaves us having to really vet them and look at serious questions."

The Republican president reiterated his repeated claim that Democrats are "obstructionists", blocking his candidates for political purposes.

Mr Trump has not said who he would nominate instead.

At a White House event honouring wounded soldiers later on Thursday however, he singled out the acting veterans affairs secretary Robert Wilkie, whose name was added at the last minute to the guest list.

Mr Trump told his audience Mr Wilkie "is doing a great job over at the VA, I can tell you that".

The president's daughter and adviser, Ivanka Trump, seemed to suggest Dr Jackson would remain in his current role.

She tweeted she would "look forward to continuing to see his warm smile each day at the White House!"