French President Emmanuel Macron has said he may have failed in efforts to persuade his US counterpart Donald Trump to retain an international nuclear deal with Iran. 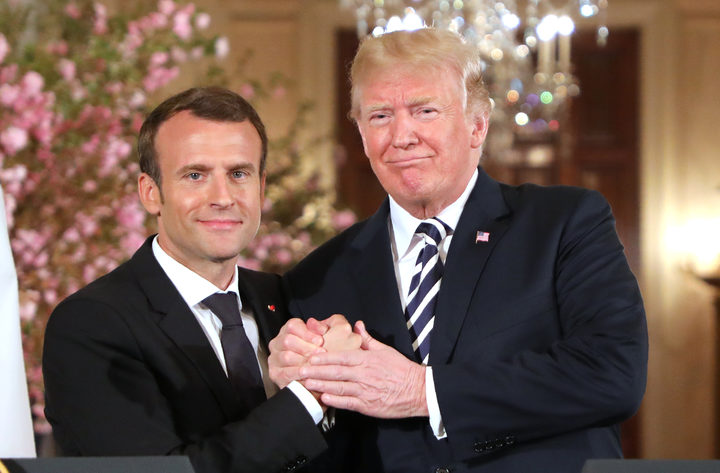 "My view is... that he will get rid of this deal on his own, for domestic reasons," Mr Macron told US media.

He added that he had "no inside information" as he wrapped up his three-day state visit to the US.

Mr Trump has until 12 May to decide on the deal, which aimed to prevent Iran acquiring nuclear weapons.

The US president has frequently criticised the agreement reached under his predecessor Barack Obama as lenient and has spoken about "doing a much bigger" deal.

Under the agreement, Iran agreed to mothball its nuclear programme in return for an easing of economic sanctions.

What did Macron say about the deal?

He had made changing the US president's mind on Iran a top priority for his visit but ended up admitting there was a "big risk" Mr Trump would abandon the deal.

He agreed with Mr Trump that any deal should include a wider agreement on Iran's influence in the Middle East and should cover the country's nuclear activities longer term, as well as its ballistic missile programme.

He said he would work with Mr Trump to build a "new framework" in the Middle East - and especially in Syria.

Why does Trump dislike the current deal?

Warning of "big problems" if Iran resumed its nuclear programme, Mr Trump said a "bigger" deal was possible but it must be built on "solid" foundations.

The US president has long complained that the accord - signed by the US, Iran, Europe, Russia, China and Germany - does nothing to halt Iran's support for militant groups in the region such as the Lebanese Shia Muslim group Hezbollah.

Mr Trump is also demanding that signatories to the pact agree permanent restrictions on uranium enrichment, a key part of any nuclear programme. Under the current deal these restrictions are set to expire in 2025.

In January, he signed a waiver suspending US sanctions on Iran for 120 days, saying this was the last time he would extend the sanctions relief. The next waiver is due to be signed on 12 May.

What other issues did the two presidents discuss?

While the two have developed a strong relationship, Mr Macron used his US state visit to raise differences on global trade and the environment.

In what appeared to be a thinly veiled attack on Mr Trump during his speech to the joint houses of the US Congress on Wednesday, Mr Macron denounced nationalism and isolationism.

Mr Macron said isolationism, withdrawal and nationalism looked "tempting... as a temporary remedy to our fears".

"But closing the door to the world will not stop the evolution of the world," he added. "It will not douse but inflame the fears of our citizens".

On the environment, he said the Trump administration was ignoring scientific consensus on global warming but he remained optimistic that the US might rejoin the Paris accord, which requires countries to limit the global rise in temperature attributed to emissions.

"I'm sure one day the US will come back and join the Paris agreement," the French leader said.