US President Donald Trump has warned Iran of "big problems" if it resumes the nuclear programme it agreed to curb in a 2015 international accord. 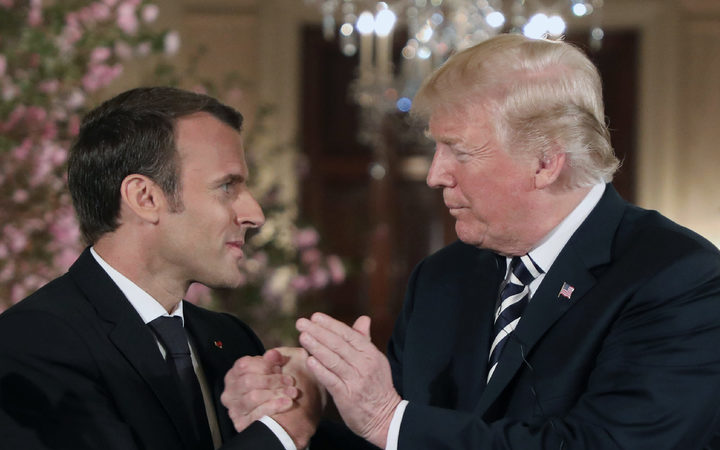 Mr Macron, who is lobbying Mr Trump to preserve the deal, said it was possible to forge a new Iran accord.

The US president has been threatening to reject an extension of the Obama-era nuclear pact by a 12 May deadline.

Germany's Chancellor Angela Merkel is due to visit the US capital on Friday to make a last-minute bid to dissuade Mr Trump from potentially torpedoing the Iran agreement.

"It won't be so easy for them to restart," Mr Trump said in the Oval Office on Tuesday when a journalist asked him about the possibility of Iran relaunching its nuclear programme if the deal is scrapped.

"They're not going to be restarting anything. They restart it they're going to have big problems, bigger than they've ever had before.

"And you can mark it down - they restart their nuclear programme, they will have bigger problems than they've ever had before."

Mr Trump's stark warning comes a day after Iranian President Hassan Rouhani threatened "severe consequences" if the US withdraws from the nuclear deal.

Mr Rouhani did not specify what retaliatory action Tehran might take. But his Foreign Minister, Javad Zarif, has said a probable response would be to restart the enrichment of uranium - a key bomb-making ingredient.

Mr Macron is the first foreign leader to be treated to a state visit during the Trump presidency.

At a joint news conference later on Tuesday, Mr Macron said he had had a very frank discussion with Mr Trump.

The French president told reporters he believes it is possible to forge a new agreement on the Iran issue.

"We want sustainable stability and I believe the discussions we've had together make it possible to open the way, to pave the way for a new agreement," said Mr Macron.

Under the deal, Tehran agreed to mothball its nuclear programme, which it maintains was for peaceful civilian purposes, in return for an easing of economic sanctions.

Mr Trump has long complained that the accord - signed by the US, Iran, Europe, Russia, China and Germany - does nothing to halt Iran's support for militant groups in the region such as Hezbollah.

The US president is also demanding that signatories to the pact agree permanent restrictions on Iran's uranium enrichment. Under the current deal they are set to expire in 2025.

"We do have a very special relationship," Mr Trump told journalists gathered in his office.

"In fact I'll get that little piece of dandruff off.

"Little piece! We have to make him perfect. He is perfect."

The Iran deal is not the only potential source of discord between the two leaders.

Also on the agenda is the Paris climate accord, the US decision to recognise Jerusalem as the capital of Israel, and planned US tariffs on EU steel and aluminium.

Earlier in the day, Mr Macron and his wife were welcomed to the White House with a military ceremony and a 21-gun salute.

In welcoming remarks, Mr Trump thanked France for joining the US and Britain earlier this month in launching air strikes after an alleged chemical attack in Syria.

On Tuesday evening, the White House will host an official state dinner for the Macrons, who will be served lamb and jambalaya, a traditional Cajun stew.