The Pope has called for an end to the "carnage" in Syria during his Easter message from the Vatican. 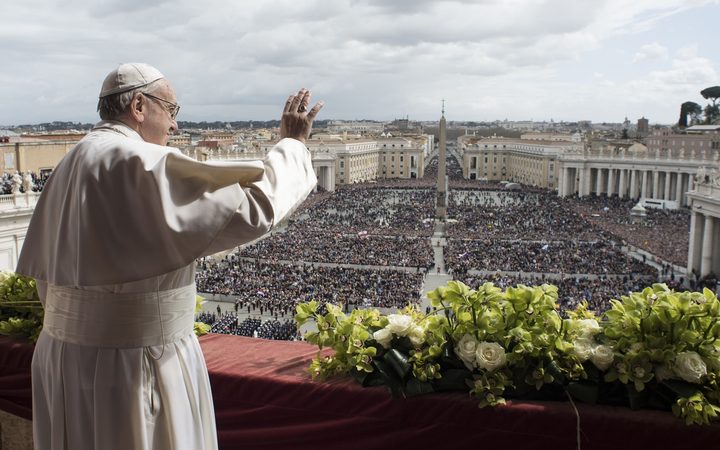 Pope Francis delivers the "Urbi et Orbi" blessing to the city and to the world from the balcony of St Peter's basilica after the Easter Sunday Mass on April 1, 2018 in Vatican. Photo: AFP

He also asked God to heal the wounds in South Sudan and the Democratic Republic of Congo, and urged dialogue on the Korean peninsula.

Pope Francis said the power of the Christian message gave hope to the deprived.

This included migrants and refugees who he said were "so often rejected by today's culture of waste".

Thousands of people were in St Peter's Square to hear him speak from the balcony of the basilica.

"Today we implore fruits of peace upon the entire world, beginning with the beloved and long suffering land of Syria whose people are worn down by an apparently endless war," said the Pope.

"This Easter may the light of the risen Christ illuminate the consciences of all political and military leaders, so that a swift end may be brought to the carnage in course; that humanitarian law may be respected; and that provisions be made to facilitate access to the aid so urgently needed."

During the first five years of his reign, Pope Francis has been consistently outspoken in condemning the Syrian conflict. In 2013, he was credited with leading moral opposition to Western military intervention, according to BBC Vatican correspondent David Willey.

Turning to the wider region, he said on Sunday: "We beseech fruits of reconciliation for the Holy Land, also experiencing in these days the wounds of ongoing conflict that do not spare the defenceless, for Yemen and for the entire Middle East, so that dialogue and mutual respect may prevail over division and violence."

The Archbishop of Canterbury also offered a message of peace and hope in his Easter address on Sunday.

Speaking at Canterbury cathedral, Archbishop Justin Welby stressed the importance of maintaining hope - but he also said the church should admit when it made mistakes.

What is Urbi et Orbi?

On relations between North and South Korea, the Pope said he hoped talks aiming to ease longstanding tensions on the Korean peninsula would "advance harmony and peace".

"May those who are directly responsible act with wisdom and discernment to promote the good of the Korean people and to build relationships of trust within the international community."

The Pope also expressed hope for an end to violence and division in Ukraine and Venezuela.

The pontiff was speaking in an "Urbi et Orbi" address from the famous central balcony at St Peter's Basilica at the Vatican, in front of tens of thousands of the faithful.

The Latin phrase means "to the city [of Rome] and the world" and the special address is employed only a few occasions - at Christmas, at Easter and just after being elected pontiff.