Pope Francis, starting four days of Easter, said the Catholic Church must always be a refuge for the needy and delivered a sermon on the need for priests to live a simple, poor life. 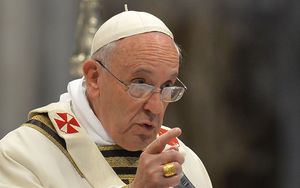 At St. Peter's Basilica on Holy Thursday, Francis described the Church as "a house with open doors, a refuge for sinners, a home for people living on the streets, a place of loving care for the sick, a camp for the young, a classroom."

Francis and other priests then renewed the vows they took on the day of their ordination and he blessed oils to be used in administering sacraments during the year.

In the afternoon, the pontiff travelled to a rehabilitation centre on the outskirts of Rome for a service where he washed and kissed the feet of 12 sick and disabled people.

"In our hearts at this moment, let each one of us think of the other ... and how we can each help each other," he said a short, simple sermon.

Continuing a pratice he started when he was archbishop of Buenos Aires, Francis holds the service in poorer neighbourhoods with ordinary people as a sign of his desire for the Church to be closer to the suffering and the needy.

Last year it was held in a juvenile prison where the pope and washed and kissed the feet of women and Muslim inmates.

On Good Friday and Holy Saturday, Francis will preside at three services leading up to Easter Sunday, when he delivers his "Urbi et Orbi" (to the city and the world) blessing and message.

On Sunday, Francis will canonises Pope John Paul II, who reigned from 1978 to 2005, and Pope John XXIII, who was pontiff from 1958 to 1963 and called the Second Vatican Council, a landmark meeting that modernised the Church.