Pope Francis has preached an Easter message of hope after a grim week in Europe, calling on Christians not to let fear and pessimism "imprison" them. 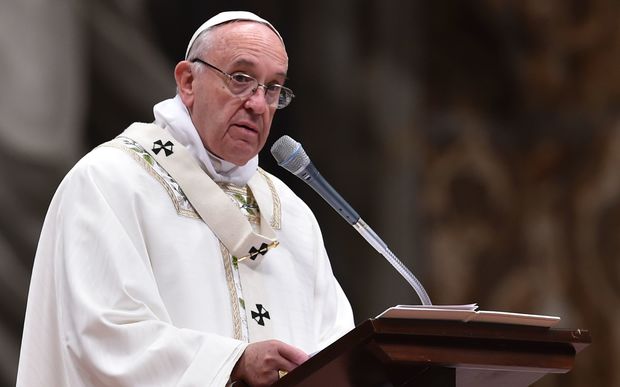 Speaking amid tight security at the Vatican, the Pope said: "Let us not allow darkness and fear to distract us and control our hearts."

His message followed a condemnation on Friday of the Brussels terror attacks.

Islamist violence is expected to be a prominent theme of his traditional "Urbi et Orbi" Easter message.

Many pilgrims cancelled their planned trips to Rome in the wake of the violence in Brussels, but St Peter's Basilica in the Vatican was packed when Pope Francis celebrated mass on Saturday evening.

The Pontiff entered a darkened basilica with just a single candle guiding him. As he reached the altar, the basilica's floodlights came on to symbolise the resurrection of Jesus Christ.

Delivering his homily, Francis said: "Today is the celebration of our hope. It is so necessary today."

The lengthy vigil service also included a papal baptism for 12 adults hailing from China, South Korea and other countries around the world.

On Friday, he denounced the "terrorist acts committed by followers of some religions which profane the name of God and which use the holy name to justify their unprecedented violence".

The police presence in the streets around the Vatican has been stepped up this year, as more pilgrims than usual are expected after Francis declared a jubilee year for the Catholic Church, calling it a "Holy Year of Mercy".